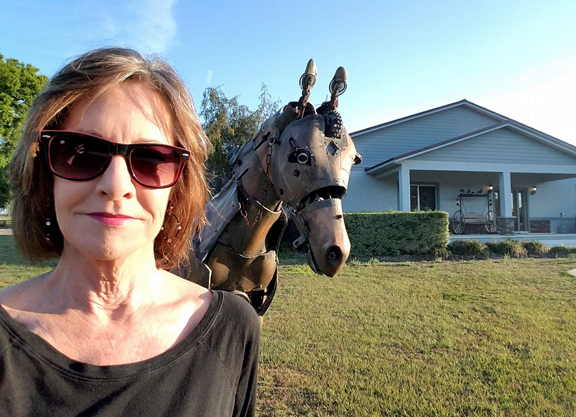 A most unusual offering will be up for sale at the OBS March Sale of 2-Year-Olds in Training. The last hip to go through the ring on Tuesday, Mar. 16, will be “Clockwork Fury,” a horse statue with an intriguing history that is part of the Horse Fever 20/20 public art project. The public art, which features life-sized horse statues by various artists, has given over $350,000 in grants to artists and organizations.

Breeders will be familiar with Clockwork Fury as he has greeted visitors at Ocala's Journeyman Stud, owned by Brent and Crystal Fernung, for the past decade. The winning bidders of the statue about 10 years ago recently had him upgraded by his original artist, Mark Hershberger, and are sending him through the ring to raise funds for Florida Thoroughbred Charities (FTC) and Marion Cultural Alliance (MCA).

“This past year [due to the COVID-19 pandemic], FTC didn't get to have their gala, had to cancel their big golf tournament. They lost a lot of money,” said Crystal Fernung. She said FTC supports Second Chances, where incarcerated women care for retired racehorses and get vocational training in horse care. “Second Chances is such a great program. I drive by it every day. With FTC being the major source of income, we thought if there was a way we could donate 'Fury' and get him sold, we could help. OBS is a game changer.

“Anyone from anywhere can buy him,” continued Fernung. “Creech Horse Transportation has philanthropically offered to deliver him to wherever they have a truck going. We'll have internet bidding and people can see him in person at the [OBS] January sale [Jan. 26-27].”

Clockwork Fury is the official anniversary ambassador for the Horse Fever project, but is unique in that he has been donated back to the program by the Fernungs. His recent upgrade by his original artist has been monumental. 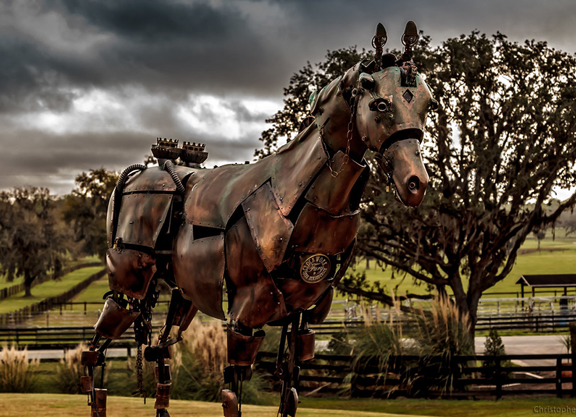 “He's made it through four hurricanes,” said Fernung. “There's bluebirds that come to nest in him every year. Mark has preserved their nest and placed it inside him. Now he has 2020 technology, has fiberoptics in him. There's so much more Mark could do now. He's fiberglass, like all the others. But when Mark created him 20 years ago, he had him cut up in different shapes, painted him to look like metal, then put all that back together. His eyes are antique opera glasses that Mark had found. His star is a solar panel. His tail is these big, heavy chains, and when you move his tail, his head moves. We had no intentions of buying anything when we saw him 10 years ago, but when Mark had dry ice coming out of his hips and nose, it was, 'Whoa.' When they knocked him down to us for $15,000, Brent looked at me like, 'What did you just do?'”

Fernung said she wants the “horse” that has served their farm so well to be able to continue to help others by the use of his proceeds.

This will be the fourth Horse Fever event in Ocala after projects in 2000, 2005, and 2011. Many of the statues from the earlier installations can still be seen around Ocala, while some have even traveled out of state. There will be a total of 15 horses for Horse Fever 20/20, all of which are scheduled to be unveiled Feb. 8. For more information, visit mcaocala.org/hf-2020.