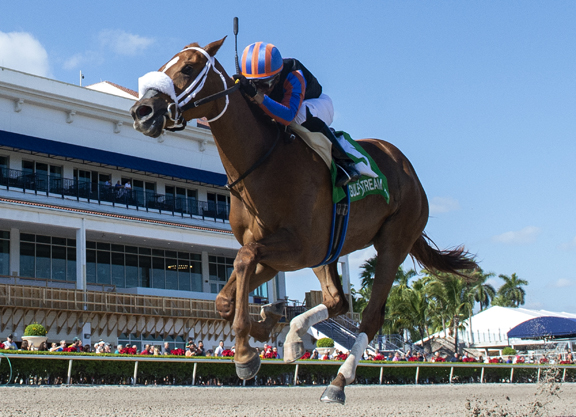 A pair of sophomores from trainer Saffie Joseph's barn tuned up for graded stakes engagements with five-furlong works at Gulfstream Park Sunday.

“I worked him Monday last week, so he came back in six days. I wanted to get a good work into him and he worked super. He finished up really good. He ran the last quarter in :22 4/5 and galloped out strong,” Joseph said. “After that work today, I'd say we're probably going to run him in the Haskell, 95% sure.”

Ny Traffic, third in the GII Risen Star S. in February, was runner-up in both the Mar. 25 GII Louisiana Derby and the May 23 GIII Matt Winn S.

“Last week's work was a little quicker than ideal, so we just tried to slow her down a little. Once again, she worked super. We're very happy with where we are with her,” said Joseph.

Tonalist's Shape, winner of the GIII Forward Gal S. in February and GII Davona Dale S. Feb. 29, was a well-beaten seventh while trying a route for the first time in the Mar. 28 GII Gulfstream Park Oaks, but rebounded to win the 1 1/16-mile Hollywood Wildcat S. May 15 at Gulfstream in her most recent start. She currently ranks seventh in qualifying points for the Sept. 4 GI Kentucky Oaks.

Math Wizard (Algorithms), who gave Joseph his first Grade I success in last year's Pennsylvania Derby at Parx, breezed a half-mile in :49.14 (16/58) in preparation for the GIII Monmouth Cup on the Haskell undercard.