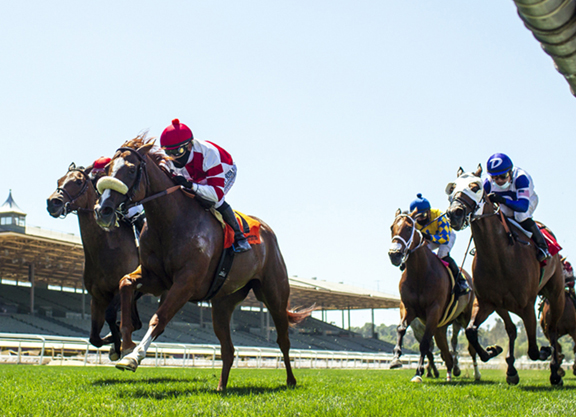 An undefeated Group 1 winner at home, Jolie Olimpica launched the U.S. portion of her career with a handy tally in this event last year and reported home a half-length to the good in the Monrovia in May. The chestnut was a bold second to Eclipse Award candidate Rushing Fall (More Than Ready) in the GI Jenny Wiley S. at Coolmore July 11 and was to have resurfaced in the GI Matriarch S. at Del Mar last month, only to have that comeback attempt derailed by a foot bruise. Hall of Famer Mike Smith retains the mount for Richard Mandella.

Oleksandra has faced the boys in her two most recent visits to the races, defeating Kanthaka (Jimmy Creed) by a neck in the GI Jaipur S. at Belmont June 20 before hitting the sidelines. She was set a bold task making her return to action as a 13-2 chance in the GI Breeders' Cup Turf Sprint at Keeneland Nov. 7, but always raced well back and was left far too much to do late, finishing ninth and beaten five lengths. The new, flat six-figure configuration at Santa Anita could work in her favor.

LNJ Foxwoods' Lighthouse (Mizzen Mast) will look to be the fly in the ointment of the favorites. She acquitted herself nicely against her peers in 2020, running the talented Laura's Light (Constitution) to three-parts of a length in the GIII Sweet Life S. last Februrary before closing the season with an 11-1 upset of the valuable Music City S. at Kentucky Downs Sept. 15. She was also a bang-up second against older fillies and mares in Del Mar's Daisycutter H. in August.