Johannesburg: A Trailblazer Twenty Years On 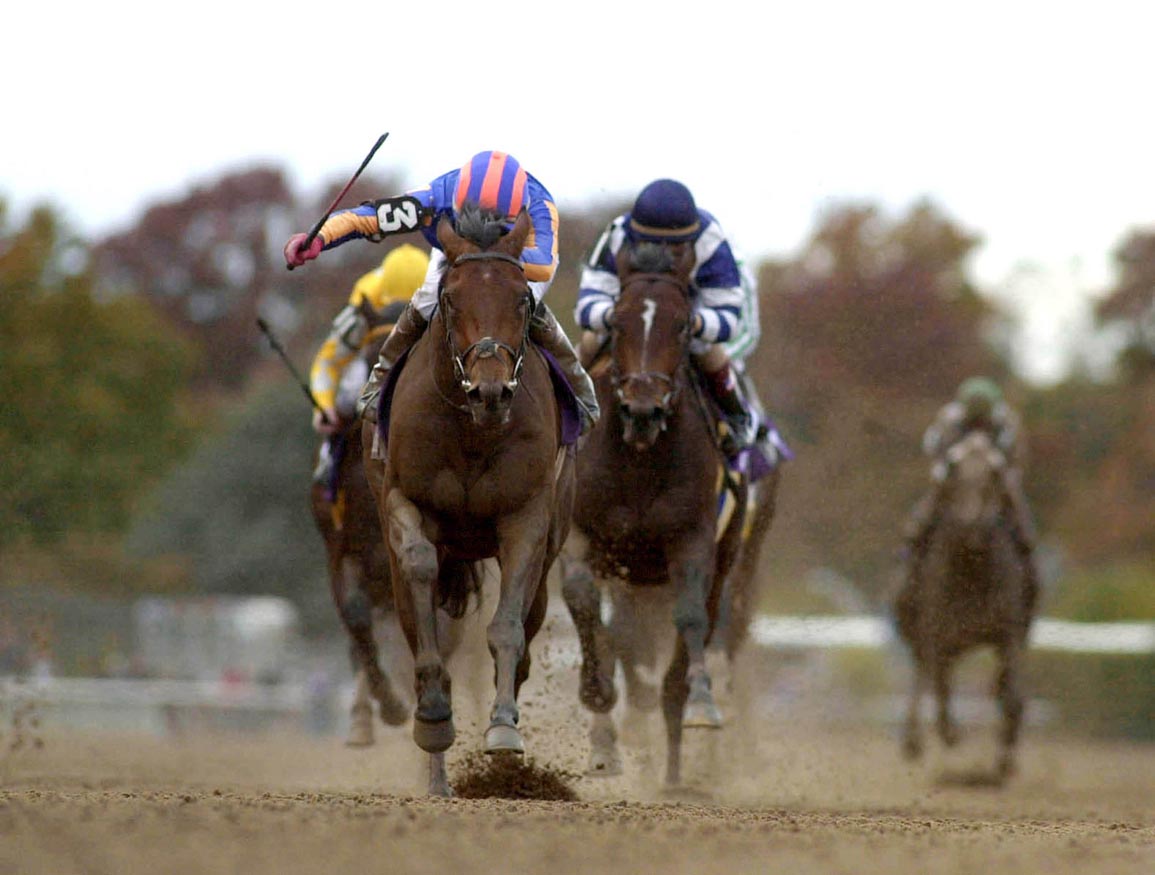 Del Mar, CA–While the bridge between the European turf and the American dirt is one that is rarely crossed nowadays, it has historically been the path to some of the greatest payoffs-at both the parimutuels and in the realms of international ratings and stud value-at the Breeders' Cup World Championships.

In 1991, Sheikh Albadou forged the path when backing up a win in the G1 Nunthorpe S. and runner-up efforts in the G1 Sprint Cup and G1 Prix de l'Abbaye into a first victory for a European-trained runners in a Breeders' Cup dirt race when he shocked older horses at 26-1 in the GI Breeders' Cup Sprint. The victory for the Alex Scott-trained 3-year-old provided compensation for pundits of European racing who saw the continent's great sprinter Dayjur snatch defeat from the jaws of victory just a year prior when jumping a shadow inside the final furlong of the Sprint and conceding his lead to the champion filly Safely Kept.

Indeed, Sheikh Albadou holds the coveted title of first European-trained horse to win a Breeders' Cup dirt race by a mere few hours. Later that same day at Churchill Downs, the Francois Boutin-trained Arazi came along and posted the widest-margin victory on the card and one of the great performances in the history of the meeting when rolling past the American favourite Bertrando (Skywalker) to take the Breeders' Cup Juvenile by a runaway five lengths.

While the Andre Fabre-trained Arcangues and John Gosden's Raven's Pass secured their places in history by downing America's very best in the meeting's marquee GI Breeders' Cup Classic in 1993 and 2008, respectively, it was the juvenile that once again produced a memorable result for the European contingent at Belmont Park in 2001, and 20 years on one can still look back on the performance of Johannesburg in the Juvenile-and the ambitious campaign that preceded it-with admiration.

Bred in Kentucky by Wayne G. Lyster and Jayeff 'B' Stables out of the winning Ogygian mare Myth, Johannesburg was selected by Demi O'Byrne out of the 2000 Keeneland September Yearling Sale for $200,000. Joining trainer Aidan O'Brien, Johannesburg was sent off favourite for his first trip to the post at Fairyhouse on May 30, 2001 and came home a cozy 3 1/2-length winner under Mick Kinane. Johannesburg would maintain favouritism for his next five outings and didn't once disappoint, sweeping Royal Ascot's G3 Norfolk S. and The Curragh's G3 Anglesey S. before picking off his first Group 1 when coming home a five-length winner of the G1 Phoenix S. Fourteen days' rest proved plenty for Johannesburg when he wheeled back to win the G1 Prix Morny, and he once again easily had the measure of the French-trained Zipping (Ire) (Zafonic) when taking the Dewhurst by three lengths, completing a rare European juvenile Group 1 treble.

By the autumn of 2001, the 32-year-old Aidan O'Brien was flying high. Just months removed from his first Derby win with Galileo (Ire), the young O'Brien loaded up his largest contingent yet for the Breeders' Cup (seven) at Belmont Park. O'Brien had sent out seven runners in the three Breeders' Cups prior, his first runner at the event being the 1998 Mile sixth-place finisher Second Empire (Ire) (Fairy King). Entering the 2001 Breeders' Cup, O'Brien had not yet had a winner at the meeting, though Giant's Causeway's thrilling throwdown when finishing second to Tiznow in the Classic at Churchill Downs in 2000 doubtless emboldened O'Brien to continue rolling the dice on the dirt with his European stars-let us not overlook, of course, that Giant's Causeway and Johannesburg were both American-breds from the Storm Cat sireline.

O'Brien's day at the Breeders' Cup on Oct. 27, 2001, started decently enough, with Bach (Ire) (Caerleon) finishing best of his first three runners to pick up third in the Mile. Johannesburg, however, would take things into an entirely different stratosphere in the Juvenile. Not favoured for the first time in his career, with punters coming in droves for the GI Champagne S. winner Officer and also the GI Hopeful S. scorer Came Home, Johannesburg was let go at more than 7-1 and was initially caught flat-footed when the gates opened. The European champion was soon slicing up the rail, however, under Kinane, and by the time they passed the second furlong Johannesburg was stalking the front-running duel of Officer and Came Home, who were locked neck-and-neck while setting honest but not breakneck fractions. Officer had his head in front at the top of the lane but it was soon apparent he was in deep, with Siphonic squeezing through on the fence to head him, while in behind Johannesburg took back briefly to find clear runway. Once he did, the race was sewn up in a matter of strides, with Johannesburg unleashing a powerful turn of foot to sweep past the front runners while holding at bay the fast-finishing longshot Repent. Officer-whose sire Bertrando was incidentally second to Arazi as the heavy favourite in the same race 10 years prior and runner-up to Arcangues in the Classic two years later-could manage just fifth.

Johannesburg's light on the racecourse would not linger much longer; he made just three starts at three and failed to find the winners' enclosure. His legacy has endured, however, at stud, largely through his highly influential son Scat Daddy, who provided a Breeders' Cup winner of his own in 2017 with the Coolmore-owned, O'Brien-trained Mendelssohn in the GI Juvenile Turf. While the Juvenile on the dirt continued to be a happy hunting ground for European raiders through the first decade of the century-with Wilko (Awesome Again) winning under Frankie Dettori at 20-1 at Lone Star Park in 2004 and Godolphin's Vale Of York (Ire) (Invincible Spirit {Ire}) springing a 25-1 upset at Santa Anita in 2009-the more recent addition of the juvenile turf races to the Breeders' Cup programme has ushered in a new era for international participation at the meeting. And just as Johannesburg had announced his ambitious young trainer's arrival on the global stage in 2000, so too did Outstrip (GB) (Exceed and Excel {Aus}) in the 2013 edition of the Juvenile Turf, when he provided his fledgling trainer Charlie Appleby with a first Breeders' Cup victory just four months into his training career. This weekend, fresh off a stellar European season in which he recorded his second Derby win in four years, among many other highlights, Appleby brings a team of six to Del Mar with now three Breeders' Cup winners to his name.

Could his Juvenile Turf contenders Modern Games (Ire) (Dubawi {Ire}) or Albahr (GB) be the 2022 Derby winner? Del Mar to Epsom Downs may seem a large gap to bridge, but that is exactly the route taken by Appleby's 2018 Derby winner Masar (GB) (New Approach {Ire}), who parlayed a sixth-place finish behind Mendelssohn in the 2017 Breeders' Cup Juvenile Turf into blue riband glory seven months later. Remarkably, the next year's edition of the Juvenile Turf at Churchill Downs produced another also-ran Derby winner in Anthony Van Dyck (Ire) (Galileo {Ire}), with the GI Preakness S. scorer War Of Will also down the field.

So what is it about the Breeders' Cup that has made it such a successful springboard to Epsom? Perhaps the ability to navigate the tighter turns of American tracks transfers to a penchant to skip across the twists and turns and cambers of the Derby course that is the undoing of so many. Perhaps the horse with the constitution to cross the Atlantic and bear the stresses of Breeders' Cup week is equally suited to overcome the mental challenges of the blue riband. Perhaps it is simply the rarity of a trainer brave and ambitious enough to attempt both.

Last year's Juvenile Turf fifth Sealiway (Fr) (Galiway {GB}) couldn't quite bridge the Classic gap this year, finishing second to St Mark's Basilica (Fr) (Siyouni {Fr}) in the G1 Prix du Jockey Club, but after an extended summer holiday the Cedric Rossi trainee signaled an indication of things to come with a respectable fifth in the G1 Prix de l'Arc de Triomphe, followed by a 12-1 victory in the G1 Champion S. Sealiway is handled by another relative newcomer to the training ranks, Cedric Rossi, who inherited the horse from his uncle Frederic this autumn and who himself saddles his first Breeders' Cup runner this weekend in the G1 Prix de l'Opera scorer Rougir (Fr) (Territories {Ire}).

Rossi is a member of a new era of young trainers in Europe hungry to make their name on the international stage, and it has been refreshing to hear the views of–and see in action this week–the likes of Dave Loughnane, Michael O'Callaghan, James Ferguson, George Boughey and Henk Grewe as they saddle their first Breeders' Cup runners. These young trainers can take heart from the accomplishments of both Aidan O'Brien and Charlie Appleby, as well as Aidan's son Joseph, who earned his own first victory at the Breeders' Cup as a trainer at the age of 26 in 2019, beating his father to the mark by no fewer than six years.

O'Brien, for his part, has continued to be a treasured international ambassador for the Breeders' Cup 20 years after his first win at the meeting. He is the Breeders' Cup's second all-time leading trainer by money won, his $26.6-million second only to Bob Baffert. O'Brien has continued to heavily patronize the meeting's turf races and has also still periodically rolled the dice on the dirt, recent gambles including Gleneagles (Ire) (Galileo {Ire}), Mendelssohn and Declaration Of War (War Front) in the Classic-the last of which came a quarter-length from being pulled off-and US Navy Flag (like Johannesburg, a European champion 2-year-old–in the Juvenile.

The likes of Johannesburg, Arazi, Arcangues and Sheikh Albadou–and the pioneering spirit of their respective connections–were pivotal in opening the door for widespread overseas participation at the Breeders' Cup, and it will be fascinating to see what chapters are added to this ongoing story at Del Mar this weekend.