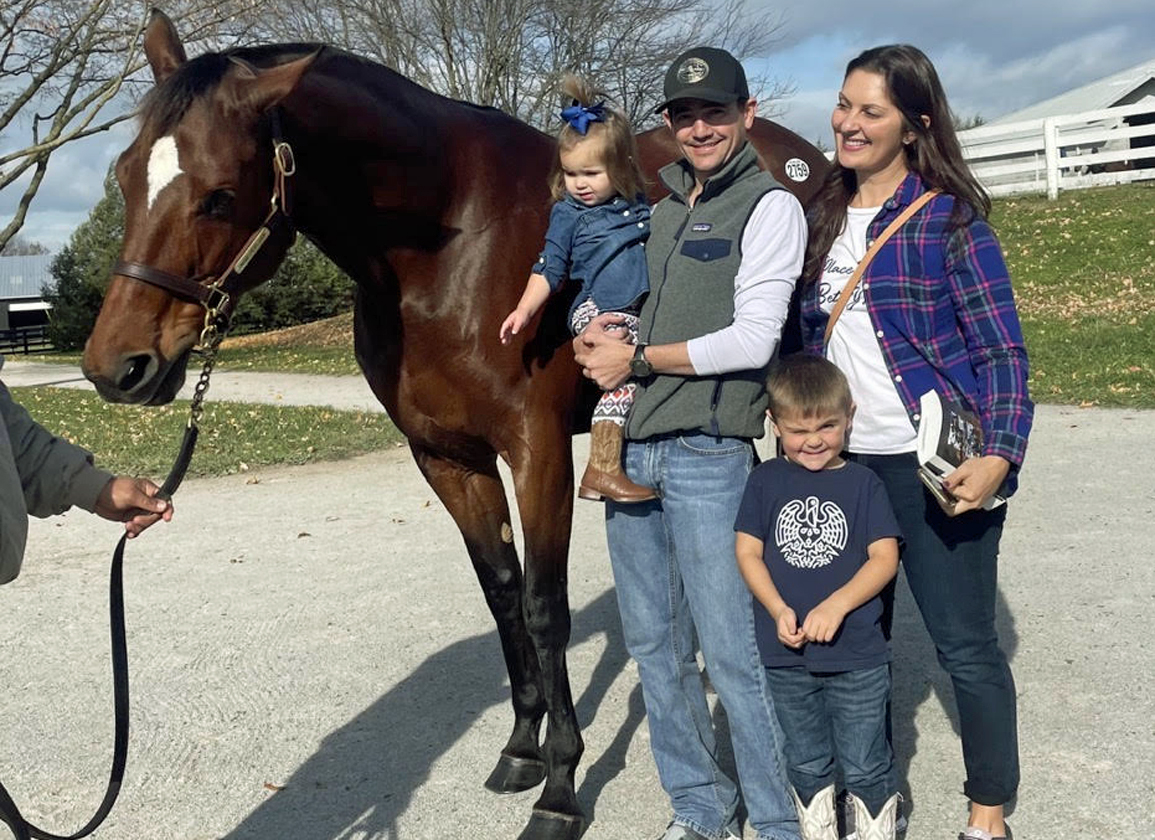 Brian Hernandez, Jr. rode three races at Churchill Downs Wednesday. He made it to the winner's circle in race nine, but that wasn't the only excitement of the day for the jockey.

Earlier that morning, he and his family posed alongside a bay mare named Unbridledexplosion (Eddington) outside of Barn 46 at Keeneland. Hernandez had ridden the mare in all but three of her 18 career starts. Now, he is her new owner.

“This is the first mare my wife and I have purchased on our own,” Hernandez said. “We bought a farm in Simpsonville a few years ago and have been putting up lay-ups for the last couple of years, but we've always discussed that one of these years we were going to go over to Keeneland and buy a mare to learn a different aspect of the game.”

New adventures in the game our whole family loves is always fun!!! https://t.co/jEhNipZ4Y8

Hernandez and his wife Jamie were in Del Mar for the Breeders' Cup earlier this month when Jamie was flipping through the Keeneland November catalogue while sitting in their hotel one afternoon. She landed on Hip 2759.

“She loved this mare,” Hernandez said. “She's really high on Mitole and so she wanted a Mitole baby. When she showed me her catalogue page, I was like, 'Man, I think I rode that mare.' Sure enough, I'd ridden her for Ian [Wilkes] for her whole career.”

With Hernandez aboard, Unbridledexplosion broke her maiden as a 3-year-old at Churchill Downs in June of 2014. She ran second in five of her next six starts against allowance company before adding consecutive wins to her resume in the spring of 2015–both at Churchill Downs under Hernandez. Over her three-year career, which included five tries against stakes company, Unbridledexplosion ran in the money in 12 of her 18 starts, collecting over $200,000 in earnings.

“I always remembered her as a really hard-trying mare,” her jockey recalled. “She was second five different times in some pretty tough allowance races between Keeneland, Saratoga and Churchill. It was always in the back of my mind that she was a hard-trying mare.”

After retiring from racing, Unbridledexplosion produced a Wicked Strong colt in 2018 that has not raced followed by an Upstart colt named Unbridled Bomber who broke his maiden for Jim Ryerson at Belmont Nov. 7. She also has a yearling filly by Unified. The mare's female family includes GISW Declassify (Orientate) and GSW Life's a Parlay (Uncle Mo).

“Jamie had her heart set that she wanted this mare,” Hernandez said. “She and her mom were doing the bidding. We had agreed on a certain price and we got her below our limit, so we were all excited. My father-in-law [Jake Radosevich] signed the ticket. She was consigned by Lantern Hill Farm with Suzi Shoemaker. We sent her back to Suzi and we're going to let her foal her out. Then we'll breed her next year after we see what kind of baby we get.”

This week's purchase is not the Hernandez family's first foray in the breeding business. In partnership with Ian and Tracey Wilkes, they bred the War Front mare Social Amber to Hernandez's 2012 GI Breeders' Cup Classic-winning mount Fort Larned for the past two years. The 2-year-old, named Gus Gus, ran second to a next-out allowance winner at Ellis Park this summer. The yearling colt is already named Justblamethejock.

Hernandez said that their three children added further incentive to jump into the breeding game on their own.

“Our kids all have horses out at the farm and they love them,” he said. “They love going to the races too so we wanted to give them a different avenue with something that gets them excited that they can watch along the way.”