Jim Dandy Next for Creator & Exaggerator 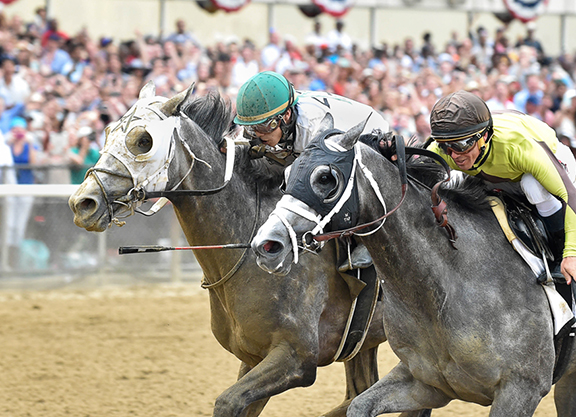 While Monmouth Park may have landed the biggest name in the 3-year-old male ranks in GI Kentucky Derby winner Nyquist (Uncle Mo) for the GI Betfair.com Haskell, it appears that he won't be joined in the gate by fellow Triple Crown winners Exaggerator (Curlin) and Creator (Tapit).

Matt Bryan, who heads Big Chief Racing, which owns the GI Preakness S. winner, said he is 90% sure his colt will bypass the Haskell and run instead in the GII Jim Dandy S. July 30 at Saratoga.

“It has nothing to do with not wanting to run against Nyquist,” Bryan said. “It's more of a case that the horse will be stabled in Saratoga. With our main goal being the [GI] Travers, we just think it makes more sense to run over the track he'll be training over, stay in the same barn and not have to move from track to track. He's already won in Saratoga in the [GII Saratoga Special last year] and, hopefully, he can do so again. They do a great job at Monmouth and they give you a lot of incentives to go there. We just thought this was the right path to take.”

As for GI Belmont S. winner Creator, he had a :49 2/5 workout at Saratoga Tuesday and WinStar Farms President and CEO Elliott Walden reports that all systems are go for their horse to make his return in the Jim Dandy.

“We're looking at the Jim Dandy because that track suits him a little better,” Walden said. “He's doing very well. He's had two works now. He worked at Churchill last week. He's settled in well and we're looking forward to see how he runs in Saratoga.”

If the three Triple Crown winners are to meet anytime before the GI Breeders' Cup Classic it would almost have to happen in the GI Travers Aug. 27. The Nyquist camp, however, has not committed to any races beyond the Haskell.