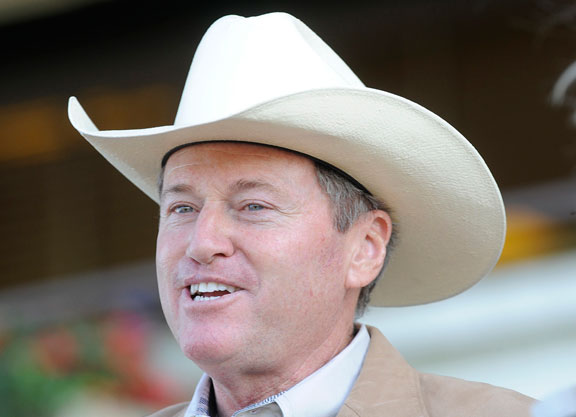 Just Jenda took her record to a perfect three-for-three with a professional victory in the Caesar’s Wish S. at Laurel Park Saturday.

Making her stakes bow, the 2-5 favorite chased the early pace from third through an opening quarter in :24.70. She rushed up and pulled her way to the lead after a half in :48.64 and was never seriously challenged while coming home a daylight winner.

Jenda’s Agenda, bred and co-owned by Cindy and Larry Jones and trained by Larry Jones, debuted with a 6 1/4-length romp at Fair Grounds Jan. 7. Rick Porter’s Fox Hill Farm joined the ownership group after that Rising Star performance and the bay filly came back to score a one-length victory in a one-mile-and-70-yard optional claimer in New Orleans Feb. 19. After Saturday’s win, trainer Larry Jones said his goal for the filly was the GII Black-Eyed Susan S. at Pimlico Preakness weekend with a possible prep in Laurel’s Apr. 22 Weber City Miss S.

While Larry Jones was on a sabbatical, Cindy Jones trained the couple’s Just Jenda to wins in the GIII Honeybee S. and GIII Monmouth Oaks at three and another in the GII Molly Pitcher S. back at the Jersey Shore the following season. The winner’s third dam, a half-sister to GI Blue Grass S. winner Bachelor Beau, produced the SW & GSP Tutorial (Forty Niner), herself responsible for GSW Dixie Band (Dixie Union). A bit further down the page is GII Adirondack S. winner Seeking Regina (Seeking the Gold), whose daughter Seeking the Sky (Storm Cat) won the GIII Interborough H.

Just Jenda is the dam of the 2-year-old colt Just Old School, a son of the former Jones-trained and Fox Hill-owned Old Fashioned and a yearling filly by Majesticperfection. She was most recently bred to another Airdie stallion, Creative Cause.