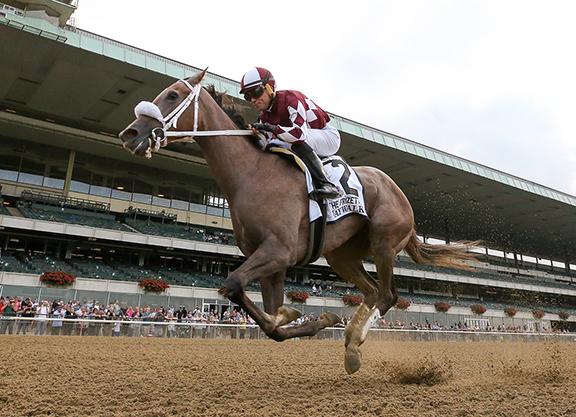 D J Stable and Cash is King's Jaywalk (Cross Traffic), the front-runner to earn an Eclipse Award as champion 2-year-old filly of 2018, is targeting the GII Davona Dale S. for her sophomore debut going one mile at Gulfstream Mar. 2.

The GI Breeders' Cup Juvenile Fillies heroine and GI Frizette S. winner returned to the worktab with a four-furlong move in :50.80 (23/38) at Palm Meadows Jan. 11.

“She went a nice, easy half. It was perfect,” trainer John Servis said. “She galloped out super, so she didn't lose much. Everything went very good.”

Servis continued, “The way she galloped out today, I'd say we're right on schedule. She acts the same and looks the same. She maybe got a little bit taller but, other than that, she hasn't changed much at all, to be honest with you. She put on a little bit of weight, which is good.”

The 48th annual Eclipse Awards ceremony will be held Jan. 24 in the Sport of Kings Theater at Gulfstream Park. Servis also trained GI Kentucky Derby and GI Preakness S. winner Smarty Jones to the Eclipse Award as champion 3-year-old of 2004.

“We're very excited about it,” Servis said. “I don't know how much else she needed to do. She won at [four] at different racetracks, all at different distances, and she won two Grade Is. She had a pretty damn good year.”