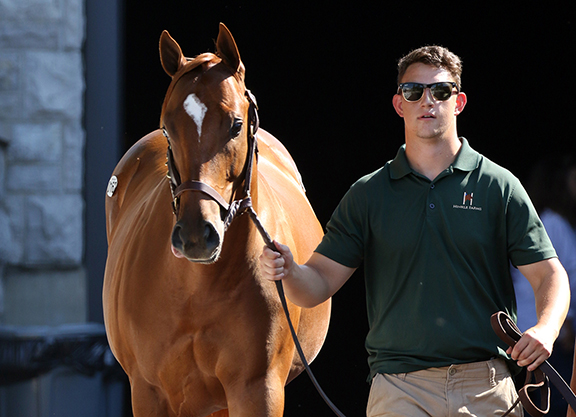 Ghazaaly as a yearling | Keeneland

This salty Pegasus World Cup day maiden special is littered with firsters with big pedigrees and big price tags, including a half-brother to undefeated Triple Crown hero Justify (Scat Daddy) named STAGE RAIDER (Pioneerof the Nile). After RNAing for $950,000 at KEESEP, the bay will carry the colors of breeder John Gunther and will be saddled by Chad Brown. In addition to Horse of the Year and champion 3-year-old male Justify, Stage Raider is also a half to the ill-fated GSW The Lieutenant (Street Sense) and their dam is GSP Stage Magic (Ghostzapper).

WS Farish snagged Marching (Liam's Map) for $285,000 at KEESEP and he debuts here for Shug McGaughey. Out of MSP War Tigress (War Chant), he is a half to GSW War Heroine (Lonhro {Aus}). TJCIS PPs

Bob Baffert sends out the latest in his line of expensive and well-bred 3-year-olds in $650,000 KEESEP buy FENWAY (Into Mischief). Owned by the partnership known as the “Avengers,” the bay boasts a typically speedy Baffert worktab, most recently going a best-of-76 five furlongs in :59 1/5 at Santa Anita Jan. 17. He hails from the family of stakes winners Key to the Cat (Tale of the Cat) and Miss Catalyst (Mr. Greeley). TJCIS PPs

Bret Calhoun sends out homebred first timer FORCE OF NATURE (Tapit) for Gary and Mary West in this event. Out of Canadian champion Milwaukee Appeal (Milwaukee Brew), she is a full-sister to MGSW Actress. Fox Hill Farm's Windmill (Street Sense) also makes her first trip to the post for trainer Larry Jones here. She is out of a full-sister to GISW Visionaire (Grand Slam); and a half-sister to GISW Tara's Tango (Unbridled's Song); GSW & MGISP Scarlet Strike (Smart Strike); and GSW Madison's Luna (Tapit). TJCIS PPs