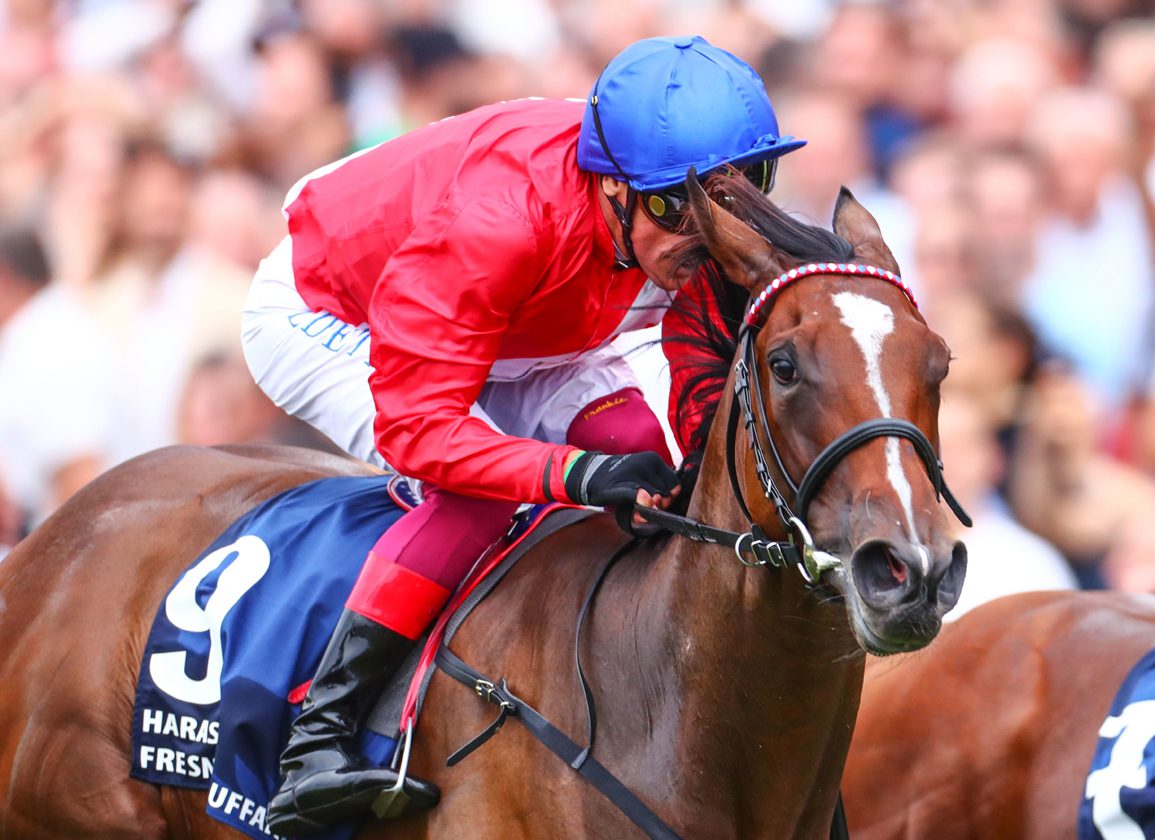 Putting her first career defeat in the G1 Falmouth S. firmly behind her on Sunday, Cheveley Park Stud's Inspiral (GB) (Frankel {GB}) took another step forward to defeat the colts and older horses in Deauville's illustrious G1 Prix du Haras de Fresnay-le-Buffard Jacques le Marois, a 'Win And You're In' for the GI Breeders' Cup Mile at Keeneland in November. Always travelling with abundant intent under Frankie Dettori as she craved action restrained a few lengths off the fierce pace duel up ahead, the G1 Coronation S. and G1 Fillies' Mile heroine worked her way to the fore with 300 metres remaining and had to give extra as the G1 Prix Jean Prat runner-up Light Infantry (Fr) (Fast Company {Ire}) emerged in the closing stages. Always a touch too strong for that rival, the 9-5 second favourite held a neck advantage at the line as the leading French hope Erevann (Fr) (Dubawi {Ire}) joined in to be the same margin away in third. The 8-5 market-leader Coroebus (Ire) (Dubawi {Ire}) made a dramatic wide move from further back, which fizzled out as he came home fifth.

“We were scratching our heads after Newmarket after an amazing performance in the Coronation, but today she was taking on Guineas winners and older horses and showed she's a true champion,” Dettori said. “We went extremely fast throughout and I hit the front plenty early, but John thinks she can get a little bit further in time so I wasn't afraid about getting to the line. She travelled great and was on it today but she's a filly that you need to know–when she wants to go, she's the kind of filly you don't want to disappoint.”

Inspiral, who had proven when ultra-impressive in the Coronation that she is the leading 3-year-old filly in Europe, was up against a notable front-runner's bias in the Falmouth where Prosperous Voyage (Ire) (Zoffany {Ire}) stole a march on her. That July 8 feature has seen many upsets down the years and the quick surface prevalent at Newmarket's July Festival meant that the Gosdens' luminary was in much deeper than her odds of 1-6 suggested. This was a return to her comfort zone, with the pace so strong up front that Prosperous Voyage was behind the aggressively-ridden trio of State Of Rest (Ire) (Starspangledbanner {Aus}), Order Of Australia (Ire) (Australia {GB}) and Bathrat Leon (Jpn) (Kizuna {Jpn}). Finishing off at 1:34.07, she is behind only the Freddy Head starlets Goldikova (Ire) (Anabaa) and Moonlight Cloud (GB) (Invincible Spirit {Ire}) in terms of winning time in the recent decades, with that duo out on their own in dipping under 1:34.

John Gosden, who was annexing a third straight win in a race he has won four times overall, was keen to revisit Inspiral's sole reversal at Newmarket. “It wasn't really that she was out of form last time–she'd had three weeks since Ascot and was in top form, but it was a small field and she didn't get any cover. She over-raced, did too much and didn't have much left at the end, which is her nature,” he explained. “There was a strong pace today and they went hard up front, so she switched off and relaxed. She probably hit the front a bit soon, to say the least, but the key with her is to get her relaxed early. She's very generous and wants to give and sometimes with that they're a little over-enthusiastic. You could go to a Matron or a Sun Chariot, but I would be inclined to freshen up for the QEII which is her main aim. I prefer to go to the Breeders' Cup with older horses, so not this year.”

David Simcock said of Light Infantry, “I'm very proud of the horse and very pleased. He had a gallop to run at today, which was good, and he's run his heart out and run a personal best. The likelihood is that he'll go straight to the Golden Eagle in Sydney now in October. That will be his last run of the year and then he'll come back.”

Not surprisingly, Coroebus ran the fastest individual furlong of the field in the second half of the race with his sectional of 10.95 coming between the three and the two-furlong pole but he had a lot of ground to make up and paid for that sharp effort late. Along with the progressive runner-up, The Aga Khan's previously unbeaten TDN Rising Star Erevann was also excelling with the promise of better to come having entered this as the least-hardened runner coming off a narrow G3 Prix Paul de Moussac win. Christophe Soumillon said of the son of Ervedya (Fr) (Siyouni {Fr}), whose 10.99 split to two out was followed by the fastest final furlong, “My horse ran a blinder. He lacked some experience, but made a move like he would win it. Had it been slightly softer, it might have been a better result but I am proud of his performance.”