Jack Whitaker Passes Away at 95 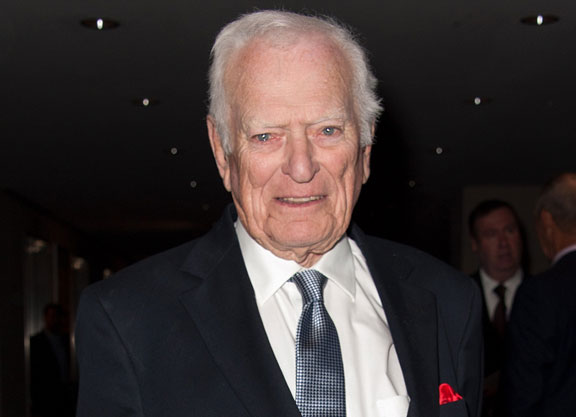 Jack Whitaker, an Emmy Award-winning broadcaster who covered many sports, horse racing among them, died on Sunday at his home in Devon, Pa. He was 95.

His death was announced by CBS Sports.

“There will never be another Jack Whitaker in sports broadcasting,” CBS Sports chairman Sean McManus said in a statement. “His amazing writing ability, on-air presence and humanity are unmatched. His unique perspective on sports ranging from horse racing to golf to NFL football was extraordinary.”

The many events he covered included the first Super Bowl, major golfing events and the Olympics, but he was also a familiar figure on network broadcasts of the Triple Crown races and was part of the on-air team that covered Secretariat’s victory in the 1973 Belmont Stakes.

After working for local stations in his native Pennsylvania, Whitaker started at CBS in 1961. In addition to Secretariat’s Belmont, he covered the ill-fated 1975 match race between Ruffian and Foolish Pleasure.

Perhaps as articulate as any broadcaster ever and known for his essays, his commentary leading up to the 1973 Belmont, as always, captured the moment perfectly.

“There may be some people who do now know what or who Secretariat is at this time…people who have been marooned on Pacific islands or lost in Amazonian jungles,” he said. “But for those of you who may have just gotten to know him in the last week or 10 days, here is a brief biographical sketch: First of all, you must know that he is quite the handsomest of horses to come along in decades. Secondly, he was voted Horse of the Year as a 2 year-old, an unprecedented event, unheard of since that award always goes to older horses. If that wasn’t enough to distinguish him from his peers, Secretariat was syndicated for $6,080,000 before he raced as a 3 year-old. Not only was that unheard of before, it had scarcely been dreamt.”

Commenting on the 1973 Belmont and as to where it stood among his favorite sporting events, he told turf writer Jay Hovdey: “There were so many great moments. But just to have been part of that 1973 Belmont was worth a whole career.”

When Ruffian broke down in the match race, he said: “A false step here and the years of planning and breeding and training and loving came to an end. A horse with the speed and stamina and heart … a horse, like the Bible says, ‘whose neck is clothed in thunder.'”

Whitaker joined ABC in 1982 at a time when that network covered the bulk of the sport’s most important races.

“He was a very funny, charming man,” said Dave Johnson, who worked with Whitaker on the ABC broadcasts. “When we were working with ABC, I remember going to the Wishing Well with him in Saratoga for dinner along with Jim McKay and a couple of other people from the ABC crew and he was just so entertaining. He was an incredible person. What a nice man. What a good human he was. I never heard anyone say a bad word about him.”

What impressed Johnson most about Whitaker’s on-air talents were his eloquence and his ability to throw his essays together within a matter of just a few minutes.

“He was a brilliant writer. His essays were fantastic,” Johnson said. “It was his job to set the scene. He did two essays. One was at the beginning of the show as to what the race was in context to the sport and the human stories. And then he did one at the end, a wrap-up. He must have prepared a lot of different things for the end of the show because he would always include what happened in the race. He would always know just not who won the race but why, and he didn’t have more than a few minutes before he had to go on. He was just a great writer and I know he loved the sport.”

Whitaker won an Eclipse Award for National Television Achievement in 1977, and was presented in 2013 with the Jim McKay Award for excellence in racing broadcasting by the National Turf Writers and Broadcasters Association.

Whitaker was born May 18, 1924 and, according to The New York Times, became interested in college sports as a teenager when attending Penn football games at Franklin Field. After he graduated from St. Joseph’s University, he was hired by a small radio station in Pottsville, Pennsylvania. His first high-profile job came in 1950 with WCAU, a television station in Philadelphia.

He was also a decorated veteran of World War II, fighting in the Normandy Campaign, and was wounded by an artillery strike.