Jack Preston Passes Away at 84 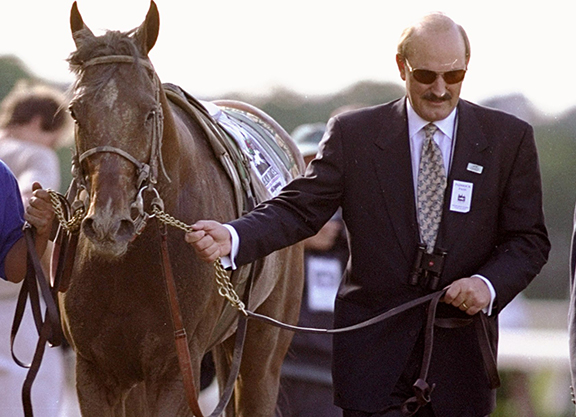 Longtime owner/breeder Jack Preston died in his home in Texas earlier this month, the Blood-Horse reported Friday evening. He was 84.

Along with his brothers, he founded Preston Farm near Quanah, TX, then eventually developed Prestonwood Farm near Lexington, where they stood top sire Kris S. and Groovy. Distorted Humor, a horse campaigned in partnership with Russell Reineman to four graded stakes victories, launched his stallion career at Prestonwood, as did Victory Gallop, who famously dashed Real Quiet's Triple Crown aspirations in 1998.

In 2000, Kenny Troutt and Bill Casner teamed to purchase Prestonwood from the brothers and renamed it WinStar Farm. The nursery remains home to Distorted Humor, now 27 years old.

“Jack was a great guy that just was always very positive and a real gentlemen and sportsman,” WinStar's Elliott Walden, who trained Victory Gallop for the Prestons, said. “That was the great thing about the Preston brothers; they were true sportsmen and loved the competition of horse racing. And Jack was always very friendly. He enjoyed the people part of the horse business as well, and was a great man.”

Walden continued, “I was talking to Melissa, his wife, a couple of days ago and she said the (1998) Belmont was the greatest day of his life. It was one of the greatest days of my life, too, to be a part of that and to just be able to share that with Jack was really neat. I can just remember both Art, who passed away a few years ago, and Jack and their willingness to take on Real Quiet, even though we had been defeated by him twice. They wanted to come back again, and that just doesn't happen any more. Really, they wanted to come back for the competition of it. It was a rivalry and I personally had gotten weak. And they encouraged me to run because of the sportsmanship. They couldn't let Real Quiet just have the Triple Crown. It meant something. It meant something to them, and they wanted to beat Real Quiet. I remember that.”

Rich Decker, General Manager of Prestonwood Farm starting in 1985, stayed on board until they sold the farm to WinStar.

“Jack was an equal partner in Prestonwood and was very active in decision making with the purchases we had of mares, stallions and racehorses,” Decker said. “He was a very thoughtful guy, put a lot thought into any of the decisions that he made and was a very wise man that obviously helped with the success of Prestonwood.”

He continued, “They were all very competitive. Jack was a baseball pitcher in college at the University of Tulsa. He was a competitive guy, man. As they all were. Quiet in demeanor, but very competitive. It's just sad to see the end of the three brothers' involvement in the horse business. They're a group of guys who are part of a bygone era now. There's always somebody to take their place, but it's just different now. It's different. ”

Michael Dickinson was a longtime trainer for the Preston family, led by the heroics of Da Hoss.

“It's the end of a racing family,” Dickinson said. “All three brothers loved the thrill of the game. They were brilliant owners and great friends who loved to be involved. We used to communicate on a daily basis, and they were always up for a challenge. Jack once told us they weren't afraid of risk as they had drilled plenty of dry wells in the oil fields before they hit payday.”

Dickinson said that they proved just how risk-averse they were before Da Hoss's run in the 1996 Breeders' Cup Mile at Woodbine.

“The horse liked firm going and it had rained almost every day for 10 days at Woodbine, so we thought, `we're in trouble,'” Dickinson said. “But then Jon Boy, the exercise rider, Joan Wakefield and myself walked the course on Wednesday, Thursday and Friday. We thought we found one dry-ish path and hatched a plan which was unconventional to say the least. So we spoke to the boys the night before the race and said, `this is going to be very difficult. If we ride a normal race, we will not win.' So we came up with a plan. I ran it past the owners and right away they said, `do it.' So we went to Gary Stevens the next day with the plan. We said to Gary, this is unusual, but we got the owners' permission and if it doesn't work, we will take the blame.”

Da Hoss's Breeders' Cup win two years later at Churchill, with only one prep race since the win at Woodbine, was just as unconventional, but the Prestons were just as willing to go along with the plan.

“He hadn't run for 18 months and he was getting ready to run in June, and he had a problem, so I phoned them up and said, `sorry boys,” Dickinson said. “I know you haven't seen this boy in 18 months but he needs more time. But we'll get him to the Breeders' Cup, and they never questioned it at all. That was the happiest day of my life, I think, when he won the second one. They were true sportsmen. They always wanted the best for the horse, and the horse always delivered for them.”