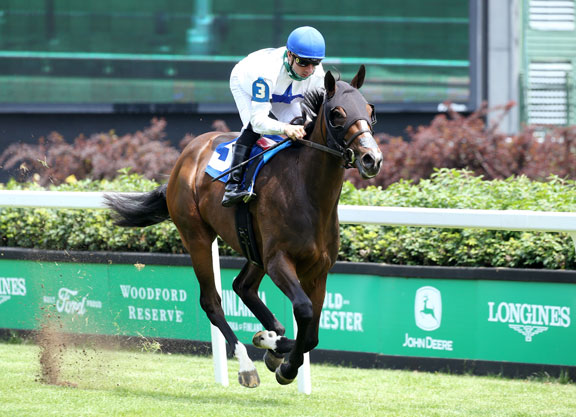 Tobys Heart (Jack Milton), broke last, made a sustained move from the rear of the field, steadied on the turn and ran greenly in the stretch, yet still romped by a distance to become the latest 'TDN Rising Star' Thursday at Churchill.

Showing an upbeat worktab for trainer Brian Lynch highlighted by a half-mile breeze over the local main track in :47 1/5 (5/84) May 23, the $45,000 OBS March buy was supported at the windows throughout and ended up as a close 17-5 third choice behind firsters from the Mark Casse and Wesley Ward barns. Off at the tail of the nine-horse group, the dark bay quickly made up ground and had moved up into fifth with barely a furlong run.

Continuing to advance powerfully around the turn, she almost ran up on the heels of pacesetting favorite Road to Romance (Quality Road) a few strides before turning for home, but managed to avoid getting stopped and took charge in the two path at the top of the lane. Quickly moving clear under confident handling from Adam Beschizza, she slammed the door before the furlong grounds and cruised home 6 3/4 lengths to the good jumping back to her left lead. Longshot Ever Clever Lady (Vancouver {Aus}) won a photo with Little Jewel (Liam's Map) for the place, while Road to Romance faded to be fourth.

Tobys Heart is the first 'Rising Star' for Crestwood Farm's second-crop stallion Jack Milton, a graded stakes winner at three, four and five years old for Todd Peltcher who reached his career zenith with a score in the GI Maker's 46 Mile S. in 2015. She is the fourth foal to race out of stakes winner Pick of the Pack (Lil's Lad), a half-sister to GSW turf sprinter Great Attack (Greatness) out of GSW juvenile Cat Attack (Storm Cat). She produced a Commissioner colt last season and a filly by the same sire Apr. 15.