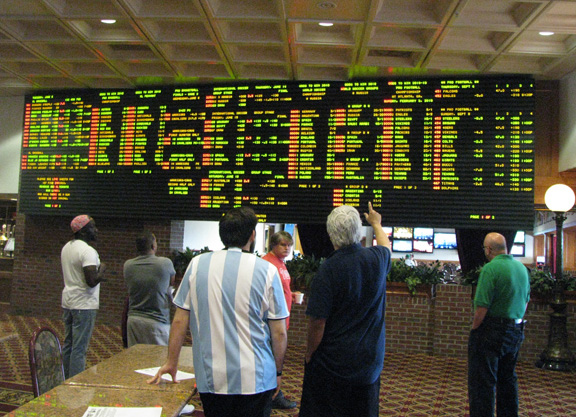 STANTON, DE–A fellow by the name of Tom Barton made his way to the front of the line at the windows in the simulcasting area at Delaware Park, peeled off ten $100 bills and told the teller to bet the money on the Yankees to win the World Series at odds of 5-1. By doing so, he made gambling history, placing the first significant legal U.S. sports wager outside of Nevada.

The day has finally come.

Very limited forms of bets had been allowed in three states besides Nevada–Delaware among them–but full-scale sports betting outside the Silver State had not been permitted in the U.S. until the Supreme Court of the United States struck down The Professional and Amateur Sports Protection Act of 1992 in May. Monmouth Park, which was a leading figure in fighting PASPA, was expected to be the first facility to offer sports bet, but fell behind Delaware while New Jersey state politicians ironed out some final regulations. Monmouth is hopeful it can begin taking sports bets Friday.

Delaware's two harness tracks, Dover Downs and Harrington Raceway, also opened up their sports books yesterday. All three opened simultaneously at 1:30 p.m. For sports betting, they will normally be open from 11 a.m. to 11 p.m.

While one day of sports betting in one tiny state won't provide much, if anything, in the way of how the new legal form of betting will affect horse racing, industry leaders will be watching carefully, not knowing what to expect. Because Monmouth Park is leased by the New Jersey Thoroughbred Horsemen's Association, profits from sports bets will definitely be used to help racing and, in particular, purses.

Delaware is also unique. Prior to the Supreme Court ruling, it was allowed to take parlay-style wagers on games and the local horsemen's group negotiated a 9.6% cut of the profits from those bets. It will get the same from all the new forms of sports betting. In virtually all other states where there is racing, there are no provisions in sports betting legislation that call for money to go to the sport. The fear is that sports betting could prove to be so popular that it will have a negative impact on wagering on racing and that tracks and casinos that get sports books will not funnel any of the money to the sport.

When asked if he thought sports betting would improve the quality of racing at Delaware, which has struggled in recent years due to increased casino competition in neighboring states, track president Bill Fasy said: “I'm hoping it's not a detractor. You have your money in your pocket, you're a horse bettor and you see the Eagles are playing this weekend and you're also a fan of the Eagles. You might want to wager on the Eagles instead of the horses.”

Leslie Poland, a spokesperson for the Delaware Lottery, which operates the sports betting in the state said it was premature to make any projections so far how much would be handled in Delaware on an annual basis.

Because baseball was the lone U.S. sport being played Tuesday, it was an otherwise quiet day for sports betting. But as 1:30 p.m. approached, there was a noticeable energy in the building and people began to line up to wager and be able to say they were there when sports betting finally escaped outside of Nevada.

“Everyone has been waiting for this,” said Barton, a self-described professional gambler. “It feels like we just got released. You used to be able to bet on lotto, but not sports betting? Come on, how ridiculous is that? And now we finally can do it. To be able to do what we love, have some fun with it and, like me, make a living at it and not have to travel to Vegas all the time anymore, that is great.”

Barton was followed closely in line by Vince Kordic of Hagertsown, Maryland. He said he made a total of $150 in bets on soccer's World Cup.

“I came specifically for the moment,” he said. “I looked to find what odds [offered] were better than other places I wager with. With the World Cup, that was the case on some of the longer-priced teams. I'll be here Thursday for day baseball and will probably come once or twice a week, more during football season. I'll still bet online offshore, but this gives me a chance to shop for odds.”

Kordic said he had a passing interest in racing and speculated that he may make a few horse bets on trips to Delaware Park.

Robert Williams of Harrisburg, Pennsylvania, wagered $1,100 to win $1,000 on the Golden State Warriors to cover tomorrow night's NBA championship round game against the Cleveland Cavaliers. The Warriors are 4.5-point favorites. He said has also has an offshore betting account.

Like Kordic, he said he would be making return trips to Delaware Park, but would not be playing the horses.

“No horses,” he said “I don't know anything about it at all. I have bet on horses before but its not my forte. In Vegas, I'd bet on horses occasionally, but that was only because they used to have rules where you got free drinks if you bet on horses but not on sports. It's money and I take this seriously. I only bet on what I am knowledgeable about.”

While bricks and mortar facilities like Delaware Park will be the first out of the gate with sports betting, the future is, no doubt, on line. Fasy said Delaware Park should be able to accept on-line sports bets from Delaware residents by the fall.