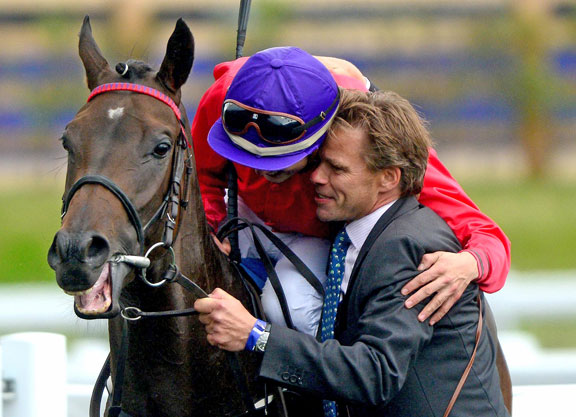 Success can be measured in numerous ways, though longevity must be considered a great yardstick no matter the field in which someone excels. Airlie Stud has been a leader of the bloodstock industry since it was established in the 1960s by the late Captain Tim Rogers, under whose management it became a stallion farm of great proportions.

His wife Sonia took the reins upon his passing in 1984 and after deciding to focus completely on a quality broodmare band, has developed the next phase of the Airlie legacy alongside her son Anthony.

One of the most recent chapters in Airlie's success story is Skitter Scatter (Scat Daddy), the champion 2-year-old filly of 2018 on the merit of a victory in the G1 Moyglare Stud S. Trained by Patrick Prendergast for Anthony and Sonia, she was bred by the Rogers' in conjunction with longstanding partners Three Chimneys Farm. Skitter Scatter this year joins the Co. Kildare nursery's enviable broodmare band.

“The dream is to own and breed a Group 1 winner and Skitter Scatter provided that for the farm in 2018,” Anthony Rogers said. “She will visit Frankel in 2020.”

Skitter Scatter is out of a half-sister to Intense Focus, who was bred by the same partnership, and the family's story is far from over.

“Her brother Moore Street Wise is with Paddy Twomey,” Rogers said. “Both the trainer and Billy Lee are pleased with him and all being well he should be out early.”

Moore Street Wise's homework has earned him a Guineas entry, while Skitter Scatter's exploits earned her dam, Dane Street (Street Cry {Ire}), a visit to Dubawi (Ire). That mating produced a colt on Feb. 17 and is to be followed with a trip to Kingman (GB) at Juddmonte Farms.

Another homebred joining Skitter Scatter in Airlie's paddocks is Magnolia Springs (Ire) (Shamardal), a stakes winner who is set to visit Sea The Stars (Ire) in 2020.

“A listed winner by Shamardal from an excellent Ballymacoll family is exciting,” Rogers said. “We also have her 3-year-old sister called Vivandiere (Ire) (War Command) in training with Sheila Lavery.”

Rainbow City (Ire), the dam of Magnolia Springs, reads as an absolute bargain buy at 60,000gns, the daughter of top broodmare sire Rainbow Quest being a full-sister to G2 Geoffrey Freer S. winner Multicoloured (Ire) and a half to the top-class Gamut (Ire) (Spectrum {Ire}).

On the subject of shrewd investments, Rogers nominated another broodmare. “Marsh Daisy (GB) (Pivotal {GB}) was a great buy by my mother and uncle for £80,000 in 2012,” he said. “She was a listed winner by Pivotal from an excellent Meon Valley family.”

The aforementioned price was paid as a yearling and her two black-type successes came over 10 furlongs in the colours of Sir Thomas Pilkington. She has gone on to produce yearlings worth 435,000gns and 260,000gns, the former paid for Light Blush (Ire) (Kodiac {GB}), who finished a close second in the Listed Star S. last summer and was beaten three-quarters of a length when third in last Thursday's Listed Meydan Classic. With an Acclamation (GB) 2-year-old and Australia (GB) yearling, both fillies, Marsh Daisy visits Invincible Spirit (Ire) this season.

“It was great for the first foal of a mare to get black-type, however Nurse Barbara was only beaten by a pixel in the Ballylinch Ingabelle S.,” Rogers said. “I am sure Ger Lyons and the owners will have fun with her in 2020.”

Airlie plans to support Invincible Spirit's first-season sire son Magna Grecia (Ire) with Stupendous Miss (Dynaformer), already responsible for three stakes horses and currently due to Expert Eye (GB). It is a family the Rogers' have been involved with for some time.

“It was a family that we owned with Robert Clay in the 80s and 90s with Stormette (Assert {Ire}),” Rogers said. “We bought back into it a few years ago, buying Stupendous Miss at Keeneland. Her 4-year-old Moll Davis (Ire) (Kingman {GB}) is with George Scott. We got a bit of black-type with her last year and will be trying to get some more in 2020.”

Blue Point (Ire) is another new sire to whom Airlie are sending a mare, specifically Kate The Great (GB) (Xaar {GB}).

“Kate The Great was bought as a foal and comes from the family of Deep Impact (Jpn) a couple of generations back,” Rogers explained. “She won a little race at two but her progeny have done very well on the track with three rated over 100 and her first foal Eastern Impact (Ire) (Bahamian Bounty {GB}) rated 116.” Due to foal to Sea The Stars (Ire), Kate The Great has a yearling colt by Invincible Spirit.

Fair Sailing (Ire) is a daughter of top-class miler Docksider, whom Airlie bred and themselves stood in his early stallion career. Fair Sailing has produced two group performers, is currently in foal to Tamayuz (GB) and will visit Starspangledbanner (Aus) in 2020.

Starspangledbanner commands €22,500 at Coolmore's Castlehyde Stud, as does Zoffany (Ire), who sired his second Group 1 winner last season in the shape of Albigna (Ire). Airlie has enjoyed success in the past with Zoffany and will send him Marie Celeste (Ire) (Galileo {Ire}) this season.

“Marie Celeste is producing some nice-looking stock,” Rogers said. “Her Zoffany yearling was one of our nicest yearlings last year, bought by Rabbah for £85,000.

“Sadly Marie Celeste's dam Kincob (Kingmambo) died having Ursa Minor (Ire) (Sea The Stars {Ire}), who looks a promising 3-year-old in training with John Gosden and has a Derby entry. The stud also has a sister to Marie Celeste called Dupioni (Ire) (Siyouni {Fr}) in training with Paddy Gallagher in California.”

Airlie are repeating a tried and tested formula with another Castlehyde resident, Holy Roman Emperor (Ire), whose Airlie-bred daughter Valeria Messalina (Ire) won on debut in September before finishing a close second in the G3 Oh So Sharp S. at Newbury.

“Valeria Messalina came back to Airlie for a little break and returned to [trainer Jessica] Harrington at the beginning of the year,” Rogers said. “She reports that she is very happy and is enjoying her work.”

Her dam Arty Crafty (Arch) previously produced Group 3 scorer Pincheck (Ire) (Invincible Spirit {Ire}) and is currently in foal to Kodiac (GB) and will visit Holy Roman Emperor again this season. The family's exploits are not limited to one mare, though.

“We bought back Valeria Messalina's sister Enraptured (Ire) (Oasis Dream {GB}) a couple of years ago and her first foal by Siyouni recently won in France.”

Airlie's exploits have often taken it far and wide, and at one time the Rogers' owned farms in the U.S. and New Zealand as well as Ireland. Though their international operation is now limited to partnerships with the Clay family in the U.S., their graduates continue to fly the flag further afield.

“Airlie has produced good winners in the U.S. and Japan already in 2020,” Rogers said. “We also were very close to breeding a group race double on Derby day at Flemington last year with Fifty Stars (Ire) and Downdraft (Ire).”

Downdraft is himself an excellent example of his breeders' reach, with the Flemington Group 3 winner having earlier achieved stakes success at the less exotic tracks of Down Royal and Roscommon. He is one of three black-type horses out of Cinnamon Rose (Trempolino), special to Rogers as the first winner in his colours though better known to most as the granddam of dual Group 1 winner Kew Gardens (Ire) (Galileo {Ire}).

The Rogers family has been known to source broodmares from Australia, one example being Chiarezza (Aus) (Fantastic Light), while Group 1 Kournikova (SAf) (Sportsworld) travelled from South Africa to produce three black-type winners at the Co. Kildare farm.

“We are constantly on the lookout for certain families and this often takes us far afield, sometimes with success, and other times without,” Rogers said. “We have waited up to 20 years to obtain members of such families to add to our broodmare book.”

Many mare owners continue to cite plights of overproduction in the market and rising stallion fees. Rogers admitted times have changed when it comes to setting fees.

“Once upon a time the rule of thumb was that a breeder would expect a three-fold return on the covering fee,” Rogers said. “Now the statistics seem to tell one that it is about one and a half times, if one is lucky.”

The talk of overproduction and rising stallion books, however, is nothing new, Rogers said. “This topic has been kicked for as long as I can remember,” he noted. “Stallion masters ultimately have the control, though they seek to lay the responsibility at the feet of the mare owner. Most initiatives to explore and agree some control on overproduction have run into the sand. There is, to my knowledge, only one stud which stands stallions both in Ireland and the U.K. whose policy it is to limit the number of mares covered and this policy is strictly adhered to.”

Despite what may happen in the ring, the Airlie motto has never changed. “Our main aim is to breed a racehorse,” Rogers said. “The sales have become increasingly fickle. Yearlings, due to overproduction, have to jump through so many hoops regarding conformation and vetting. Consequently, one needs to have a Plan B before the horse goes through the ring.”

This has stood to Airlie in the long run–Skitter Scatter missed her intended date at the yearling sales and rewarded Airlie on the track. Twenty years ago, the farm parted with 100,000gns for a filly foal by Darshaan (GB), only for her to go unsold the following year at 120,000gns. She placed on all three of her juvenile starts in Sonia Rogers's silks and went on to win the G3 Park Hill S. by seven lengths at three. Named Discreet Brief (Ire), she added to her value by producing a pair of top 2-year-olds for Airlie Stud. In horse racing, as with everything, the cream always rises to the top.