It's All Gio Ponti's Drefong in the Forego 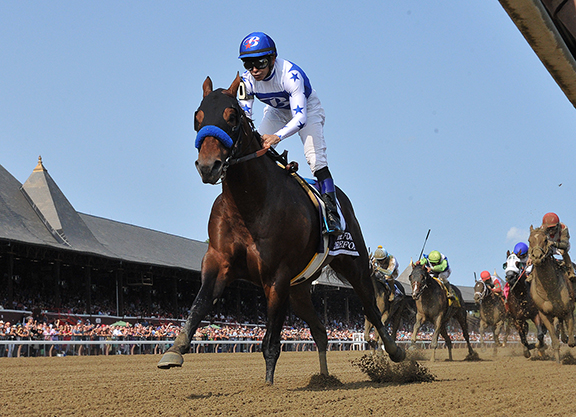 Sent right to the front by the aforementioned Hall of Famer from post 10 here, he showed the way through fractions of :22.89 and :45.58. Drefong let it out a notch as they began to straighten for home, and it was all over from there as he increased his advantage to the wire en route to another sharp victory.

“We just saw the real Drefong,” winning trainer Bob Baffert said by phone from Del Mar. “You would have seen him last time if Mike Smith hadn't fallen off. It's a good thing that everything turned out alright because otherwise, I would have never brought him to the Forego. I was going to run him once there [at Del Mar and then bring him into the GI Breeders' Cup Sprint at Del Mar], or maybe twice [in California]. I'd rather win the Forego than that other race. He's a great horse and he's always been a champion.”

Baffert continued, “We knew he was our best chance [of his three Travers Day runners] going in there. When he hit that third gear there, I was really happy, and happy to hear the cheers. I'll probably get him home and maybe run him at Santa Anita. We'll bring him back home and play it by ear.”

Eltimaas, with Drefong in utero, RNA'd for $65,000 at the 2012 Keeneland November sale. Breeder Fred Allor purchased the mare, in foal to Lookin at Lucky, for $90,000 at the 2011 Keeneland November sale. She sold to Machmer Hall in foal to Mizzen Mast for $77,000 at that auction in 2013. The mare's 2015 filly by Animal Kingdom sold to Juddmonte Farms for $400,000 at last year's Keeneland September sale. She had a filly by Candy Ride (Arg) earlier this year and was bred back to Into Mischief.

A daughter of multiple graded stakes placed Najecam (Trempolino), Eltimaas is a half-sister to champion 2-year-old and GI Breeders' Cup Juvenile winner Action this Day (Kris S.). The unraced mare was bred by Jaime Carrion, who also bred Action this Day, as well as champion Meadow Star and Grade I

winners Cutlass Reality and Meadowlake. Carrion dispersed his bloodstock in 2008. Eltimaas was purchased by Shadwell for $600,000 as a Keeneland September yearling in 2008. She brought 20,000gns as a 3-year-old at Tattersalls December in 2010.

Drefong is from the first crop of Castleton Lyons's three-time Eclipse champion Gio Ponti (Tale of the Cat).