Home » Archive » Shared News » It's All about Sole

It's All about Sole 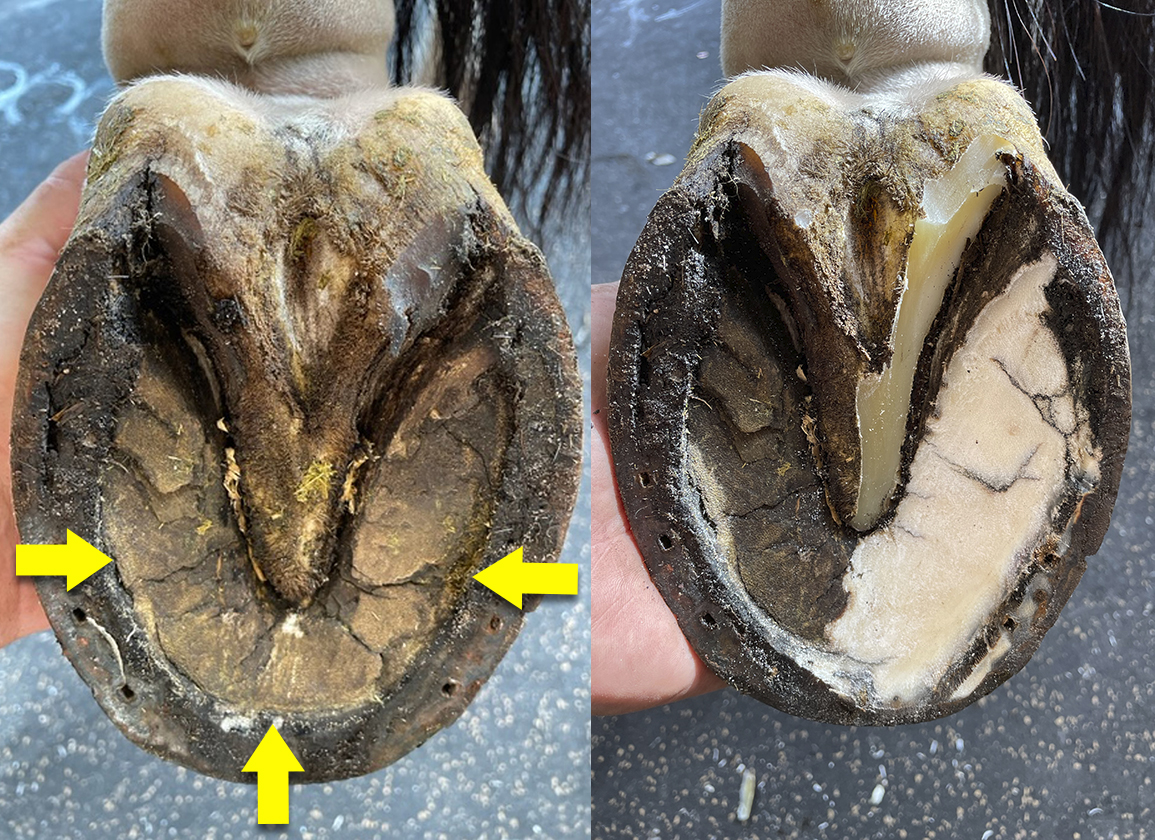 “It's all about soul…Yes, it is.” The title and line from Billy Joel's 1993 hit refers to unmeasured essence of our being, and the same may be said also about another kind of sole, the hoof's sole, which is an often-overlooked, under-studied insensitive structure of the hoof that fails to get much attention until there is a problem. The failure to care for the sole's well-being, like its homophone cousin (soul), may have deeper implications and longer-lasting consequences for the soundness of the horse that it is attached to.

The sole is a keratinized structure similar to the wall, growing at the same rate as the horn and designed to resist wear with a primary function of protecting the bottom of the coffin bone. The sole's flexibility and thickness vary, often effected by environmental conditions (wet or dry), hoof morphology, pathology, and a host of other factors (breed, size, stabling, turnout, etc.), all which may affect its makeup. The sole's design is to flake away or exfoliate over time, however, flaking or exfoliation is again dependent upon a number of factors including those previously listed, all affecting its composition. Horses can have thick, thin, or false soles. The ability to identify the type of sole, and how much can be removed, requires experience.

To properly 'read' a foot for trimming, balancing, or shoeing, farriers with their hoof knife in hand remove varying amounts of sole and the practice differs within the industry. The amount of sole and from where it is pared is an often-argued conversation amongst farriers, old and new, in journals and trade publications. Everyone has a theory and everyone has an opinion.

Is there a point where sole paring goes too far?

Many years ago, in seemingly another lifetime, I had the good fortune to meet and apprentice for the late James Cahill of Lamberville, N.J. Cahill, a Vietnam veteran returned from his service, trained Thoroughbreds for his then-father-in-law in the New England area. Cahill recounted to me how he was fascinated by shoeing and somehow the need arose for him to learn how to shoe, most likely a need to tack a shoe [this story is sounding familiar to me, as I had a similar experience]. He would always laughingly describe how he remembered paying his plater to teach him and at some point, later while still in the midst of learning, recognized that he was still paying his plater to watch him while he shod his own horses. Cahill later transitioned from training to shoeing full time which segued to shoeing riding horses.

The horseman's style was to repeatedly pare the sole; his knife was always unbelievably sharp. I recall him pressing with his thumb, paring, and pressing again while sometimes going a little too far and finding what farriers refer to as 'bottom'–or even farther with the infrequent droplet of blood. Obviously, being a good apprentice and direction follower, I copied my teacher with his sole paring style. I later learned when I went on to work for legendary USET and Hall of Fame farrier Seamus Brady that this practice of sole paring was not going to fly with him. I recall on my first day when I started paring out the sole of the horse that I was working on, Brady apoplectic, bellowing in his Irish accent, “Whoa, whoa, whoa, what the hell are you doing? We don't do that in this world.” He later explained after I was stopped in my frenzied sole-removing tracks, that the horse needs as much protection as it can get and removing the sole was essentially removing protection, an argument supported by Dr. Scott Morrison, partner and founder of the Podiatry Center at Rood & Riddle Equine Hospital in Lexington. 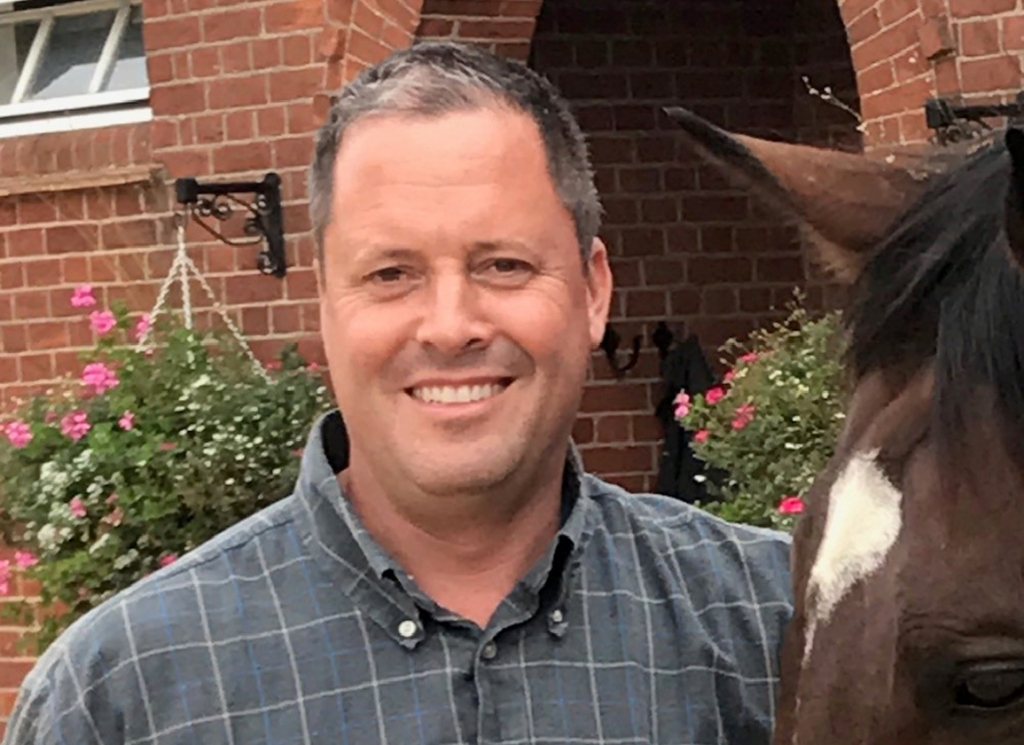 I was grateful to catch a moment with Morrison in between his in-demand, reported seven-day-a-week schedule as he agreed to share his thoughts on this topic. As with all things sole (soul) related, the conversation pivoted and delved deeper into some issues the industry continues to face.

Having had some overlap with Morrison over the years, I recently worked closely with him on a new account that I was enlisted to take over and he was recruited by the owner to consult. Humble is an understatement describing Morrison. In an industry where ego and chest beating are the drivers, humility and a willingness to share knowledge is refreshing. Brady exhibited similar traits. Morrison's demeanor, approach, and professionalism is almost surprising considering his influence in the industry, following other veterinary podiatrists, who Morrison labels 'pioneers,' like Dr.'s Ric Redden and Steve O'Grady.

When asked specifically about the sole and the varying farrier practices in the amount of sole that is pared out, Morrison shared that he, as well as other members of Rood & Riddle's practice, “leave as much sole as they can.”

“It still is commonly done, perhaps a little too much,” Morrison added in reference to the common practice of paring significant amounts of sole at the track. I was always under the impression that what may be considered extreme paring was an effort to create a 'cup' for traction, or to achieve the 'shortest' foot possible to relieve sole pressure under the shoe. However, Morrison thinks there may be other simpler motivations at work.

“People [farriers] like seeing a nice, cleanly pared-out foot. It looks nice. However, carving out the sole propagates flares, thinner soles, and this compromises the foot. The sole holds the foot together and a natural arch exists, a natural cup. The arch is really strong, we see it in design and architecture. [Farriers] continually weaken that dome causing the soles to collapse by removing some thickness, which changes the contours of the foot, creates flares, and the common issue: flat feet, where the arch is lost at the back half of the foot. The sole and lack of it in the back half of the foot is a very common complaint.” 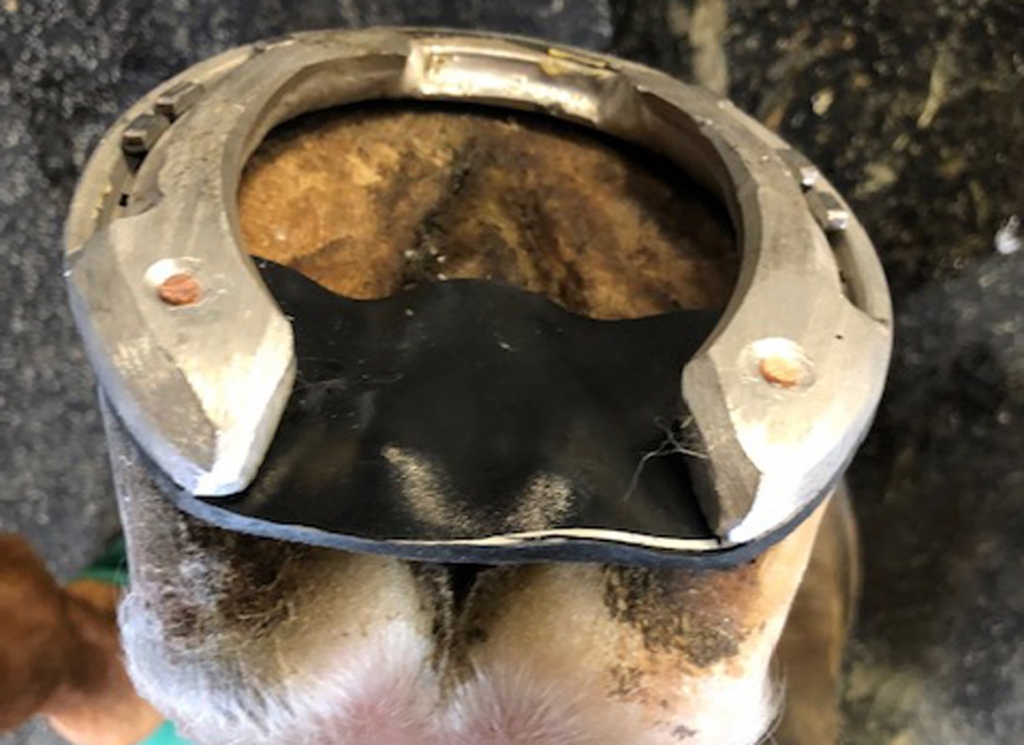 Morrison underscored that much of his time is spent restoring that natural arch and trying 'fix' its collapse by “leaving in the bars” [in certain instances dependent upon the foot] and as much sole as possible. He shoes with as much support as necessary, always trying to “mimic the barefoot condition” with the use of heartbar shoe, pads, and frog support while recognizing the realities of the horse's tolerances relating to frog and sole pressure. He also stressed there is a right and wrong way to apply these interventions as “not all bar shoes are equal.” However, Morrison highlighting some of the issues may lie with trainers and their tendency to want to see a 'normal' shoe even when “heels are crushed and the frog is dropping out of the bottom.” Morrison labeled it at times as a “battle” to get frog support or in other instances when a farrier must “do what is needed for the horse.”

Asked if this resistance by some trainers to see a properly applied shoe with frog and/or heel support may be the result of a perceived negative effect on performance he said, “I don't think so. You can train him in a bar shoe, or heartbar, and pull it off for race day,” when opting for regular shoes.

While not entirely buying into the argument that breeding may perpetuate some of these foot issues in Thoroughbreds, he did not completely discount breeding's role, however, he admitted that he has witnessed things turn around in horses where the feet “became pretty good.”

Effectively, the greater issues that Morrison highlights are the realities of continuous training.

“There is no time off,” he said. “Pulling shoes is so important because feet need to be let down. The result, to some degree [the feet] will normalize.”

It's All About Sole…and Then Some…

So where is the industry going? Where should it go? Will things ever become standardized?

Morrison, who was likely driving to his next appointment while facing the barrage of questions that I lobbed at him like hand grenades, chuckled a few times at some of my more loaded questions. I knew the answers would be good.

“There are different camps of thought [relating to industry practices]. I don't really see things changing in the near future,” he admitted.

Firmly believing that the current reality perpetuates good farriers continuing to acquire top clients, Morrison explained that their good methods will most likely be passed along to future apprentices and helpers, as has always been the tradition.

“Some disciplines may trend to doing things more uniformly,” he said.

Morrison segued into some failures on the part of the Thoroughbred industry to promote continuing education for farriers at racetracks which he labels a “big need.” He highlighted farriers in other disciplines [riding horses] tending to actively read trade magazines and attend conferences, while “platers are less represented.”

He added, “It would be nice to see a big shoe company or big owner” sponsor and promote some continuing education programs for farriers at the racetracks.

Jude Florio, who has served as a professional farrier for over 20 years, earned a graduate diploma from the University of London's Royal Veterinary College in Applied Equine Locomotor Research. He is among the current MSc Equine Science cohorts studying at the University of Edinburgh, Royal 'Dick' School of Veterinary Studies (June 2023).