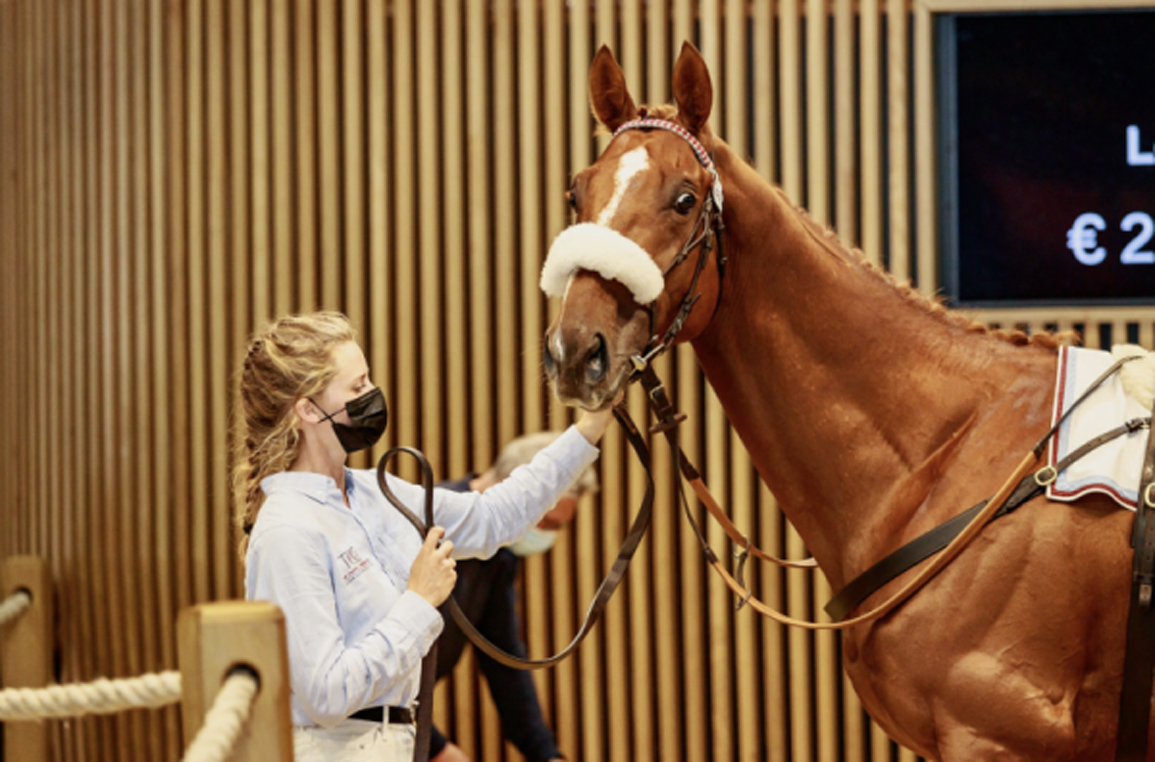 After one start for local trainer Raffaele Biondi that resulted in a runner-up effort in the May 23 G2 Derby Italiano, Juan De Montalban (Ire) (Lope De Vega {Ire}) is headed back to Britain and to the yard of trainer David O'Meara after O'Meara and his assistant Jason Kelly went a sale-topping €400,000 for the 3-year-old at Arqana's Summer Sale on Thursday. Juan De Montalban (lot 488) had been bought by trainer Andrew Balding for 85,000gns as a Tattersalls October Book 1 yearling, and sold privately to Italy after posting back-to-back wins for Mick and Janice Mariscotti.

“We've bought him for Sheikh Abdullah Almalek Alsabah, who is a longstanding client,” said O'Meara. “He's a lovely looking horse. I think he still has a lot of room to improve and hasn't yet shown us everything he is capable of.”

Juan De Montalban was offered by The Channel Consignment

The second session of the Summer Sale included breeding stock and horses in training, but was dominated by the horses in training and The Channel Consignment likewise sold the winning 3-year-old Parmenion (GB) (Soldier Hollow {GB}) (lot 490) to Pierre Boulard, Harold Kirk and Willie Mullins for €230,000. Parmenion is a full-brother to the G3 Prix de Royaumont victress Pelligrina (GB), and their second dam is the recently deceased G1 Prix Vermeille scorer and influential broodmare Pearly Shells.

“He'll join Willie Mullins,” said Boulard. “We're very happy. There's nothing not to like about him, he's a lovely horse that won his debut really well.”

Another headed to Ireland is the Wertheimer et Frere-bred 3-year-old Zileo (GB) (Galileo {Ire}), who won over 2650 metres at Chateaubriant on Apr. 26 and was fourth in the recent Listed Derby du Languedoc. He is headed to Irish trainer Michael Halford after being bought by BBA Ireland's Michael Donohoe for €150,000.

“He'll go to Ireland to be trained by Michael Halford,” Donohoe said. “He'll be gelded and we'll give him a bit of time. His new owner wishes to run in Dubai, so that'll be his objective next year.”

Saiga (Ire) (Teofilo {Ire}) (lot 356B) likewise heads to Ireland after her sale, but she has a different objective, purchased as she was as a broodmare in foal to Le Havre (Ire) by Horse France on behalf of Castlehyde Farm for €190,000. The 4-year-old carries her first foal and boasted plenty of appeal as a winning and stakes-placed daughter of the G1 Cheveley Park S. winner Vorda (Fr) (Orpen).

“We've bought her to develop the broodmare band at Castlehyde,” said Horse France's Robert Nataf. “She corresponds exactly to what we are looking for-a very good pedigree and she is in foal to Le Havre.”

Another mare in foal to Le Havre to find favour on Thursday was Nette Rousse (Ger) (Mastercraftsman {Ire}) (lot 338), a winning half-sister to Hong Kong Group 1 winner Pakistan Star (Ger) (Shamardal) who was bought by Badgers Bloodstock for €110,000. The 5-year-old will foal out in England and be covered by a leading European sire next year before being exported to Australia.

The Aga Khan's Caliyoun (Fr) (Maxios {GB}) (lot 474) had played his part to boost his profile since the catalogue was published, breaking his maiden in his second start at Lyon on June 9, and he duly caught the attention of agent Rupert Pritchard-Gordon, who went to €200,000 for the 3-year-old entire. Caliyoun is out of a half-sister to G1 Poule d'Essai des Poulains winner and sire Clodovil (Ire) and the G3 Gordon Richards S. scorer Columbian (Ire) (Azamour {Ire}), and they are out of the G2 Prix de l'Opera victress Clodora (Ire) (Linamix {Fr}).