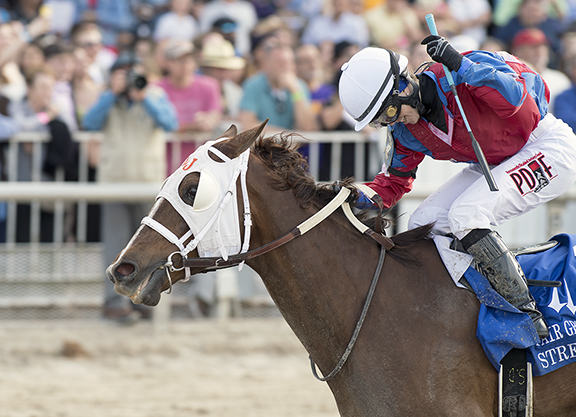 Street Band sprung a 10-1 upset and stamped her ticket to Churchill Downs on the First Friday in May with a decisive score in the GII Fair Grounds Oaks. Saving ground early, Street Band raced in a joint third just off the heels of heavily favored MGSW Serengeti Empress (Alternation), who registered comfortable early splits pf :24.12 and :47.48. Liora gunned up the outside to seize control rounding the far turn and the chalk threw in the towel, quickly fading on the fence. Taken out two wide on the turn, Street Band was just finding her best stride in the final sixteenth and coasted clear of Liora late to win as she pleased. Liora held second over Sweet Diane and favored Serengeti Empress was pulled up and vanned off. Afterwards, her conditioner Tom Amoss said, “She bled. She's 100% sound.”

“In the last race, her head was up, I was getting hounded from behind and I didn't have as much room,” said winning rider Sophie Doyle. “Today we just had a beautiful trip and everything set up right. Her head dropped down today and she traveled into the bit, the last time her head was up and she was fighting me a bit and every step was like relax filly, relax. Today she took it like a professional and traveled great. When I asked her down the back, I just squeezed and said what do we have in the tank at this point. She filled her lungs up again around the turn and, when I called on her, she got that little split to make a run and she opened up and she exploded.”

This was the fourth Fair Grounds Oaks victory for trainer Larry Jones, whose past winners include MGISW I'm a Chatterbox (Munnings) (2015) and GI Kentucky Oaks heroines Believe You Can (Proud Citizen) (2012) and Proud Spell (Proud Citizen) (2008). Jones did capture his third Kentucky Oaks in 2015 as well, but did so with I'm a Chatterbox's stablemate Lovely Maria (Majesticperfection). In addition to the aforementioned Jones fillies, the Fair Grounds Oaks has produced seven other Kentucky Oaks winners in Untapable (2014), Rachel Alexandra (2009), Summerly (2005), Ashado (2004), Silverbulletday (1999), Blushing K. D. (1997) and Tiffany Lass (1986).

Closing out her sophomore campaign with a third-place finish in a NOLA optional claimer Dec. 21, Street Band opened her sophomore account with a nose victory over this strip Jan. 13 and was fourth to Serengeti Empress last time in the GII Rachel Alexandra S. Feb. 16.

Street Band is the fifth graded winner and ninth black-type winner for her sire Istan. Jones trained her dam Street Minstrel, a daughter of GISW Minstrel's Lassie (The Minstrel), to a pair of victories at Oaklawn Park in 2007. All six of her foals of racing age are winners, but Street Band is her first black-type victress. The 15-year-old mare produced a full-sister to the winner in 2017 named Street Missy and had a Summer Front colt in 2018. Street Minstrel was bred back to that young Airdrie stallion last season.