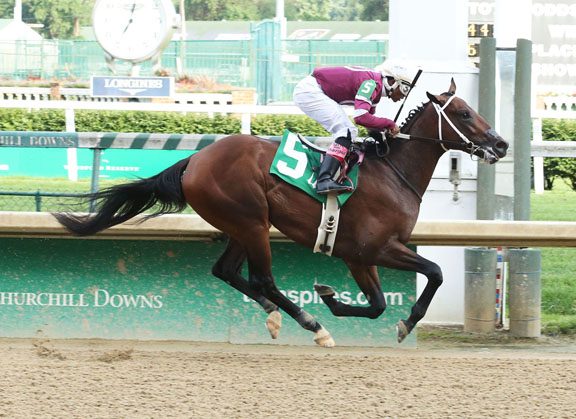 Named for the first American horse to win England's G1 Epsom Derby, the GIII Iroquois S. at Churchill Downs, a 'Win and You're In' for the GI Breeders' Cup Juvenile, gets fall racing in the juvenile division started in earnest.

Worth 10 points on the “Road to the Kentucky Derby,” it's hard to look past Tight Ten (Tapit) in this year's renewal, who brings the strongest credentials to the inexperienced field. After breaking his maiden by 4 1/4 lengths on this very surface on June 28, his connections thought enough of him to jump into the deep end and were rewarded with a good second in the GII Saratoga Special S. Aug. 12. He hasn't been farther than 6 1/2 furlongs, but he's not the only one stretching out for the first time here and owns by far the highest Beyer Speed Figure in the field of 80.

Tight Ten's stablemate Tobacco Road (Quality Road) is one of only two stakes winners in the field. He came out of the same maiden as Tight Ten June 28, and although he failed to hit the board that day, he has been perfect since. He parlayed a daylight July 29 maiden special weight at Ellis Park into a hard-fought victory in the Ellis Park Juvenile S. Aug. 19.

Any runner coming from the deep pool of Saratoga maidens has to be taken seriously, and Cairo Cat (Cairo Prince) is no exception. He debuted on the Saratoga turf at this very distance July 21, with no impact, but switched to the main track when a seven-furlong maiden was taken off the lawn Aug. 11 and nailed the win at the wire. The third-place finisher that day was Opry (Declaration of War), who returned to break his maiden in the GIII With Anticipation S.

Perhaps the most enigmatic horse in the field is Synthesis (First Samurai). He's a maiden in four starts, but has never been worse than fourth and has a third in the Aug. 11 GII Best Pal S. at Del Mar on his resume. He's been knocking heads with an extremely tough California contingent, including 'TDN Rising Star' Instagrand (Into Mischief), as well as uber-impressive debut winners Rowayton (Into Mischief) and Sparky Ville (Candy Ride {Arg}).