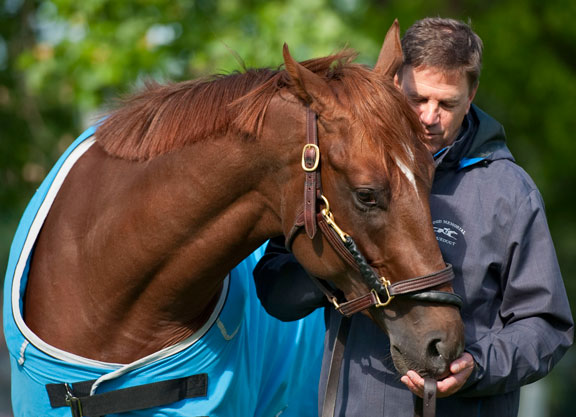 “He needed to have a decent work and needed to do it the right way and I think he did,” Motion explained. “He went off in :12 4/5 and basically went in 12s [12-second furlongs] from there and he galloped out very well. I was very pleased.”

Perfect in his first three career appearances, including a comprehensive defeat of champion Classic Empire (Pioneerof the Nile) in the GII Lambholm South Holy Bull S., the homebred stubbed his toe when seventh to Gunnevera (Dialed In) in the GII Xpressbet Fountain of Youth S. Confidence was restored in no uncertain terms when Irish War Cry streaked home to win the GII Wood Memorial S., but he could manage only a 10th behind Always Dreaming (Bodemeister) in the GI Kentucky Derby.

“After the Derby, I really had no plans of running in any of the other Triple Crown races, I was pretty discouraged,” Motion acknowledged. “But he's done well since. We kind of wanted to get him home and regroup and this is where he's used to being in his own environment.

“I planned to go easy on him for a couple of weeks, but I started him back galloping sooner than I expected. Once I saw the Preakness results and saw how he was doing, we got to thinking about [the Belmont].”