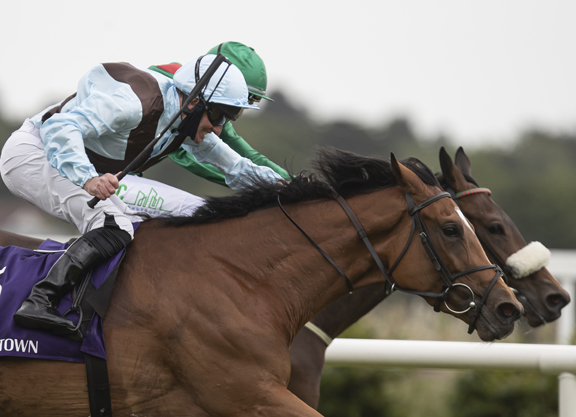 Aidan O'Brien will be looking to bring down more barricades on Saturday as he chases the record of Sir Michael Stoute in The Curragh's G1 Juddmonte Irish Oaks. With five wins in the mile-and-a-half Classic, he sits one shy of the tally wracked up over the decades by the Newmarket-based legend and it will be no surprise were he to join him in 2020. Four fillies contest the latest renewal from Rosegreen, with Evie Stockwell's G1 Epsom Oaks and G2 Ribblesdale S. runner-up Ennistymon (Ire) (Galileo {Ire}) the current standard-bearer on that form. Normally, being beaten nine lengths in the Epsom monument would be no commendation coming into this equivalent, but to be that distance from her exalted stablemate Love (Ire) (Galileo {Ire}) is probably creditable. “We've been very happy with Ennistymon since her last run in Epsom. She ran a great race, so we're looking forward to this,” O'Brien said.

Ennistymon's rider Wayne Lordan was on Snow (Ire) (Galileo {Ire}) when she beat her elders in the G3 Munster Oaks at Cork July 5, which was her first try at this trip. Previously runner-up in the June 21 G3 Blue Wind S. over 10 furlongs June 21, the full-sister to Kew Gardens (Ire) is charting the kind of progress that makes one from her stable with her pedigree impossible to discount in this company. That also applies to Laburnum (Ire) (Galileo {Ire}), who came off second-best in a tussle with the Ger Lyons-trained Even So (Ire) (Camelot {GB}) in the Listed Naas Oaks Trial over a mile and a quarter last time July 4.

“We were delighted with Laburnum the last day, she was very inexperienced going into it–a baby, really,” O'Brien said of the full-sister to Roderic O'Connor (Ire). “When she won her maiden she didn't know much, so we felt that she had to run again to learn. She seems to be in good form and is stepping up to a mile and a half. It will be very interesting to see what happens with her, but there is every chance she is going to move up plenty. She is a very straightforward filly.”

Earlier on the Curragh card, the O'Brien-Lordan combination is in evidence in the G2 Paddy Power Minstrel S. on the exciting Lancaster House (Ire) (Galileo {Ire}), who beat the high-class Speak In Colours (GB) (Excelebration {Ire}) with authority in the G3 Gladness S. over this seven-furlong trip June 13. He has to contend with last year's winner Romanised (Ire) (Holy Roman Emperor {Ire}), who stages his return to action for Robert Ng and Ken Condon. Already successful in the 2018 G1 Irish 2000 Guineas, he proved himself a genuine top-class performer on his latest two outings when winning the G1 Prix Jacques le Marois and finishing runner-up in the G1 Prix du Moulin.

Earlier in the afternoon, Newbury host the G3 bet365 Hackwood S. for the sprinters, with Sheikh Mohammed Obaid Al Maktoum's TDN Rising Star Repartee (Ire) (Invincible Spirit {Ire}) looking to step up on his winning return in Windsor's Listed Carnarvon S. over this six-furlong trip June Jun 28. Among the unexposed 3-year-old's opponents is last year's G2 City of York S. winner Shine So Bright (GB) (Oasis Dream {GB}), who was third when attempting to force the issue in the seven-furlong Listed Surrey S. at Epsom July 4. “As long as the ground is on the quick side, I would hope he'll run very well. I think they're calling the ground good at the moment and as long as it stays that way, I'm sure he'll be fine,” trainer Andrew Balding said. “He's a very useful horse on his day and I was happy with his last run at Epsom.”

Also on the card is the Listed bet365 Rose Bowl S. over six furlongs, where Manton Park Racing's Method (Ire) (Mehmas {Ire}) bids to uphold the form of his Doncaster debut June 26. Having beaten the subsequent G2 Duchess of Cambridge S. runner-up Fev Rover (Ire) (Gutaifan {Ire}) there by 4 1/4 lengths,  there is an understandable air of excitement surrounding the latest Martyn Meade project. “He was quite impressive at Doncaster, but this is a totally different ball game,” he said with a dash of humility. “He's come out the race really well and I'm expecting him to progress and make a good showing of himself. It's a natural stepping-stone. It's just the right sort of race for him. I think he learnt a lot the other day.”