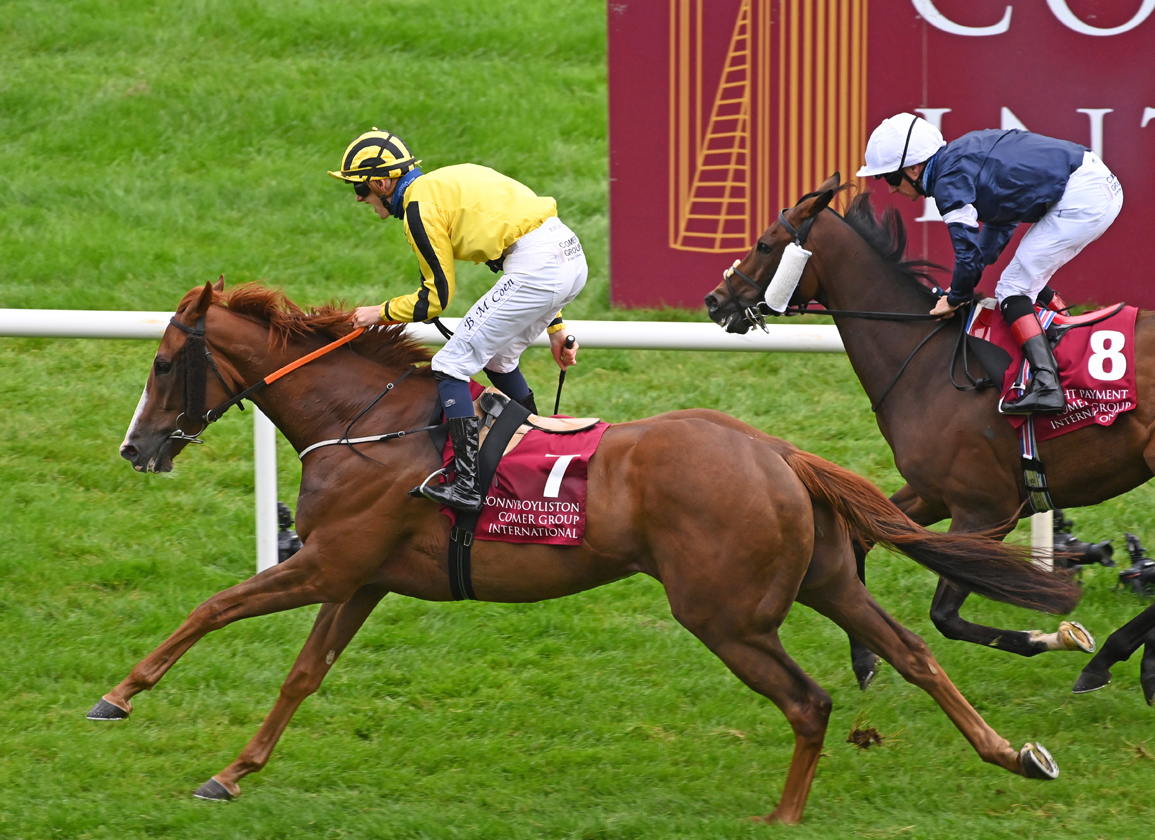 Underlining the strength of York's revamped Ebor H., the Kildare Racing Club's Sonnyboyliston (Ire) (Power {GB}) bounced out of his success in that prestigious affair to bring up a notable double in Sunday's G1 Comer Group International Irish St Leger at The Curragh. With the dual winner Search For a Song (Ire) (Galileo {Ire}) unable to make an impact this time, the Johnny Murtagh-trained 4-year-old had the Joseph O'Brien pair Twilight Payment (Ire) (Teofilo {Ire}) and Baron Samedi (GB) (Harbour Watch {Ire}) to contend with and proved toughest to carry off the prize. Settled fifth off the gruelling pace which strung the field out, the 4-1 second favourite mastered Twilight Payment approaching the furlong pole and battled to a 3/4-of-a-length verdict over that rival, with Baron Samedi 1 1/2 lengths away in third. “I couldn't have asked it to go any better, we jumped and he got a lovely tow into the race,” Coen said. “They turned it into a real staying race and this lad keeps improving and keeps finding a way to win. This is my first proper year as number one jockey to Johnny and we've had a few good spins in England, but I really wanted to get this group 1 winner. For it to be a Classic and for Johnny is unbelievable.”

It was on this card 12 months ago that Sonnyboyliston burst onto the scene with a 4 1/4-length success in the 10-furlong “Northfields” H., where the subsequent G1 Tattersalls Gold Cup hero Helvic Dream (Ire) (Power {GB}) was back in third. That followed a narrow verdict over Thundering Nights (Ire) (Night of Thunder {Ire}) over the same course and distance in July and the eventual exploits of that filly now show that performance in a positive light. Starting this term with third placings behind the Ballydoyle duo Broome (Ire) (Australia {GB}) and Japan (GB) (Galileo {Ire}) in the Listed Devoy S. at Naas Mar. 28 and the May 6 G3 Ormonde S. at Chester respectively, the chestnut took Limerick's Listed Martin Molony S. over 12 1/2 furlongs June 18 before finishing sixth over the Ebor track and trip in the July 10 G3 Silver Cup.

Coming out on top in his battle with the talented Quickthorn (GB) (Nathaniel {Ire}), who has also come out to score subsequently in dramatic style in a conditions race at Salisbury, Sonnyboyliston had every bit of resilience tested here with the G2 Curragh Cup winner Amhran Na Bhfiann (Ire) (Galileo {Ire}) storming off in front. Twilight Payment attacked first in the straight and at first glance he looked to be travelling sweeter than the Murtagh stalwart in behind, but as soon as it became a true grind the winner came into his own to give the best time performance of the day. Search For a Song, who was sent off the 10-3 favourite, flattered briefly in the straight but was unable to get involved in the fight and ended up sixth.

Murtagh was keen to deflect praise afterwards. “I'm just a front man to a lot of people who do a lot of hard work,” he said. “I'm so proud of everybody behind the scenes and my family also. It means a lot to win a Classic on your local track. This horse never disappoints and I thought he did very well to win today. It looked like a proper race and he had a good position all the way. He comes off the bridle, but I thought from two furlongs out Ben looked confident on him. He got into a battle, but he never lacks in a battle. I can't say enough about the horse and enough about Liam Clarke and the Kildare Racing Club. They have been great supporters of mine from the word go. It would take a fair offer to take him away from the owners now, but the Melbourne Cup is worth €2.5million. It mightn't be for him this year, but he's only four and could end up down there for us sometime yet.”