Irish Guineas Hangs In The Balance 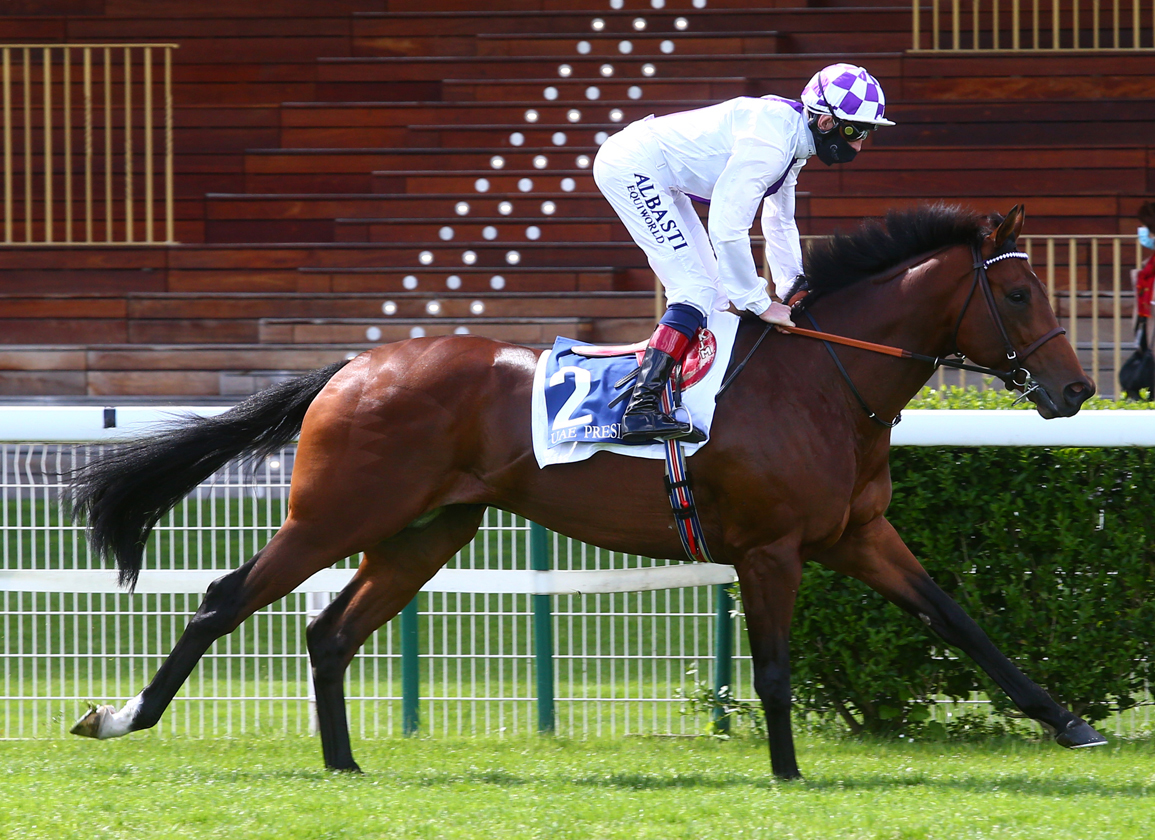 Saturday's Curragh card which features the G1 Tattersalls Irish 2000 Guineas is in doubt after 35 millimetres of rain hit the track overnight Thursday. With a morning inspection called, chief executive Pat Keogh is hoping for a turnaround with the course currently waterlogged in places.

“We got a lot more rain than we anticipated overnight. We were forecast 15 millimetres at the most in the last 24 hours,” he explained on Friday. “It's come completely out of left field, unfortunately. The track would not be raceable today. We'll just have to monitor things as we go along. If more rain came than was forecast, that would give us a problem. We're hopeful, but we will have a precautionary inspection tomorrow morning.”

In the event the fixture takes place, an ability to handle testing ground is obviously a given and with the easy surface in part to blame for the eclipse of Poetic Flare (Ire) (Dawn Approach {Ire}) in Sunday's G1 Poule d'Essai des Poulains, it is hard to see Jim Bolger welcoming the deluge for the seeker of the prestigious G1 English-Irish 2000 Guineas double. He does have a proven lover of the ground as back-up in Mac Swiney (Ire) (New Approach {Ire}), who relished similar conditions when taking the G1 Futurity Trophy at Doncaster in October. If he is none the worse for his infection suffered when fourth in the G3 Derrinstown Stud Derby Trial at Leopardstown May 9, the homebred is made for the stamina test this race will provide.

Another with Group 1-winning form on testing ground is Van Gogh (American Pharoah), who was very much at home on it when taking Saint-Cloud's G1 Criterium International by four lengths in October. Out of the 2001 G1 Irish 1000 Guineas heroine Imagine (Ire) (Sadler's Wells), he ran eighth in the May 1 G1 2000 Guineas at Newmarket on contrasting ground and Aidan O'Brien expects improvement.

“He was very close to being fifth in the Guineas, he just got tired in the last 50 yards,” he said. “Maybe our Newmarket horses were a couple of weeks behind where we thought they were. He came out of the race very well. He is a big, strong traveller. He had very good form at the back end of last year and we have been very happy with him since as well. I don't think he is a horse that needs soft ground. His form ended up on soft ground at the end of the year, but that was just because of the weather.”

Runner-up in a soft-ground G1 Dewhurst S., Wembley (Ire) (Galileo {Ire}) is the pick of Ryan Moore and he is looking for a much-improved performance from him and another Newmarket Guineas disappointment in Battleground (War Front). The latter ploughed through the soft when winning the Listed Chesham S. at Royal Ascot last June, but there is more evidence that Wembley will be able to give his best on this type of ground.

“Our three colts are on a retrieval mission after the 2000 Guineas, though to be fair I thought Van Gogh shaped very well there on ground that would have been too quick for him and this deeper surface will really play to his staying strengths,” he said. “Clearly, Wembley and Battleground didn't run up to expectations at Newmarket, but we know both are much, much better than that and Wembley is another colt who will prefer this softer ground. He just wasn't himself at Newmarket and I wasn't hard him on there once his chance had clearly gone at the two-furlong pole. It was soft when he finished second to the French Guineas winner St Mark's Basilica (Fr) (Siyouni {Fr}) in the Dewhurst, and we clearly anticipate better from him and Battleground here.”

It is hard to be categoric about the ground for Zhang Yuesheng's Lucky Vega (Ire) (Lope de Vega {Ire}), as he took this track's G1 Phoenix S. on good-to-yielding in August and is by a sire whose progeny excel when there is cut underfoot. Handling a quick surface when third in the 2000 Guineas, he will have his stamina stretched by this examination and trainer Jessie Harrington is far from confident about his ability to handle conditions.

“The ground won't suit him, but it's going to be the same for all of them,” she said. “I've been very happy with him since Newmarket.”

Godolphin's 'TDN Rising Star' La Barrosa (Ire) (Lope de Vega {Ire}) is another unproven on this going, having flopped when fifth in the Criterium International but he was back to form when runner-up to Master of the Seas (Ire) (Dubawi {Ire}) in Newmarket's G3 Craven S. over this mile trip last time Apr. 15.

“La Barrosa disappointed on testing ground at Saint-Cloud, but we feel there were other contributing factors that day,” Charlie Appleby explained. “It was the end of the season and he scoped dirty post-race, so I think you can put a bit of a line through that run. His preparation has gone well and he put up a very good performance behind Master of the Seas on his three-year-old return. A repeat of that effort should make him very competitive.”

There has to be doubts as to whether the Ballydoyle support cast will turn up in their expected numbers, with the Apr. 10 Dundalk maiden winner Cadamosto (Ire) (No Nay Never) already a non-runner on five occasions this term. He is due to take part in the G3 GAIN Marble Hill S., where stablemate The Entertainer (Ire) (Caravaggio) is also engaged having scored on his sole start at Navan last Saturday. Deep ground is an unknown in general for juveniles and it will be interesting to see if the well-regarded Donnacha O'Brien-trained Masseto (GB) (Territories {Ire}) lines up against the colt he beat on debut at Navan Apr. 25, Celtic Times (Ire) (Dawn Approach {Ire}).

Also on the card is the G2 Weatherbys Ireland Greenlands S., where the Hambleton Racing colourbearer Glen Shiel (GB) (Pivotal {GB}) reappears under a three-pound penalty for his success in the G1 QIPCO British Champions Sprint S. in similar conditions in October. Also forced to carry a penalty is Teruya Yoshida's Champers Elysees (Ire) (Elzaam {Aus}) in the G2 Lanwades Stud S., with the G1 Matron S. scorer hardened by a return fourth in the seven-furlong G3 Athasi S. at The Curragh May 3.

At a similarly rain-hit Haydock, the six-furlong G2 Sandy Lane S. and G2 Temple S. over five will represent wars of attrition for the sprinters. Slow, sapping ground is a question mark for Yoshiro Kubota's unbeaten 'TDN Rising Star' Dragon Symbol (GB) (Cable Bay {Ire}) in the Sandy Lane, given how electric he was on good-to-firm at Hamilton May 2.

“He has done everything right so far this year and he answered everything that we have asked of him since his debut on the all-weather,” trainer Archie Watson said. “He is going back up to six furlongs and we are hopeful that he will handle the softer ground up there, as the ground was quick last time out at Musselburgh. This is a big step up in class and it should give us an idea of where we are with him.”

Shadwell's G3 Horris Hill S. winner Mujbar (GB) (Muhaarar {GB}) loves it deep and is a proven stayer at this trip, so everything is set up for a big effort from the half-brother to the G1 Commonwealth Cup hero Eqtidaar (Ire) (Invincible Spirit {Ire}).

“He is obviously proven on soft ground, as he won his Group 3 in those conditions at Newbury last year,” trainer Charlie Hills said. “I was slightly disappointed with his run in the Greenham, but I've been really pleased with him since and he is training a lot better now. For some reason at Newbury he just ran a bit fresh with the choke out and that probably cost him.”

In the Temple, a clutch of classy sprint fillies and mares trained in the North clash with Liberty Beach (GB) (Cable Bay {Ire}), Lady In France (GB) (Showcasing {GB}) and Keep Busy (Ire) (Night of Thunder {Ire}) having been third, fourth and fifth respectively in ParisLongchamp's G1 Prix de l'Abbaye in October. John Quinn trains Liberty Beach and Keep Busy and said of them, “They are two good fillies and you have got to run them somewhere, it would be unfair not to run one of them so we're just hoping for a bit of luck. I don't think any extra rain would be a problem for either of them. They've form in good ground and they have shown they go in soft ground, which is important. Liberty Beach was a very good 2-year-old and showed very strong form last year while Keep Busy was a very tough two year old and has just kept on improving.”

In Sunday's G1 Tattersalls Irish 1000 Guineas, John Oxley's 'TDN Rising Star' Pretty Gorgeous (Fr) (Lawman {Fr}) heads 14 fillies with soft ground holding no fears based on the evidence of her impressive success in Newmarket's G1 Fillies' Mile in October. Denied the chance to contest the May 2 Newmarket Classic due to an unsatisfactory scope, she will not be renewing rivalry with her G1 Moyglare Stud S. conqueror Shale (Ire) (Galileo {Ire}) after that peer was a significant scratching at the confirmation stage on Friday. Drawn widest of all, she encounters Doreen Tabor's G2 Lowther S. winner Miss Amulet (Ire) (Sir Prancealot {Ire}), who was taken out of Sunday's G1 Poule d'Essai des Pouliches at ParisLongchamp but has fared little better with the draw here in 12. Also wide in 11 is Derrick Smith, Susan Magnier and Michael Tabor's May 9 G3 Irish 1000 Guineas Trial scorer Joan of Arc (Ire) (Galileo {Ire}), while the May 2 G1 1000 Guineas third Fev Rover (Ire) (Gutaifan {Ire}) is in nine.