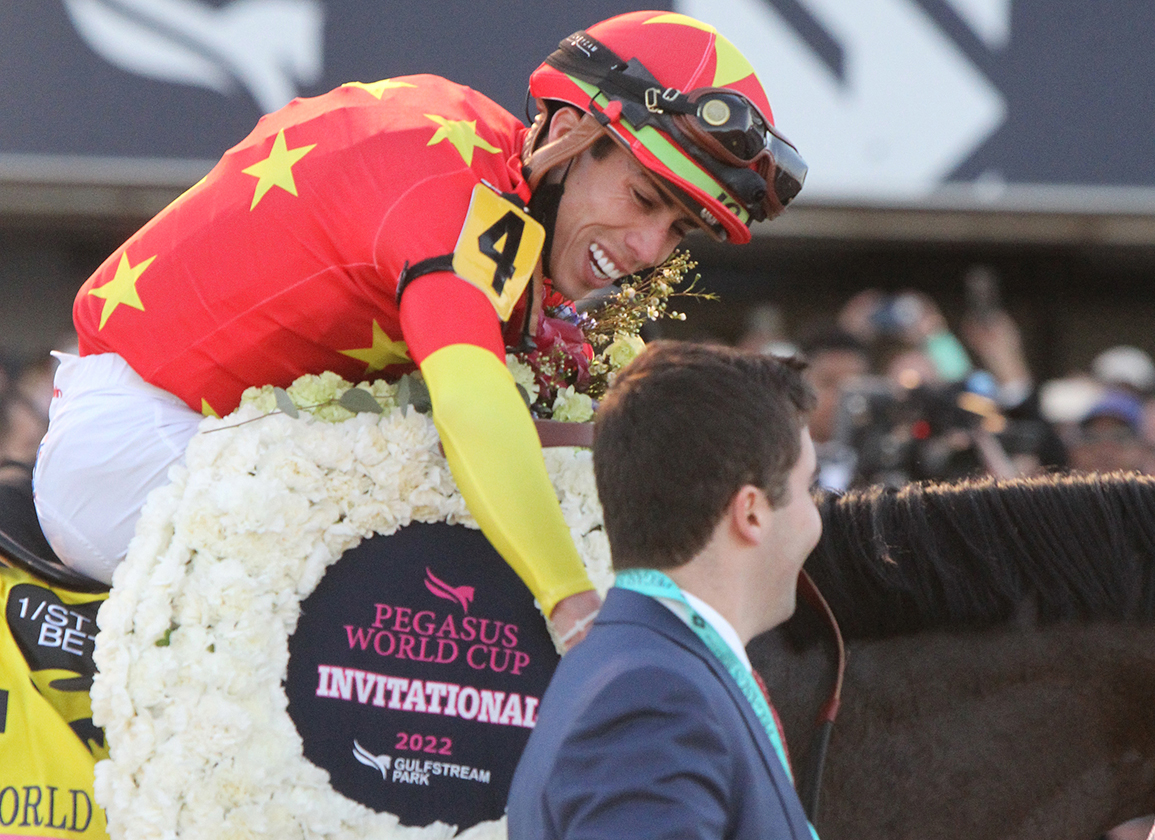 Irad Ortiz, Jr. after winning the Pegasus aboard Life Is Good | Horsephotos

It was an eventful few months for three-time Eclipse champion jockey Irad Ortiz, Jr. Shortly after scoring a hat trick of victories at the Breeders' Cup, Ortiz was suspended 30 days for careless riding at Aqueduct. Upon his return, the 29-year-old picked up where he left off at Gulfstream, piloting winners left and right and over the weekend, added two more seven-figure Grade I wins to his trophy collection with victories in the Pegasus World Cup Turf Invitational S. on back-to-back winner Colonel Liam (Liam's Map) and Pegasus World Cup Invitational S. aboard emergent superstar Life Is Good (Into Mischief). Tuesday, the sometimes polarizing rider sat down with the TDN Writers' Room presented by Keeneland as the Green Group Guest of the Week to discuss his success, his suspension, his rise to the top of the game and whether or not he pays attention to either the positive or negative attention he receives from racing fans.

“Honestly, I know my horse is fast, but I never thought I was going to be on the lead by three or four lengths,” Ortiz said when asked if he was surprised by how easily Life Is Good outran presumptive Horse of the Year Knicks Go (Paynter) in the Pegasus. “But that's racing. [Sometimes] after the gates open, everything changes. I let him go into the first turn and then I just used my judgment. He was feeling good, he was running relaxed and going the right way, so I just didn't mess with him, I let him do his thing and keep going. The difference between him and some other horses; some other horses can go fast and hold their speed for six furlongs or a mile, but he can stay the distance. It's really hard to find a horse that can stay with his same speed and finish the way he finishes.”

Asked about the 30-day suspension he was handed by New York Racing Association stewards for a Dec. 3 incident in which he crowded a horse on the rail, causing apprentice jockey Omar Hernandez Moreno to fall off his mount, Ortiz took responsibility and said he had no issue with the punishment.

“We learn from our mistakes,” he said. “I made a mistake, it was not intentional, but I'm grateful and glad that the kid is okay. The stewards did their job. I agreed with them 100%. They gave me 30 days and I took it right away, I didn't say anything because I knew I made a mistake, so I'll pay for it. That's why they're there, to watch everybody and try to keep all the jockeys safe. I'm not perfect, I'm human, and now I'll just turn the page, learn from it and try not to do that again.”

Ortiz was also asked to reflect on his meteoric rise to the top of racing and whether or not he foresaw this level of success when he first came over to the mainland U.S. in 2011.

“I'm grateful and I thank god I am where I am, but when you get here, there are a lot of good jockeys,” he said. “I work hard, but you never know what's going to happen. Are you going to get the opportunities right away or not? Sometimes it'll take you five, six, seven, eight years until people start giving you a chance. So I always had big dreams, but I never pressured myself like, 'I have to be there.' It never was like that. I just worked step by step and tried to do the right thing every time someone gave me an opportunity. And that's the way we did it. My agent, Steve Rushing, does a great job, and since I started working with him, everything changed a little bit. I got better numbers. I got better chances. We got better horses. You need a little bit of everything: you need a good agent, you need to do the right thing, you need the right horses and you need the opportunity from the owners and trainers.”

Elsewhere on a jam-packed show, which is also sponsored by Coolmore, West Point Thoroughbreds, Lane's End, the Kentucky Thoroughbred Owners and Breeders, XBTV and Legacy Bloodstock, the writers discussed the courtroom drama in Seth Fishman's doping trial, the back-and-forth of the Bob Baffert vs. NYRA hearings and T.D. Thornton's comparison of racing's current era to the steroid era in baseball. Click here to watch the podcast; click here for the audio-only version or find it on Apple Podcasts or Spotify.