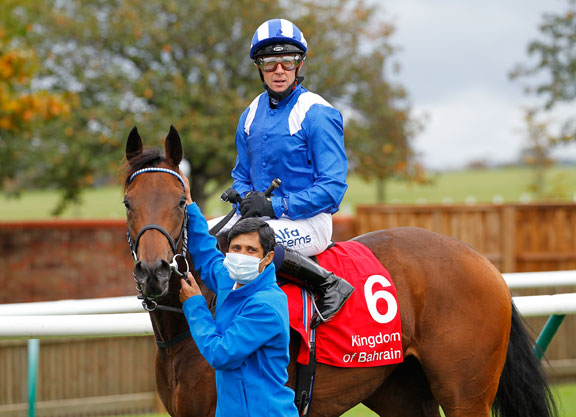 Perhaps something of a forgotten horse entering Saturday's G1 Kingdom of Bahrain Sun Chariot S. at Newmarket, Shadwell's Nazeef (GB) (Invincible Spirit {Ire}) roared back to prominence to provide John Gosden with a major pre-Arc boost. Rested after an uncharacteristically tame ninth in the 10-furlong G1 Prix Jean Romanet at Deauville Aug. 23, the G1 Falmouth S. heroine was handily placed among the group racing towards the stand's side from the outset by Jim Crowley. Responding to driving to challenge passing the two-furlong pole, the 17-2 chance kept on resolutely to deny Half Light (Ire) (Shamardal) by 1 1/2 lengths, with Cloak of Spirits (Ire) (Invincible Spirit {Ire}) a neck away in third and the 11-4 favourite Champers Elysees (Ire) (Elzaam {Aus}) a further half a length behind in fourth. “She's as tough as nails,” Crowley commented. “It's a great performance from John Gosden to prepare her to be at her best for this. He gave her a break after France and she's come back to win a proper group 1.”

Nazeef has been a cornerstone of Shadwell's golden year, having hinted at better to come when signing off her 3-year-old campaign with a six-length handicap success on fast ground over this course and distance in September. Instantly rewarding the decision to keep her around for 2020, the bay beat last year's Sun Chariot winner Billesdon Brook (GB) (Champs Elysees {GB}) in the June 3 Listed Snowdrop Fillies' S. on Kempton's Polytrack. Taking her form to another level when adding Royal Ascot's G2 Duke of Cambridge S. to her tally June 16, she came back to her home town to up her level once more by winning the Falmouth on the other track July 10. Offering enough evidence that a mile and a quarter was not out of bounds when a staying-on third in the G1 Nassau S. at Goodwood 20 days later, she had run no sort of race on deep ground in the Jean Romanet but was probably in need of a freshener by then.

This was as strong a Sun Chariot as has been staged for some time, with the field spread out across the Rowley Mile and no excuses for the beaten horses other than a failure to handle the ground. Nazeef and Half Light were wide apart from two out as Cloak of Spirits hung tough on the front end, but once she had nosed ahead approaching the furlong pole there was only going to be one result with her gameness guaranteed. The G1 Matron S. winner Champers Elysees deserved credit as the only filly to make up ground from behind, but in the demanding going it proved hard work for her to bridge the gap to rivals that were still rolling.

“For Newmarket this is soft, it is quite testing by our standards here,” Gosden said. “I think she asserted well in the last 50 yards. She is a tough filly. She was in handicaps last year and it's been a fantastic year for her. I think it was a career-best. In the Falmouth, it was heads and necks and she battled–she is gritty and an assertive filly. You never think you are going to go from a handicap to knocking off two group ones at Newmarket, but she is a willing filly to train. She is quite lazy in her work and looks after herself. She is not one of those horses that wants to over-do and I think that is a big factor with her.”

Nazeef's future is undecided and her trainer added, “It's up to the owner-breeder and he may decide to send her to the breeding sheds. He may decide to run her next year or have a run in America. I think the key thing is the next 10 days–she will tell us if she wants to do any more or not. Those are the options–retire, race next year or Breeders' Cup. I'm pretty sure she has a QEII entry and that is another one you can look at. We will put them all on the table and see what we want to do.”

Godolphin's Lisa-Jane Graffard said of the runner-up, who had also been in that position in the G1 Prix Rothschild, “We are absolutely delighted with Half Light, who doesn't know how to run a bad race. William Buick was very complimentary about her afterwards and felt that it might be worth carrying on with her this season. We will get her back to France and see how she comes out of the race, but she could well go for another group 1 race somewhere.”