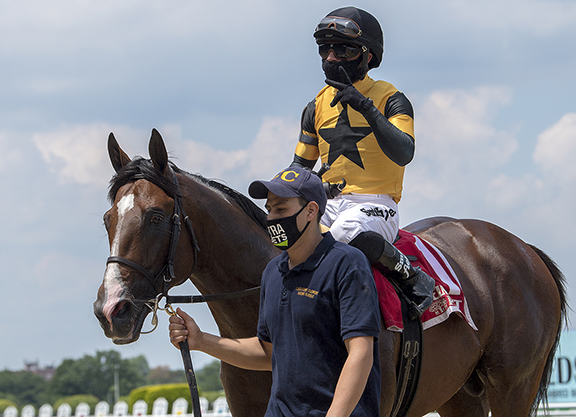 Four-for-six Decorated Invader (Declaration of War) appears awful tough to beat in Saturday's GII National Museum of Racing Hall of Fame S. at Saratoga. Second to subsequent MGSW Field Pass (Lemon Drop Kid) on local debut here a year ago, he broke through convincingly next out before notching a big win in Woodbine's GI Summer S. in September. He could only manage fourth in the GI Breeders' Cup Juvenile Turf after a tough trip that had many arguing that he might've been best, and he's lent support to that claim so far this season. He flew home from far back to annex Gulfstream's Cutler Bay S. Mar. 28, and made short work of five rivals in the GII Pennine Ridge S. at Belmont June 20. The biggest question for Decorated Invader appears to be how he'll handle nine furlongs–all his prior efforts have come over at least a sixteenth shorter.

“The challenge is when you have a horse that's a standout in a short field, there's going to be a target on his back,” said Terry Finley of co-ownerWest Point Thoroughbreds. “The break and the first eighth of a mile will be important. Ultimately, it will be up to [jockey] Joel [Rosario]. He really fits the horse. When they walk out of the paddock, you just have so much confidence and no concerns that you'll get a top class ride from him. It's very good to have the option to be a closer, but we have seen time and time again where you have the best horse in the race, and they [the pacesetters] don't come back.”

Decorated Invader isn't the only Christophe Clement-trained son of Declaration of War entered in the Hall of Fame–he'll also send out Gufo, who has won his last four starts, including Delaware's GIII Kent S. over this distance two weeks ago.

Hall of Famer Bill Mott owns a record seven victories in this race–including in 2019–and will be represented by June 20 Churchill allowance winner Moon Over Miami (Malibu Moon). Future Hall of Famer won this event four years in a row from 2015 to 2018 (he also won it in 2011), and will saddle two-for-two Domestic Spending (GB) (Kingman {GB}) for Seth Klarman's Klarvich Stables.