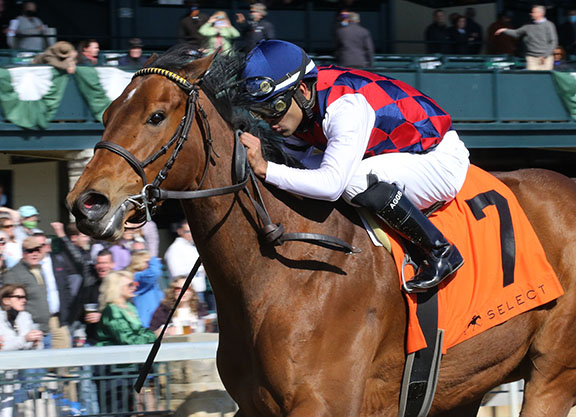 Making her first start on a conventional dirt surface after crossing the line best in two previous tries over the Turfway Tapeta, Three Chimneys Farm LLC's Twenty Carat (Into Mischief) attended a strong pace while four deep, came calling for the lead in upper stretch and powered home to prove a convincing winner of Friday's co-featured GIII Beaumont S. on opening day of the Keeneland spring meeting.

Drawn widest in a field of seven, the homebred showed good gate speed and led the Beaumont field out of the chute before settling to track the pace wide of the rail-skimming My Girl Red (Texas Red) and last-out Any Limit S. winner Farsighted (Bernardini) through an opening quarter of :22.18. Warming up to the task three abreast at the five-sixteenths, Twenty Carat traveled comfortably on the swing for home, was roused to the lead at the head of the lane, was a bit tardy switching her leads and drove under the line a clear-cut winner. 'TDN Rising Star' Slumber Party (Malibu Moon), who looked to have speed to contest the early issue, was slowly away and raced in the second half of the field before launching a rail rally that carried her into second. Amalfi Princess (Temple City) was well spotted just behind the early pacesetters, but lacked a late bid and checked in third.

“She's always been a lovely filly, done everything right. I'm very thankful that Mr. [Goncalo] Torrealba and his team [at Three Chimneys],” said winning trainer Wesley Ward. “I think this filly has a big future, and we're looking forward to it.”

Twenty Carat crossed the line first in her Jan. 15 debut at Turfway, only to be disqualified and placed second behind Wait For Nairobi (Carpe Diem), next-out winner of the Cincinnati Trophy S. in Florence. The bay was the lopsided, 7 3/4-length winner of a Feb. 25 maiden and negotiated this hike into graded company with aplomb.

Twenty Carat is the 93rd stakes winner and 40th graded winner for Into Mischief and the uber-successful sire's second winner of the Beaumont in the span of four years, joining Gas Station Sushi (2018). She is also the 47th stakes winner and 26th graded winner out of a daughter of Bernardini, also the damsire of Into Mischef's talented son Owendale, as well as GIII Distaff H. winner Paris Lights (Curlin).

Secret Jewel cost Besilu Stables $1.2 million at KEESEP in 2012 owing a great deal to the exploits of her half-sister Shared Account (Pleasantly Perfect), runner-up in the GI QE II Challenge Cup at Keeneland in 2009 a little more than a year before she caused a major upset in the 2010 GI Breeders' Cup Filly & Mare Turf at Churchill. She has since gone out to produce 'TDN Rising Star' and GI Breeders' Cup Juvenile Fillies Turf victress Sharing (Speightstown) as well as SW Riley's Choice (Distorted Humor).

Secret Jewel is the dam of a 2-year-old colt by Three Chimneys' Gun Runner, a yearling colt by the Horse of the Year and was most recently bred to Street Sense.