Into Mischief's Practical Joke Comes Through for Popular Jerkens Score 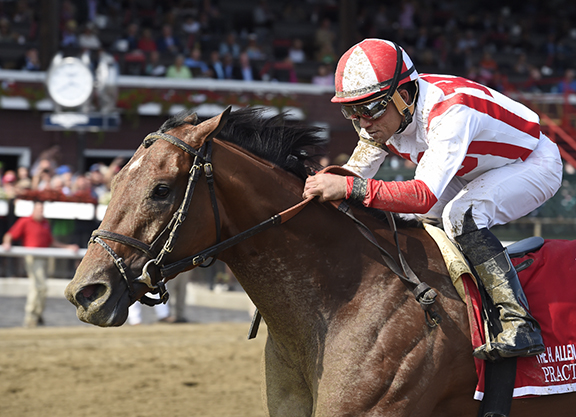 Practical Joke, seemingly everyone's pick for the GI H. Allen Jerkens S. for months now, made it a perfect five-for-five in races around one turn with this smart, ground-saving success as the slight favorite.

Away in good order from his rail draw, he was patiently handled in seventh as 'TDN Rising Star' Takaful was on the engine through an opening quarter in :22.36. Practical Joke, a good last out third going 1 1/8 miles in the GI Haskell Invitational S. at Monmouth July 30, began to creep closer beneath Joel Rosario while saving every inch of ground on the far turn, was swung off the fence into the stretch and turned it on nicely down the lane to run past the game pacesetter.

“To cut back all the way to seven-eighths after a tough race in the Haskell, I'm so proud of this horse,” winning trainer Chad Brown said. “He's so versatile. It was his third race in seven weeks. He's our iron horse. The rail draw can be tricky going seven-eighths. I was a little worried about it when it came out. Once he came off the turn and the had the momentum, he looked like the winner to me.”

Brown continued, “Looking at the [GI] Breeders' Cup Dirt Mile, it's a tricky race because it's around two turns. He's undefeated on one turn, but the mile distance seems perfect for him, so if I had to guess right now, that's where we'll end up. But I'll talk to the owners about it, enjoy this and of course observe the horse.”

A winner of the GI Hopeful S. over track-and-trip here last September before adding the GI Champagne S. at Belmont, Practical Joke finished a close second in the GII Blue Grass S. at Keeneland prior to finishing a credible fifth, beaten 9 1/2 lengths, in the GI Kentucky Derby. He returned with a sharp score in Belmont's GIII Dwyer S. at a one-turn mile and followed with a game third, beaten a half length, in the Jersey Shore centerpiece.

Practical Joke was the fourth most-expensive yearling by Into Mischief from 85 to sell in 2015 when offered at the Keeneland September Sale. The stakes-placed Halo Humor, a half-sister to Louisiana Futurity S. winner Cubera (Cape Canaveral), did not produce foals in 2015 or 2016 and was covered last year by Shanghai Bobby and Overanalyze. Halo Humor brought $130,000 from Whispering Oaks Farm at the 2008 KEEJAN sale.