Gerrymander A 50th GSW for Into Mischief in Mother Goose 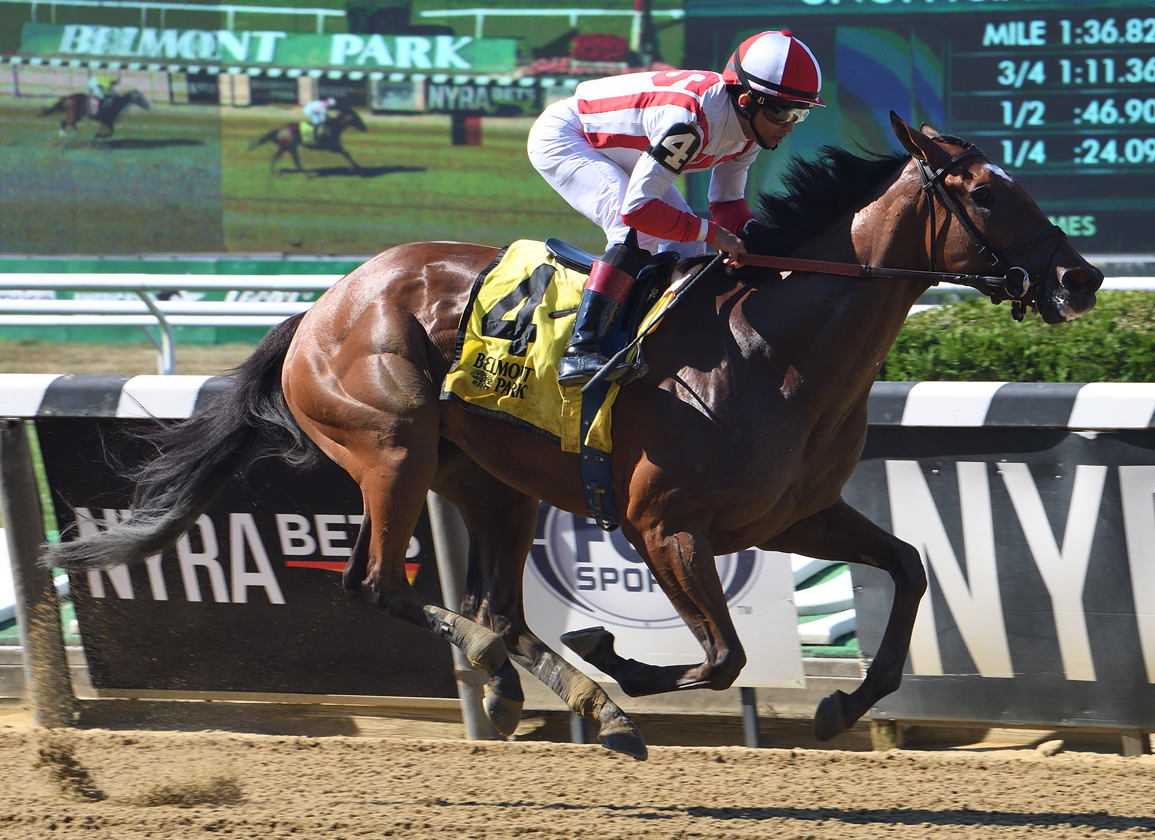 The 13-2 longest price on the board in a compact field of four, Klaravich Stables' Gerrymander (Into Mischief) sat a perfect inside trip and responded when push came to shove to comfortably take out Saturday's GII Mother Goose S. at Belmont Park, becoming the 50th winner at the graded level for her outstanding sire.

Quickly into stride for Joel Rosario, the $375,000 Keeneland September acquisition set the pace in advance of heavily favored Juju's Map (Liam's Map), but last year's GI Darley Alcibiades S. winner and GI Breeders' Cup Juvenile Fillies runner-up counterpunched and was in front after an opening quarter that was posted in an easy :24.09. 'TDN Rising Star' Shahama (Munnings), who had to pick herself up after a stumbling beginning, raced inside early, but was guided into the three path by Flavien Prat and the bald-faced May foal chased Juju's Map through four furlongs in :46.90. Shahama was asked to come after the front-runner in earnest and looked to be going the better of that duo as they raced into the final five-sixteenths of a mile, but Gerrymander was pushed off the inside to deliver her challenge three wide at the head of the stretch, pinched a break and ran out a facile winner. Juju's Map retreated tamely into third, ahead of Venti Valentine (Firing Line).

“She broke well and it looked like they didn't want the lead,” said Rosario, winning the Mother Goose for the third time in its last five runnings and second in succession. “So, I kind of went and they wanted it [the lead] down the backside a little bit, so I just had to be where I was. She handled everything fine and she was able to come into the last turn and get the jump. She seemed really comfortable and it worked out good. It set up well.”

Gerrymander belied odds of 10-1 to graduate at second asking at Saratoga last Aug. 29, then kept company with 'TDN Rising Star' and future champion Echo Zulu (Gun Runner) in this track's GI Frizette S. before finishing 7 1/4 lengths adrift in second. The bay went one better in the Nov. 5 Tempted S., defeating future GI Central Bank Ashland winner and recent GI Belmont S. runner-up Nest (Curlin) into third, and she was a troubled sixth behind last-out GI Acorn S. romper Matareya (Pioneerof the Nile) in the GII Eight Belles S. at Churchill May 6. According to trainer Chad Brown, the near-term objective for Gerrymander is the GI Alabama S. at Saratoga Aug. 20.

Kiki Courtelis's Town & County Farms teamed with Pollock Farms to acquire Ruby Lips–third in the 2012 Tempted when contested as a Grade III–for $180,000 at the 2014 Fasig-Tipton November Sale. Her first produce is Lone Rock, a multiple graded stakes-winning dirt marathoner, while Gerrymander's year-older full-sister Public Information was an allowance winner at Gulfstream Park June 19. Her homebred 2-year-old half-sister Sivako (More Than Ready) debuted this past Thursday at Churchill Downs.

Ruby Lips is a half-sister to Canadian Classic winner Like a Gem (Tactical Cat), herself the dam of three-time Grade I-winning turf mare Hard Not to Like (Hard Spun), SW Credit River (More Than Ready) and SP Time to Travel (Hard Spun). The mare foaled a Tapit filly in 2021 and a colt by Constitution this season after failing to meet her reserve at $725,000 at last year's FTKNOV sale.