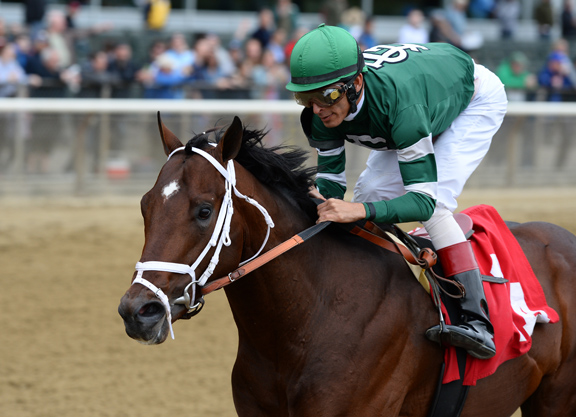 Able to Smile (Into Mischief) (hip 2509), a 4-year-old broodmare prospect, topped Sunday's seventh session of the Keeneland November Breeding Stock Sale when bringing a final bid of $135,000. I'll Need a Little Luck was the name on the ticket for the gray filly, who was consigned by Indian Creek. Out of Grade I placed Teamgeist (Arg) (Mutakddim), Able to Smile is a half-sister to multiple graded stakes winner House Rules (Distorted Humor), as well as to multiple Grade I placed Win the Space (Pulpit). A $385,000 Keeneland September yearling, Able to Smile won once in seven starts on the racetrack.

“Able To Smile was a beautiful broodmare prospect, she was very popular showing and we were hopeful she would be one of the top offerings on the day,” said Indian Creek's Sarah Sutherland. “She was a standout physically and on paper and would have held her own earlier in the sale as well. We are delighted with the sale.”

Able to Smile was one of two mares to bring six figures on the day. John Sikura's Hill 'n' Dale at Xalapa purchased the 6-year-old mare Stormy's Song (Unbridled's Song) (hip 2450) for $125,000. She is out of Stormy Tak (Stormy Atlantic), a daughter of multiple Grade I winner Lady Tak (Mutakddim).

The Army Mule partnership purchased Stormy's Song for $102,000 at the 2018 Keeneland November sale. She sold in foal to Army Mule and was followed into the sales ring Sunday by her weanling colt by that Hill 'n' Dale stallion, who was the session's top-priced foal when selling for $80,000 to Castleton Stables. The weanling was bred by Elevage II and St Elias Stables and both mare and foal were consigned by Hill 'n' Dale Sales Agency.

“The session was very good to us,” Sutherland said. “It felt similar to the second week of [Keeneland] September. I don't think you can expect fireworks, but you can sell horses very comfortably if you are fair and realistic.”

The November sale continues through Wednesday with sessions beginning daily at 10 a.m.