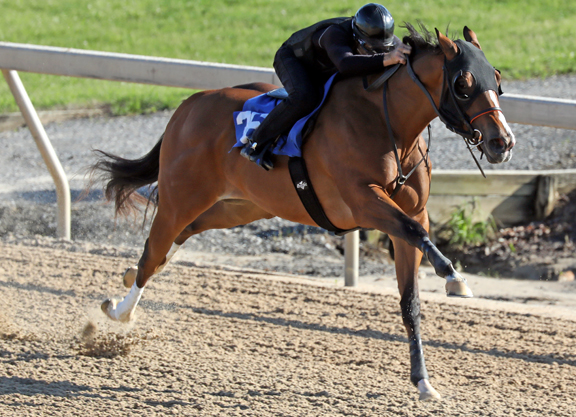 TIMONIUM, MD – The sun finally came out in Maryland and times picked up during the second session of the three-day under-tack preview of the Fasig-Tipton Midlantic 2-Year-Olds in Training Sale in Timonium Wednesday. A filly by Into Mischief (hip 360) turned in the fastest furlong work of the preview so far when she covered the distance in :10 flat. Consigned by Bobby Dodd, the bay juvenile is out of stakes placed Peggy Jane (Kafwain) and she was a $220,000 Keeneland September purchase by Brad Grady's Grand Oaks.

'She's a big, nice filly and she's fast,” said Dodd. “She has been showing me she could run the whole time and she showed up today. You never know what is going to happen up here, but I was hoping she would get a :10 flat. I knew she could go :10.”

Dodd's consignment sent out the only juvenile to work the furlong bullet in :10 flat during last year's Midlantic under-tack preview and that Union Rags colt, Tale of the Union, sold for $925,000 and was tabbed a 'TDN Rising Star' off a debut win at Del Mar last August.

Asked if Wednesday's bullet worker might match his colt from last year, Dodd said, “You never know what's going to happen, but she's a fast filly and she's by Into Mischief who is a hot sire. I am expecting something good.”

Six horses shared Wednesday's bullet quarter-mile breeze time. Top Line Sales, which sent out the fastest worker at the distance during Tuesday's first session of the preview, was first to hit the :21 3/5 mark with a colt by Into Mischief (hip 322). The juvenile is out of Nihilist (Latent Heat) and is a half to stakes winner Green Suede Shoes (Meadow Monster) and from the family of Grade I winner Ermine. He was purchased by Carlo Vaccarezza for $265,000 at last year's Fasig-Tipton Saratoga sale and RNA'd for $575,000 after working in :10 1/5 at the Fasig-Tipton Gulfstream sale in March.

“We were really happy with that work,” De Meric said. “We bought this fellow as a foal in Kentucky, so we know him really well, we raised him. He couldn't be a more straightforward, honest colt. He's been working really well at home, so I was very happy with his work today, but not surprised.”

“I've liked both of the two that I've had,” de Meric said of his limited experience with offspring of the multiple Grade I winner. “The colt that just breezed is not quite as fast as the first one, but he is a lovely mover. He's a little immature, he's a May foal, and the best is still ahead of him. And the one that breezed this morning, I just love.”

Tuesday's first session of the preview came after two days of heavy rain and the track seemed livelier under sunny skies and warmer temperatures Wednesday.

“It definitely has a little more life to it today,” De Meric agreed. “We had peanut-butter syndrome Tuesday, but nobody can help that. It's a product of the weather. They did a great job bringing the track back to a safe condition, but it wasn't flattering for a lot of the horses.”

Asked about the advantages of working horses the quarter-mile versus the furlong in Timonium, De Meric explained, “It's a little tricky from a logistical standpoint because that quarter pole comes at you very quickly and you've got to have your horse well-prepared mentally to be ready to break sharply pretty quickly after he gets on the racetrack. It is May and I think a lot of people are looking to see a little bit more from these young horses. For those that do need a little more time to mature and develop, it's a lovely date for us because it gives us that extra bit of time. I think for those that can, it's definitely an advantage to work a quarter, but I don't think the ones that work an eighth are penalized.”

All Dreams Equine sent out hip 334, a filly by Street Sense, to work the quarter in :21 3/5 during Wednesday's first set. The gray, a $15,000 Keeneland September Yearling purchase, is out of graded stakes winner Now I Know (Pure Prize). She RNA'd for $95,000 after working a furlong in :10 flat at the OBS March sale.

Of the track conditions, Elser added, “We've had good weather the last day and a half, but they have done a great job in the last two weeks keeping the track safe. It was safe yesterday and it's fast and safe today.”

Susan Montanye's SBM Training and Sales had the final quarter-mile bullet worker of the day, with Montanye in the irons for the :21 3/5 work of hip 364, a filly from the first crop of GI Belmont S. winner Palace Malice. Out of Perfectly Natural (Forestry), the youngster was a $130,000 Keeneland September yearling purchase.

“I bought her at Keeneland and I actually took her to the [OBS] March sale,” Montanye said of the filly. “She worked in :10 flat and vetted 100% clean, but we just didn't have the action on her. I wasn't going to give her away, she's too nice of a filly, and she can flat run. So I brought her up here and we've had no issues. We decided to work her a quarter to prove that there was no setback. We've just kicked on with her and she just rolled around this racetrack.”

Asked if the filly had changed much since the March sale, Montanye said, “The only thing I can say is that maybe she's gotten a little bigger and a little stronger. She was always a big and strong filly anyway, but she may be even bigger than she was in March.”

Montanye was happy with the track condition Wednesday.

“The track actually feels a little better today, it's not as loose,” she said.

The final session of the under-tack preview begins Thursday at 8 a.m. The Midlantic sale will be held next Monday and Tuesday at the Maryland State Fairgrounds with bidding beginning each day at 11 a.m.