Into Mischief Filly Passes the Test 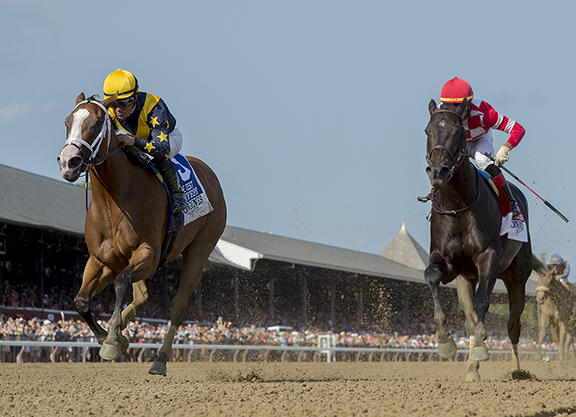 For several weeks, astute racing fans had tabbed Saturday’s GI Longines Test S. as one of the potential highlights of the Saratoga meeting. Often times, the bark is bigger than the bite, but this particular renewal lived up to the considerable hype, as Covfefe (Into Mischief) and GI Kentucky Oaks winner Serengeti Empress (Alternation) hooked up early on and never let the other out of their sights. At the conclusion of 71 seconds and change, Covfefe won the battle and the war, decisioning a very game Serengeti Empress by a hard-fought half-length.

Available at a seemingly chilly 5-1 for a good portion of the wagering, Covfefe firmed into 13-4 by post time and was part of the early mix outside of Serengeti Empress and to the inside of GII Princess Rooney S. runner-up Trenchtown Cat (Discreet Cat) before allowing the Oaks victrix to take up the running by her lonesome through an opening quarter in :22.19. Kept within striking distance passing the three-eighths marker, Joel Rosario gave Covfefe a squeeze leaving the quarter pole and the battle was joined in earnest as heads were turned for home. Covfefe fought her way to a slender advantage at the eighth pole, but Serengeti Empress would not go down without a fight inside, yielding only grudgingly in the final three or four strides. It was a chasm off to favored Bellafina (Quality Road), who was outrun early, improved her position through the middle stages and could not make significant inroads late. The final clocking was the fastest since Capote Belle (Capote) went 1:21.08 in 1996.

“Her last two works at Churchill were phenomenal,” said winning trainer Brad Cox. “I knew when we turned for home, we were going to get as good a Covfefe as we could get at this point of the year. I knew when she turned for home, she wasn’t going to give in today. If she was ever going to get seven-eighths, it was going to be today. She responded well and Joel [Rosario] gave her an excellent trip. To get a Grade I with her is huge. It was a super effort.”

Covfefe ran a hole in the wind on her Sept. 16 Churchill debut, winning off by 9 1/4 lengths, but she could not repeat the dose when no better than an odds-on fourth to future champion and GI Breeders’ Cup Juvenile Fillies winner Jaywalk (Cross Traffic) in the GI Frizette S. A Keeneland allowance winner first off a seven-month vacation Apr. 6, she thrashed Please Flatter Me (Flatter) by 8 1/2 lengths in the GIII Miss Preakness S. at Pimlico May 17, stopping the clock in track-record time of 1:07.70. Made the 2-5 chalk in the June 22 Roxelana S. at Churchill, she dueled throughout with GISW and last year’s GI Test S. runner-up Mia Mischief (Into Mischief), ultimately yielding late to be third.

Covfefe is the fifth Grade I winner for Into Mischief and continues an wildly successful Saratoga for the stallion, who has also accounted for GIII Schuylerville S. winner and ‘TDN Rising Star’ Comical, a pair of new ‘Rising Stars’ in Shoplifted and Risky Mischief and graded-placed efforts from ‘Rising Star’ Honest Mischief in the GII Amsterdam S. and from Sombeyay in the GII Hall of Fame S.

A close relative of Japanese MGSW & MG1SP Albiano, Covfefe is out of a half-sister to GISWs Acoma (Empire Maker) and Arch (Kris S.) and to the dam of recent GIII Cougar II H. hero Campaign (Curlin), among others. Third dam Althea was champion 2-year-old filly of 1983 and beat the boys in the GI Arkansas Derby the following season.

Antics is the dam of a yearling filly by Nyquist and foaled a colt by Violence this season.