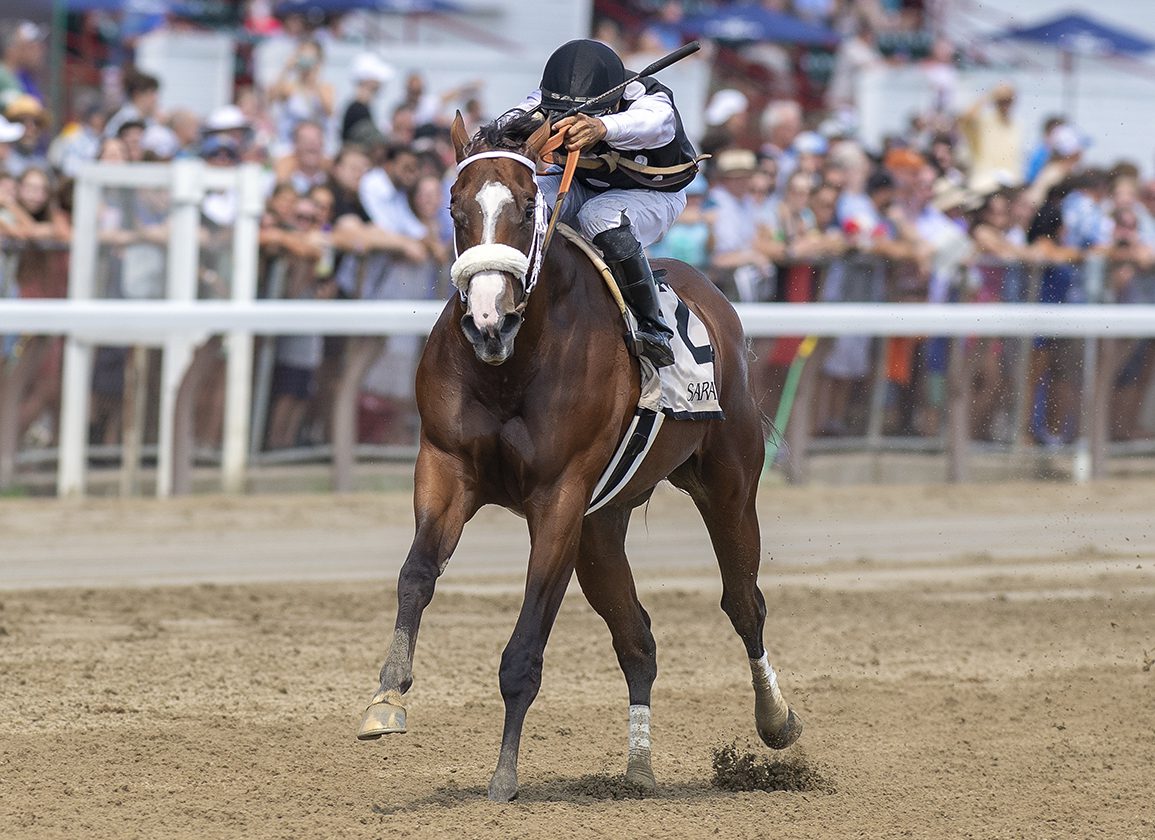 Holy Cow Stable's Naughty Gal (Into Mischief) certainly lived up to her name Sunday at Saratoga, as she took the GII Adirondack S. despite bearing out badly in the stretch. Bidding to increase legendary trainer D. Wayne Lukas's record wins in this race to seven, the 7-5 favorite broke well and tugged Luis Saez up to take a narrow lead through an opening quarter in :22.46. She started trying to get out midway along the bend, but remained several lengths clear as she posted a :46.15 half. Out in the middle of the track at the top of the lane, she re-rallied to fend off maiden Janis Joplin (California Chrome) and hit another gear late to prevail by 2 1/2 lengths in 1:18.97. Janis Joplin just held second from Sabra Tough (Cross Traffic).

“Pretty good trip. She broke from there pretty clean and took the lead, controlled the pace,” Saez said. “She was a little green. At the three-eighths, her ear was back and forth looking at something and [she] got a little lost, but she kept running and going. She gave me another gear and ran good.”

Fourth on debut at Churchill June 10 behind two other next-out graduates, Naughty Gal–a $350,000 OBS March acquisition off a :20 4/5 breeze–broke through by nine emphatic lengths back under the Twin Spires July 4. She was flattered when the runner-up from that heat came back to score a week ago.

“She's never been on this racetrack. It was her first time stepping foot on it,” noted 86-year-old Lukas. “She always would train on the Oklahoma track, so that's one thing. But I think what happened was [Luis Saez] didn't want to be down on the inside or on the rail. He said the rail is not the place to be. Looking at it and thinking about it, I think what happened [when she went wide in the turn] was he came off the turn and decided to go wide and suddenly figured he was a lot wider than he wanted to be. I think it probably made it worse than it was.”

This was the Hall of Famer's first graded stakes winner at Saratoga since Sporting Chance (Tiznow)–green himself in the stretch–took the 2017 GI Hopeful S. He won four straight Adirondacks from 1985 to 1988, but not since 2005 when scoring with eventual Eclipse winner Folklore.

“This one will probably go to Keeneland [for the GI Darley Alcibades S. Oct. 7] or the [Sept. 17 GIII] Pocahontas at Churchill Downs.”

He continued, “I thought I did a poor job with Summer Promise. I didn't have her tight enough and I underestimated how this track is. I think I got her beat, but we'll try to correct that in the [Sept. 4 GI] Spinaway. This one here [Naughty Gal], we pointed for and got a little smarter about what we were going to do. We put a couple of five-eighths [breezes] in her and it paid off.”

The first mention of Naughty Gal came in the pages of the TDN before she had ever even sold at auction. When breeder Loren Nichols sold an $875,000 Into Mischief colt at the 2020 Keeneland September sale (eventual maiden special weight winner So Determined), he said “I've got a real special [Into Mischief] filly at home who's going to be in the November sale. We're excited about that one–she's better than this one.”

While Naughty Gal “only” fetched $200,000 at Fasig-Tipton November, she clearly proved her breeder's high opinion of her right on Sunday.

Nichols bought stakes-winning dam Conway Two Step for just $11,000 at the 2013 OBS Winter Mixed Sale. The pedigree page grew fuller when a half to Conway Two Step produced MGISW Miss Temple City (Temple City) and her full-sister GSW Pricedtoperfection. A previous full-brother to Naughty Gal fetched $475,000 across the street as a yearling.

Naughty Gal becomes black-type winner 112 and graded winner number 52 for her incomparable sire, who was of course represented Saturday by three stakes winners including GI Whitney S. hero Life Is Good. She is the first graded winner and fourth stakes winner out of a mare by Spanish Steps, a full-brother to Unbridled's Song previously best known as the sire of 2012 GI Breeders' Cup Turf winner Little Mike.