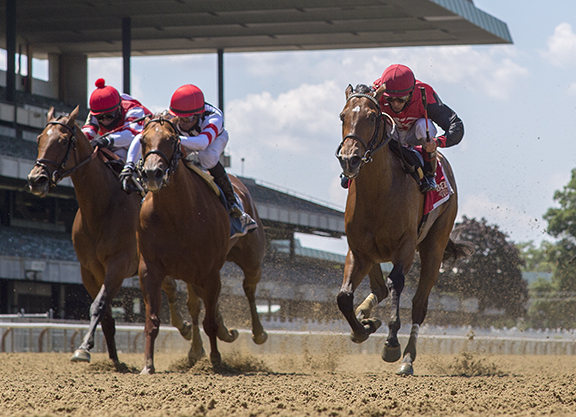 TDN Rising Star Frank’s Rockette (Into Mischief) wasn’t given the easiest of tasks in the early going of Saturday’s GIII Victory Ride S., but she showed her grit and class late with a hard-fought head score over the well-meant Reagan’s Edge (Competitive Edge).

Off a hair slow, the Bill Mott trainee raced out to take an early advantage from her inside draw and was closely attended by Reagan’s Edge, an allowance winner at Churchill in May, and Center Aisle (Into Mischief), a $1.5-million Fasig-Tipton Florida sale graduate who scored first out at Gulfstream in March before finishing fifth in a Churchill allowance May 22.

Pursued by those rivals through initial fractions of :23.11 and a half in :45.52, Frank’s Rockette maintained a comfortable edge turning for home, and while her two rivals gave it their best shot, the 2-5 favorite held on to post the narrow victory over Reagan’s Edge, with Center Aisle 3/4 of a length third. The final time of 1:14.47 was 0.01 off the track record for 6 1/2 furlongs.

“When you looked at the race on paper, it looked like we’d be the clear speed and probably be a length or two in front on the backside,” said trainer Bill Mott. “There was a horse hanging right with her. She didn’t break quite as sharp as I’ve seen her in the past, but she was able to open up a bit when she turned for home and had enough courage to hold them off. She had to work at it a little bit. It was not an easy win.”

Mott indicated the Aug. 8 GI Longines Test S. at Saratoga might be next.

“”That’s what I’ve had my eyes on,” Mott said of the Test. “It’s a big challenge. The Test is a great race. We’ve won it a couple of times and it’s a very important race for 3-year-old fillies. If she’s doing well, I’d like to give her a try in there.”

A runaway first-out winner at Churchill Downs last term, Frank’s Rockette recorded a pair of runner-up finishes at Saratoga behind Perfect Alibi (Sky Mesa) in the GII Adirondack S. in August and the GI Spinaway S. the following month before playing the bridesmaid once again, this time to Wicked Whisper (Liam’s Map), in the GI Frizette S. in October. An easy front-running seven-length winner in her sophomore debut in Gulfstream’s Any Limit S. Feb. 22, she was second to Kimari (Munnings) in Oaklawn’s Apr. 4 Purple Martin S. before returning to the winner’s circle following a May 25 optional claimer in Louisville.

With the win in the Victory Ride, Frank’s Rockette becomes the 30th graded stakes winner for Spendthrift marquee sire Into Mischief. Rocket Twentyone, a $300,000 OBS March purchase who evolved into the winner of the GIII Arlington-Washington Lassie S., is also responsible for the stakes-placed duo of Firewater Rocket (Macho Rocket) and Rocknroll Rocket (Curlin). This represents the family of 2-year-old champion filly and champion female sprinter Indian Blessing (Indian Charlie).

A half-sister to graded-placed Bear’s Conductor (Congaree), the 11-year-old mare hasn’t produced a foal of record over the past two seasons and was bred to American Pharoah earlier this spring.