Into Mischief Colt Sails to 'Rising Star'-dom at Belmont 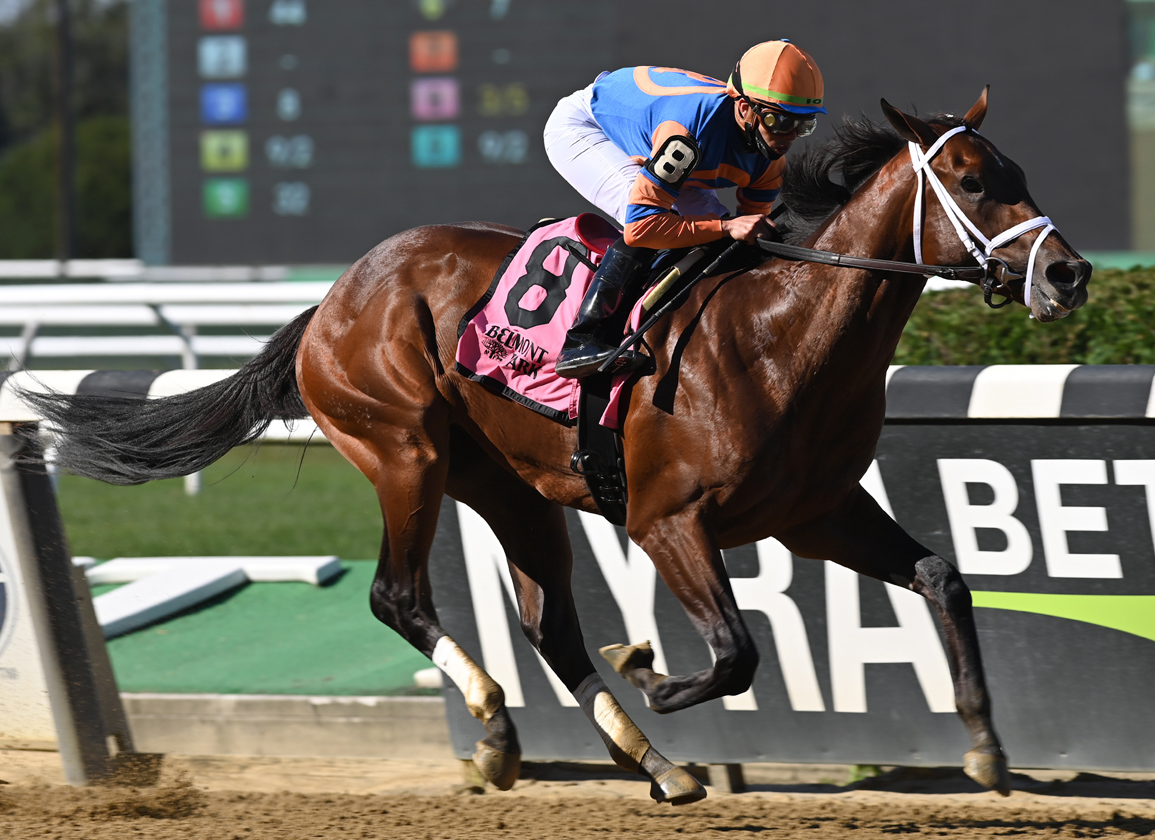 Overstep becomes the 27th 'Rising Star' for Into Mischief | Coglianese

Sent off at odds of 3-4 to open his account at first asking, Overstep (Into Mischief) turned on the afterburners through the Belmont stretch to become yet another 'TDN Rising Star' for his all-conquering stallion.

Drawn one from the outside in stall eight, the $360,000 Keeneland September yearling pressed the pace outside of 7-1 chance Silver Samurai (First Samurai), appearing to have that one whenever Irad Ortiz, Jr. elected to pull the trigger. On even terms with 2 1/2 furlongs left to run, Overstep was shaken up once heads were turned for home, immediately opened daylight on his rivals and went on to score by 6 3/4 lengths while being eased up for the final 70 yards. The outposted Asymmetric (Upstart) looked to brush the gate at the start and trailed for the opening half-mile, then finished willingly down the center of the track to secure place honors.

The 27th Rising Star for Into Mischief, Overstep is out of an unraced dam who topped the 2016 Fasig-Tipton Midlantic Sale on a bid of an even $1 million from owner Chester Broman. He and his wife Mary were represented Friday as breeders by 'Rising Star' Classy Edition (Classic Empire) in the Joseph A. Gimma S., while their operation has also been responsible for GIII With Anticipation S. winner Coinage (Tapit x Bar of Gold) as well as the maiden winner Adversity (Arrogate x Artemis Agrotera) over the past several weeks.

Modest Maven is a half-sister to GSP Lassofthemohicans (Indian Charlie), while third dam Big Dreams (Great Above) produced multiple champion sprinter Housebuster (Mt. Livermore) and GSW/GISP Quero Quero (Royal Academy). The latter is the dam of Glen Hill Farm's 2-year-old filly Muted (Into Mischief), who aired by 7 1/4 lengths on Gulfstream debut Sept. 3. The female family was developed by Clarkland Farm, also the breeder of Into Mischief. Modest Maven is the dam of a yearling Frosted colt, a filly of 2021 by that Darley America stallion and was most recently bred to Authentic.