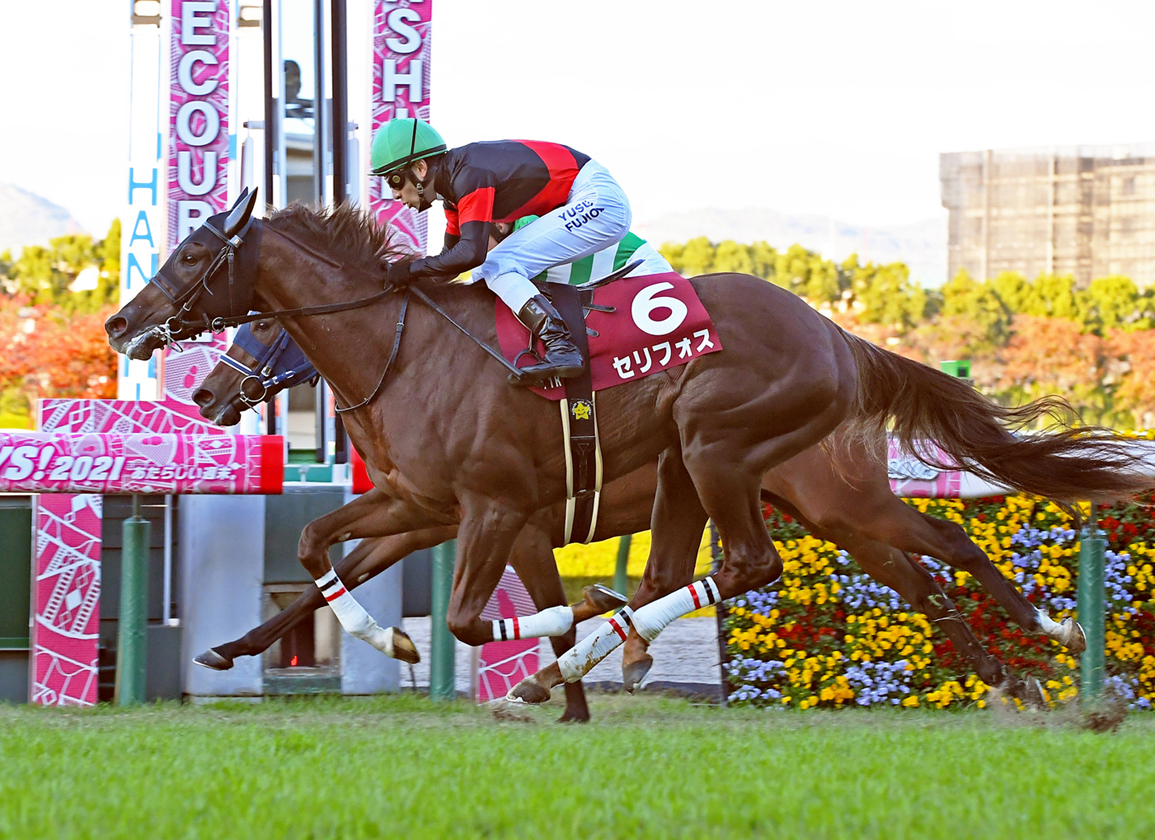 Narrowly leading the market for the G1 NHK Mile Cup at Tokyo on Sunday is 4-1 shot Serifos (Jpn) (Daiwa Major {Jpn}). A winner of the G3 Niigata Nisai S. and G2 Daily Hai Nisai S. at two, the relative of GI Pacific Classic hero Go Between (Point Given) lost his unbeaten tag when second in the G1 Asahi Hai Futurity S. to Do Deuce (Jpn) (Heart's Cry {Jpn}) last December and makes his 3-year-old bow in this competitive contest from stall four.

“He ran solo in his last piece of work on the woodchip course over five furlongs, but he went quickly,” said trainer Mitsumasa Nakauchida of the G1 Racing Company runner. “He looks good, and I can see the difference from when he was a 2-year-old. I think the distance of the race will be fine for him, and racing left-handed at Tokyo shouldn't be a problem either.”

Third in that feature was Danox Company Ltd.'s Danon Scorpion (Jpn) (Lord Kanaloa {Jpn}). Successful in the G3 Arlington Cup at Hanshin in April, the colt is a son of Canadian Horse of the Year and three-time Classic victress Lexie Lou (Sligo Bay {Ire}), a $1-million purchase by K I Farm out of the 2016 Keeneland November Breeding Stock Sale.

Conditioner Yakayuki Yasuda said, “He is in good condition, and he's like Lord Kanaloa in the way that he races in a relaxed way. He is looking well in his coat, and hopefully things will go smoothly now right up to the race. A mile is probably his best distance, so I think he can run well.”

Lending strong American flavour to Sunday's event is American-bred transplant Jean Gros (More Than Ready), who hit a career high with an Apr. 9 defeat of Group 3 winner Matenro Orion (Jpn) (Daiwa Major {Jpn}) in the G2 New Zealand Trophy S. over this trip at Nakayama. A full-brother to dual graded winner Tom's Ready (More Than Ready) who was also third in the GI Forego S., the Susumu Fujita silksbearer was a $130,000 Keeneland September RNA turned $265,000 OBSMAR 2-year-old acquisition by Hideyuki Mori after breezing a furlong in :10 flat. Mori and Take combined to win the 1997 edition of this race with Seeking the Pearl (Seeking the Gold), who would also strike in the G1 Prix Maurice de Gheest one year later. Jean Gros and his veteran reinsman exit lucky gate 13.

Mori said, “He is developing well, and although quite a small horse, he is getting bigger gradually. If another horse doesn't want to make the running, I think he's capable of going forward and making his own pace.”

One of five members of the fairer sex signed on, Sonnet Phrase (Jpn) (Epiphaneia {Jpn}) is extremely light on starts, but after breaking her maiden at Niigata in August, she did finish second to Serifos in the Daily Hai Nisai S. in November. The Carrot Farm runner would be the first filly or mare to take this race since Aerolithe (Jpn) (Kurofune) in 2017 and she leaves from stall two.

Said trainer Takahisa Tezuka, “The Tokyo mile should suit her, and there's no reason why she can't do well with the ability she has. The pace should be strong this time, and it'll be a full field of eighteen horses, but unless we try, we won't know. I would like her to show her potential here.”