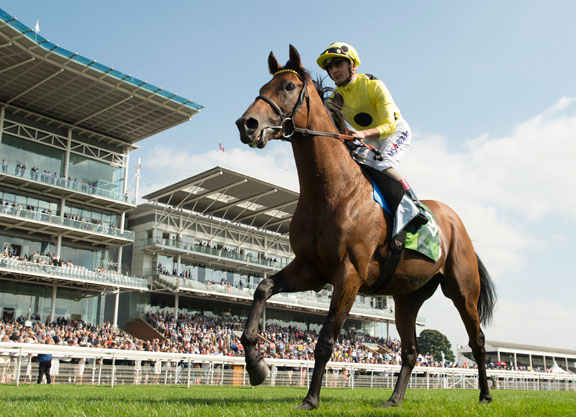 Banishing the disappointment of missing the G1 King George VI and Queen Elizabeth S. due to an infection, Sheikh Mohammed Obaid Al Maktoum's Postponed (Ire) (Dubawi {Ire}) made light of a drop back to an extended 10-furlong trip on Wednesday to master his rivals in the G1 Juddmonte International at York. While his prowess over a mile and a half was already firmly established following his emphatic wins in the Mar. 26 G1 Dubai Sheema Classic and June 4 G1 Coronation Cup, the increasingly-predominant European presence still had a question to answer here which became more vexing as the race approached and his starting price drifted to 15-8. In the event, the favourite displayed all the speed connections were convinced he possessed and forged ahead as soon as Andrea Atzeni committed with 2 1/2 furlongs remaining. Despite edging right on to the stand's rail, the bay was always doing enough to keep by Highland Reel (Ire) (Galileo {Ire}) at bay and prevail by 1 1/4 lengths. “People had a lot of doubts about him, but I never had nor did Roger [Varian] or Sheikh Obaid–he's got too much class,” his rider commented. “I think he's been under-rated a lot, as he could be one of the best middle-distance horses we've seen for a while.”

The Postponed that battled to success by the narrowest margin over Eagle Top (GB) (Pivotal {GB}) in last year's G1 King George VI and Queen Elizabeth S. was merely a work in progress at the time and a labour of love that Luca Cumani had long been occupied with. The master of Bedford House Stables had seen this coming a way off, refusing to be drawn into a St Leger bid that may not have suited the still-immature but clearly very talented colt after he had spreadeagled a field containing the classy Snow Sky (GB) (Nayef) in the G2 Great Voltigeur S. on this card two years ago. Instead, he was put away for his 4-year-old campaign which steadily gained lift-off with a second in the G3 Gordon Richards S. over 10 furlongs at Sandown in April and third placings in The Curragh's G1 Tattersalls Gold Cup over an extra half-furlong in May and the G2 Hardwicke S. at this trip at Royal Ascot in June. His high-profile exit from his stable after winning the G2 Prix Foy at Longchamp in September and avoidance of a tough encounter in the Arc proved to Roger Varian's benefit as he took charge of an already experience-hardened performer ready to meet any demand.

His debut for his new stable resulted in a three-length dismissal of the eventual G1 Prix Ganay winner Dariyan (Fr) (Shamardal) in Meydan's 12-furlong G2 Dubai City of Gold Mar. 5 and if that was a significant performance in its own right it only acted as a precursor to his dismantling of the Japanese heavyweights Duramente (Jpn) (King Kamehameha {Jpn}) and Last Impact (Jpn) (Deep Impact {Jpn}) and Highland Reel in the G1 Dubai Sheema Classic over the same course and distance three weeks later. By the time he lined up for the G1 Coronation Cup on Derby day June 4, Postponed was gaining formidable momentum which went totally unchecked as he dealt a 4 1/2-length beating to the solid benchmark Found (Ire) (Galileo {Ire}).

Postponed's loss was Highland Reel's gain in the King George and it was significant that the pair raced close up behind the former's pacemaker King Bolete (Ire) (Cape Cross {Ire}) throughout the early stages. Despite the exacting tempo which eventually saw the runners spread back down the Knavesmire, only Arab Spring (Ire) (Monsun {Ger}) of those prominently-placed initially dropped out of contention in the straight suggesting those who were held up lacked the requisite class for this particular renewal. Whatever the pace of the race, it is now fact that Postponed and Highland Reel are two smooth-travelling top-notchers and they duly had it between them from the top of the straight, with only the big improver Mutakayyef (GB) (Sea the Stars {Ire}) briefly threatening towards the stand's side. Postponed took that rival's ground as he lugged towards the fence in the latter stages, but the presence of Shadwell's G2 Summer Mile winner only served to fire his competitive nature.

Roger Varian is well aware of what he has in the winner and was able to look beyond his current stable troubles to carve the winner's return to action. “He turned the corner two weeks ago and in the last seven days he looks to have blossomed,” he explained. “A week ago I wouldn't have known if I was running him here and we're not having loads of winner at the moment so you're never quite sure. I trusted in the horse's condition and he delivered. I think it will be two or three weeks yet before we hit full stride, but come September we'll be ready to roll.” Postponed is on target for a tilt at the G1 Prix de l'Arc de Triomphe at Chantilly Oct. 2, according to Varian. “I'll talk through plans with his owner, but I would think it unlikely he'll run again before the Arc–it will give us plenty of time to tune him in for that race. The team at home have done a fantastic job and he's a remarkable horse who I'm very lucky to have. Sheikh Mohammed Obaid is a terrific sportsman and he hinted he might stay in training, but a concrete decision won't be made until later in the year. Let's cross one bridge at a time and see where we are in the autumn. I'm not sure this is as spectacular as some of his wins, but I thought he stamped himself as by far the best horse in the race.”

Aidan O'Brien was delighted with the effort of Highland Reel, who could be sent overseas again. “That was a very good run. He's still progressing, this horse,” he said. “He's physically getting stronger and I'm delighted with him. I'd say he'll travel plenty, he loves it. He's in all the Australian races, but he could go somewhere before that. Timing-wise, I'd say the [G1] Irish Champion [S. at Leopardstown Sept. 10] could be the one, but there's also a race in America, the [GI] Sword Dancer [at Saratoga] that he could run in. He's a proper fast-ground horse, but he also handles soft, so he's versatile and he's as good over 10 or 12 furlongs. We've got lots of options with him.”

Mutakayyef fully justified trainer William Haggas's long-held belief in him and connections's decision to run him back over this trip. “I thought he was going to win, Paul [Hanagan] said he just ran out of room,” Haggas said. “The winner started his run down the middle, but ended up near us on the near side. I would have just liked them all to run in a straight line so we could have known. He got the trip, but we knew he would as he's won over it before. He's come of age this season, I'm chuffed to bits with him. The only race we have in mind for him is the [G1] Dubai Turf at Meydan next March–that's what the owner wants to go for and it will suit him down to the ground. Obviously, he'll run before, but where I don't know.”

Postponed may have picked up his speed from his second dam Bianca Nera (GB), who was a sharp juvenile for David Loder and won the G1 Moyglare Stud S. and G2 Lowther S. She is a half to the Moyglare runner-up Hotelgenie Dot Com (GB) (Selkirk) who produced the listed-placed Pietra Dura (GB) (Cadeaux Genereux {GB}), dam of the GIII Beverly Hills H. winner and GI Yellow Ribbon S. runner-up Turning Top (Ire) (Pivotal {GB}). Hotelgenie Dot Com produced another fast type in the G1 Fillies' Mile and G1 Falmouth S. heroine Simply Perfect (GB) (Danehill), who interestingly went on to throw a middle-distance performer in the G3 International S. winner Mekong River (Ire) (Galileo {Ire}). Simply Perfect's sister One Moment In Time (Ire) is the dam of another Galileo who went even further in last year's G1 St Leger demotee Bondi Beach (Ire), also the winner of the G3 Curragh Cup and G3 Vintage Crop S. From the family of the G3 Jersey S. hero and G1 Irish 2000 Guineas runner-up and G1 Middle Park S. third Gale Force Ten (GB) (Oasis Dream {GB}), Ever Rigg has a 2-year-old daughter of Nathaniel {Ire}) named God Given (GB), a yearling colt by Makfi (GB) and a foal full-brother to Postponed.