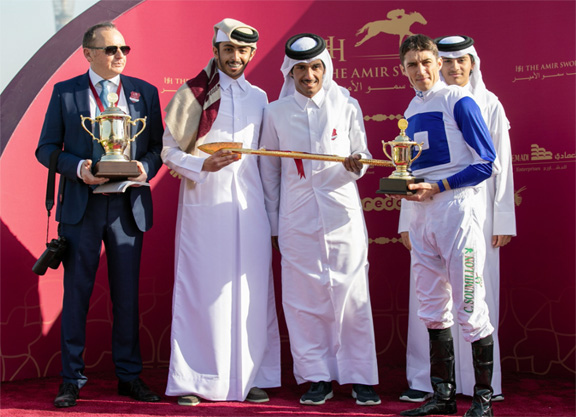 Intellogent is one of five French entries for the race along with Royal Julius (Ire) (Royal Applause {GB}), another globetrotter who will be making his third consecutive appearance in Doha for Jerome Reynier, having finished runner-up in the HH The Amir Trophy in 2019 and fifth last year. Last season's St Leger runner-up Berkshire Rocco (GB) (Sir Percy {GB}) has also been given an entry for the mile-and-a-half contest by trainer Andrew Balding, who also has King Power Racing's six-time winner Johnny Drama (Ire) (Lilbourne Lad {Ire}) entered.

The 5-year-old Felix (GB) (Lope De Vega {Ire}) has won four or his five starts since joining Marco Botti's stable and he is another with a Trophy entry along with his Newmarket neighbour, Red Verdon (Lemon Drop Kid), who has now won nine of his 41 starts for Ed Dunlop and the Hon. Ronnie Arculli.

Among the local entries for the domestic Group 1 contest is a Qatari favourite, The Blue Eye (GB). Now nine, the son of Dubawi (Ire) has won 20 of his 37 races at Al Rayyan and has contested the last five runnings of HH The Amir Trophy, winning in partnership with Harry Bentley in 2016 and 2018.

With a total prize fund of $4.34 million (£3.26 million), the three-day festival features five international races on Saturday, Feb. 20—three for Thoroughbreds and two for purebred Arabians—with the Thoroughbred turf races completed by the six-furlong Breeders' Cup-sponsored Dukhan Sprint and the Al Biddah Mile for 3-year-olds.

The international contest on the Friday of the festival is the $200,000 Irish Thoroughbred Marketing Cup, run over a mile for 4-year-olds and up with an entry list of 59 horses from seven different countries. Ireland's Adrian McGuinness trains three of the entries, led by the 7-year-old Saltonstall (GB) (Pivotal {GB}), who has won his three most recent starts, including the listed Glencairn S. at Naas. Frederic Rossi, who had a breakthrough season in 2020 with Group 1 winners Dream And Do (Ire) and Sealiway (Fr), has entered the consistent Kenway (Fr) (Kendargent {Fr}), whose five wins include victory over subsequent Group 1 winner Wooded (Fr) in the G3 Prix la Rochette.

The six international races have attracted 29 horses from Britain, 23 from France, 15 from Oman, three from Ireland, two from Bahrain, and one each from Spain, Saudi Arabia and the United Arab Emirates.