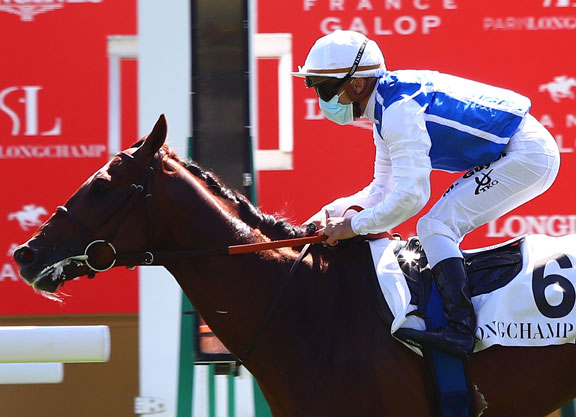 Serving notice that he was above average when winning the Listed Grand Criterium de Bordeaux in October, the Wertheimers' Pao Alto (Fr) (Intello {Ger}) boosted his stock when powering to an authoritative success in Thursday's G3 Prix la Force at ParisLongchamp. Settled fourth early by Maxime Guyon, the 12-5 favourite rushed to the front passing the two-furlong pole en route to a comfortable 1 1/2-length success from TDN Rising Star Ocean Atlantique (American Pharoah), with Chachnak (Fr) (Kingman {GB}) three lengths away in third. “He was ready for this–he had plenty of work behind him and he was impressive,” trainer Christophe Ferland said. “He could sweat up last year, but was nice and cool before the race today and stretched out very well. He will either run in the G3 Prix de Guiche or G2 Prix Greffulhe before the G1 Prix du Jockey Club and the extra distance won't be a problem.”

Introduced over 7 1/2 furlongs at the Deauville August meeting, Pao Alto was runner-up to fellow Wertheimer representative Hopeful (Fr) (Motivator {GB}) and that form was franked as the winner went on to have Monday's G3 Prix de Fontainebleau scorer The Summit  (Fr) (Wootton Bassett {GB}) back in third in the G3 Prix de Conde later that season. Off the mark next time over a mile here in September, the chestnut went on to secure a 4 1/2-length success in the Grand Criterium de Bordeaux at Bordeaux-le-Bouscat before missing bigger targets due to sickness.

With last year's G1 Criterium de Saint-Cloud hero Mkfancy (Fr) (Makfi {GB}) flopping here and TDN Rising Star Another Sky (Fr) (Le Havre {Ire}) running his race before the furlong pole, the form does have holes in but Ocean Atlantique is held in high regard by Andre Fabre and Chachnak had been less than six lengths off Victor Ludorum (GB) (Shamardal) when sixth in the G1 Prix Jean-Luc Lagardere. The time effort of the winner marks him out as having real potential for providing the operation with another Jockey-Club which the sire took for them in 2013. Purchased at the Arqana Deauville August Yearling Sale for €160,000, Pao Alto is a son of the G3 Fahrhofer Stutenpreis winner Peaceful Love (Ger) (Dashing Blade {GB}), whose prior black-type performer was the G3 Zukunfts-Rennen third Fort Hastings (Ire) (Aragorn {Ire}).

Peaceful Love is a half to three other black-type runners headed by the dual group 3 winner Peace Royale (Ger) (Sholokhov {Ire}), who is herself the dam of two black-type scorers including Peace in Motion (Hat Trick {Jpn}) who captured the G3 Grosser Preis der Landeshauptstadt Dusseldorf and was second in the G2 German 1000 Guineas. Another of Peaceful Love's half-siblings is Phiz (Ger), by Intello's sire Galileo (Ire), and she was runner-up in the G2 Park Hill S. Pao Alto's 2-year-old half-sister Happy Lane (Fr) (Wootton Bassett {GB}) was a €190,000 Arqana August purchase by the Broadhurst Agency, while he also has a yearling half-sister by Shalaa (Ire).