Home » Archive » Top News » Instilled Regard Retired to Taylor Made

Instilled Regard Retired to Taylor Made 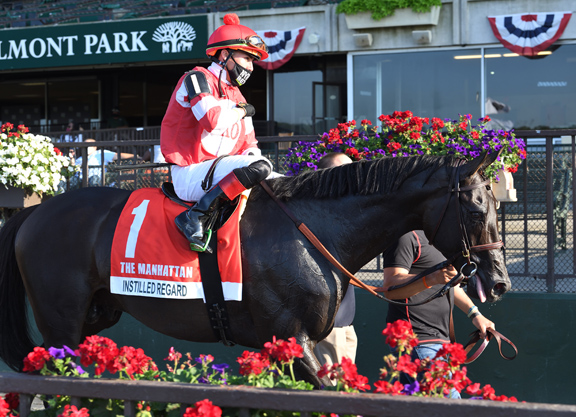 Grade I winner Instilled Regard (Arch–Enhancing, by Forestry) has been retired from racing and will take up stud duties at Taylor Made. The 5-year-old will stand for a fee of $12,500 S&N for the 2021 season.

Bred by KatieRich Farms, Instilled Regard RNA'd for $110,000 at Keeneland September, but brought $1.05 million from Larry Best's OXO Equine at the OBS March Sale. Turned over to Jerry Hollendorfer, he began his career on dirt, finishing second in the 2017 GI Los Alamitos Cash Call Futurity S. and captured the 2018 GIII Lecomte S. Fourth in the GII Risen Star S. that term, the dark bay filled the same spot behind eventual Triple Crown hero Justify (Scat Daddy) in both the GI Santa Anita Derby and GI Kentucky Derby.

Transferred to Chad Brown, Instilled Regard was off the board in the GI Pennsylvania Derby, after which he was switched to turf, finishing third in the GI Hollywood Derby. Winless in his first three starts of 2019, he finished off the season with a victory in the GII Fort Lauderdale S. Third in the GI Pegasus World Cup Turf Invitational S. in January, the OXO Equine colorbearer was off the board in the GII Mervin Muniz Memorial S. Mar. 21, but closed out his career with victories in the June 6 GII Fort Marcy S. and July 4 GI Manhattan S. Instilled Regard retires with a record of 18-5-3-4 and earnings of $983,240.

This story was posted in Top News and tagged Arch, Instilled Regard, Larry Best, OXO Equine, stallion, Taylor Made Farm.