Instagrand Retired to Taylor Made Stallions 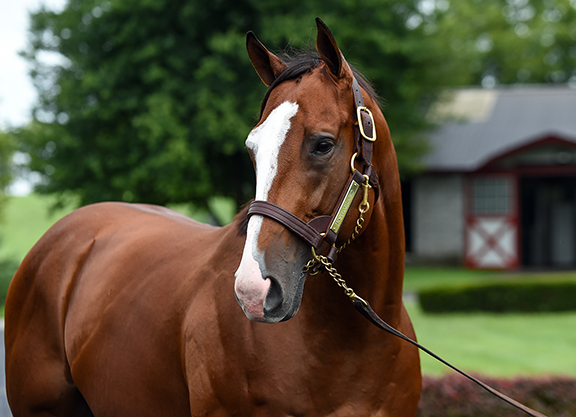 Instagrand (Into Mischief–Assets of War, by Lawyer Ron), a 'TDN Rising Star' and blowout winner of the GII Best Pal S. in 2018, has been retired to Taylor Made Stallions for the 2021 breeding season. He will stand for a fee of $7,500.

Instagrand earned his 'Rising Star' after graduating by 10 lengths at first asking at Los Alamitos, covering five furlongs in a swift :56 flat, before validating that performance with a 10 1/4-length romp in the Best Pal. At three, he finished third off a seven-month absence in the one-mile GIII Gotham S. at Aqueduct before filling the same spot when trying two turns for the first time in the GI Santa Anita Derby.

Bred in Kentucky by Stoneway Farm, Instagrand was purchased for $190,000 at the 2017 Fasig-Tipton July Sale and was knocked down to Larry Best's OXO Equine for joint sales-topping $1.2 million after breezing :10 flat at the 2018 Fasig-Tipton Gulfstream Sale.

Instagrand is out of a winning daughter of GSW Added Asset (Lord At War {Arg}), a half-sister to Grade II winner Added Gold (Gilded Time) and from the family of GI Spinaway S. victress Irish Smoke (Smoke Glacken). Like Into Mischief's dual champion Covfefe, Instagrand–one of 78 black-type winners and 32 graded winners for his enormously successful sire–carries Danzig on the bottom side of his pedigree.

Instagrand is currently available for inspection at Taylor Made.