Inside the Winner's Circle: Collected 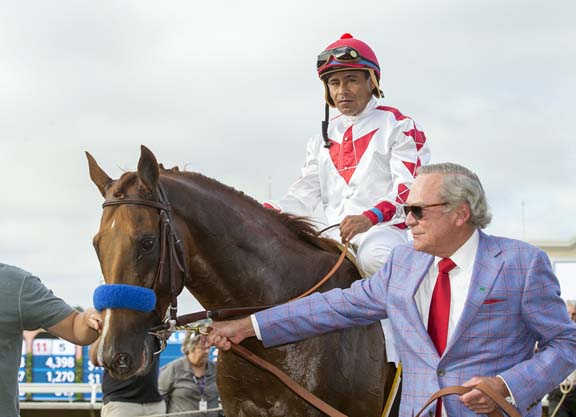 When Collected (City Zip) gamely held off the late-rushing heavy favorite Arrogate (Unbridled's Song) in last Saturday's GI TVG Pacific Classic, it was the culmination of three generations of work for the team at the historic Runnymede Farm, itself the product of four generations of the Clay family.

“Everyday, you dream of having a shot at winning a Grade I,” said Runnymede's vice president and general manager Romain Malhouitre. “We knew he was doing quite well, but you never know if you are doing well enough to beat a horse like Arrogate. That was the big question. Arrogate was question number one and the distance was question number two. So those were the big obstacles. It sounded like he really liked the track and he was training very well. But there is a difference between a Grade III and a Grade I and there is a difference between Arrogate and the rest of the horses.”

Collected, sold by Runnymede for $150,000 at the 2014 Keeneland September Yearling Sale, came into the Pacific Classic off a string of three straight victories, including a 14-length romp in the June 24 GIII Precisionist S.

Stretching out to 1 1/4 miles at Del Mar Saturday, the handsome chestnut skipped clear of G1 Dubai World Cup winner Arrogate at the top of the lane and then was all out to just hold off his famous stablemate by a half-length.

Watching the race on TV from Kentucky, Malhouitre had only one thought as the horses thundered down the lane.

“Where is the wire–that was pretty much it,” he laughed.

“Where is the wire, where is the wire? He opened up and looked pretty good and then we saw Arrogate putting his head down and we know what he does when he does that. We were just looking for the wire, to be honest.”

Runnymede Farm, then under the direction of general manager Martin O'Dowd, purchased the mare Josette (Ire) (Danehill), in foal to Johannesburg, for $300,000 at the 2005 Keeneland November Sale. That Johannesburg foal would become Helena Bay (GB), whose third foal is Collected.

“I feel like it really was what Runnymede is all about,” Malhouitre said of the addition of Josette to the farm's select broodmare band. “If you look deep down, what Runnymede has done over the years is to look for big, deep pedigrees with a big foundation family and make sure that you have plenty of broodmare sire power on the top. If you look at Josette, she was a Danehill mare and we know the impact that Danehill has had on the Thoroughbred breeding in Europe, in Australia, in Japan and here in America. So I think the biggest appeal for Martin was that she was by Danehill and from the family of Blushing Groom–Blushing Groom has been another important figure in the breeding industry. It really made a lot of sense, I think, for Martin to buy her. And knowing Josette myself, she was a gorgeous mare as well. When you look back, it fits really with what we are doing, buying into good families with broodmare sire power.”

Collected impressed the team at Runnymede from the beginning, according to Malhouitre.

“The mare is a nice, compact Johannesburg mare, she really looks like Hennessy,” Malhouitre said. “I've seen four foals out of her now and they come in bigger and stronger packages than her, but she is very athletic herself and I think that Collected has gotten that from her. Collected has always been quite athletic and he really matured into quite a good horse, both mentally and physically, during the sales prep.”

Runnymede will be offering another son of Helena Bay at the upcoming Keeneland September sale in hip 314, a colt by Lookin at Lucky.

“He is made a little differently than Collected, but he has some similarities as well, especially the front end,” Malhouitre said of the yearling. “But the athleticism is there and the confidence, as well. He's a horse who, every time we ask something new, he answers right away and he understands what we are asking him to do. Those are the similarities that I see between both, that ability to learn very quickly and be forward about it and to have confidence in themselves. And they are both very good movers. Collected was a great mover when he was on the farm and this one, he is actually just walking in front of me right now, and he is just a very good mover.”

Helena Bay has a weanling colt by Hard Spun and was bred back to Triple Crown hero American Pharoah.

“Like everybody else, we loved American Pharoah and we wanted to support him the last two years,” Malhouitre said. “So we sent some very nice mares to him. We sent the dam of Lady Eli to American Pharoah and she has a very nice filly by him and she is in foal to him again. We knew very early that Collected was going to become a good horse, we followed him at last year's Preakness and he was on the shelf after that, but we were hoping that he would come back the right way. And it was a good match physically and on pedigree, as well. It was just natural for us to go over there. We have been very encouraged–we have three American Pharoahs here on the farm and the three of them are all very good-looking horses.”

While functioning as a commercial breeding operation, Runnymede is still able to maintain generations-long involvement in its standout families. The farm sold Josette at the 2015 Keeneland November sale, but currently has three of her daughters in its broodmare band. In addition to Helena Bay, the band also includes Cinnamon Lass (Conduit {Ire}) and Koala Queen (Lonhro {Aus}).

“Koala Queen was a very good 2-year-old and won the first two races of her career–she was very precocious and fast,” Malhouitre said. “We have her, she is in foal to Quality Road. And we sold Cinnamon Lass, but now we've bought her back and she has a nice City Zip filly on the ground and she is in foal to Air Force Blue.”

Malhouitre continued, “At the end of the day, we are a small farm and we have to rely on cash flow. So the best thing to do is put everything on the market and see how it goes. If you look at Collected, this is the third generation, if you look at Lady Eli, this is the third generation. So we have to sell everything, but we are also able to cultivate families.”