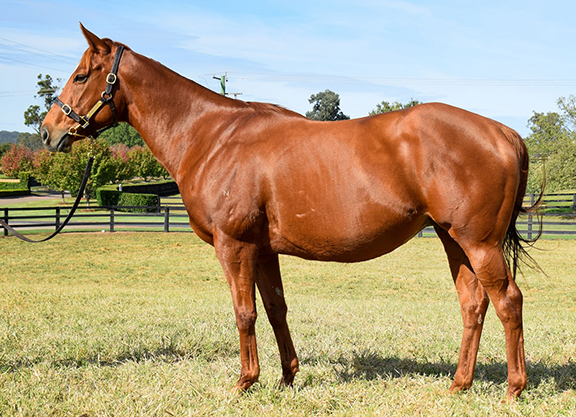 In Tuesday’s TDN, William Inglis Co.’s General Manager of Bloodstock Sales and Marketing Sebastian Hutch reflected on the results of the company’s very successful Australian Easter Yearling Sale last month and took a look ahead at this Friday’s Chairman’s Sale, in which bloodstock professionals from all corners of the globe will have the opportunity to buy into some accomplished bloodstock.

Amongst the 90 lots cataloged to the sale, to be conducted digitally, are pedigrees featuring runners familiar to an American audience, as well as several with European connections. To follow are brief pedigree notes on five mares in foal to some prominent and well-performed Australian sires.

Winner in Ireland of the G3 Coolmore Stud Fillies’ Sprint at two and the G3 Ballyogan S. the following season while under the care of Jim Bolger, Radharcnafarriage is related to four stakes horses, including the stakes-winning Alienated (Gone West), dam of SW & GI Woodward S. runner-up Rally Cry (Uncle Mo) and the dual Grade I-placed Alienation (Rock Hard Ten). The 12-year-old mare is the dam of the stakes-placed So Serene (Aus) (Exceed and Excel {Aus}), an A$650,000 Easter yearling in 2015 who fetched A$540,000 in foal to Sebring (Aus) at last year’s Chairman’s Sale; and California Rad (Aus) (Fastnet Rock {Aus}), who won on his Class 3 debut Wednesday at Happy Valley in Hong Kong (video). Radharcnafarraige is offered in foal to Exceed and Excel.

Bred by Barouche Stud, Collection Privee was a 300,000gns Tattersalls October yearling and placed in three French appearances for Nicolas Clement before being acquired by McKeever Bloodstock for €35,000 at Arqana December in 2018. Pregnant for her first foal to the now-retired Not A Single Doubt (Aus), Collection Privee’s dam is a full-sister to leading sire Tapit, MSP Overandabeauty (Grand Slam) and to the dam of MGSW Madefromlucky (Lookin At Lucky). This is also the family of champions Rubiano and Summer Bird.

A half-sister to the stakes-placed Anna Sophia (Oasis Dream {GB}) and to the dam of 2018 GI Malibu S. runner-up Identity Politics (Into Mischief), this former Siena Farms-bred/Tom Amoss-trained runner hails from the female family of European champion and G1 Investec Derby-winning sire New Approach (Ire) and G1 Investec Oaks heroine Was (Ire) (Galileo {Ire}). She is offered in foal to Medaglia d’Oro, meaning the resulting produce will be bred like Grade I winners Rock Fall and Competitionofideas.

Racing in the colors of Marc and Vinka Ferrell and trained by Peter Eurton, Madame Cactus posted her most important career victory in the 2013 GII Lexus Raven Run S. at Keeneland. Purchased by SF Bloodstock for $400,000 in foal to Uncle Mo at the 2017 Keeneland November sale, the chestnut–from the family of champion Chief’s Crown–sells in foal to former ‘TDN Rising Star’, G1 Longines Golden Slipper hero and champion 2-year-old Capitalist (Aus) (Written Tycoon {Aus}).

Third in Keeneland’s GIII Jessamine S. at two and placed in that track’s GIII Appalachian S. and GII Lake George S. at three while under the care of Hall of Famer Jonathan Sheppard, Outsider Art hails from the extended female family of champion Suave Dancer and the outstanding Hartnell (GB) (Authorized {Ire}), a Group 3 winner in England and a Group 1 winner in Australia at seven, eight, 10 and 12 furlongs. He was also third in a G1 Melbourne Cup over two miles. Outsider Art is also in foal to Capitalist (Aus).