In Their Footsteps: Lynn Hancock 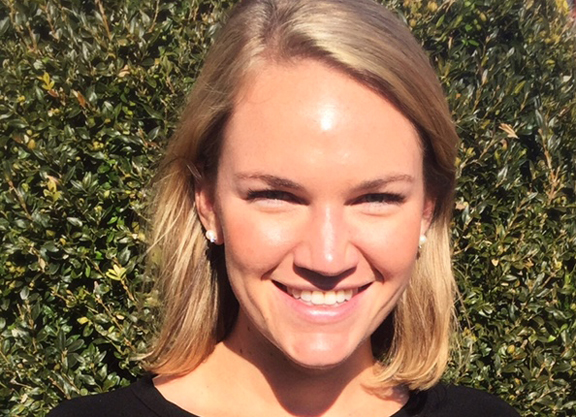 Daughter of Arthur Boyd Hancock III, master of Stone Farm, and granddaughter of Claiborne Farm's Arthur “Bull” Hancock Jr., Lynn Hancock is a Bluegrass blue-blood through and through. But she's also a savvy businesswoman who is making a mark on the industry in her own right. Alongside brother Arthur and sister Alex, 31-year-old Lynn does everything from managing the property and Stone Farm's social media properties to organizing equine insurance and working the sales.

Growing up on 2,000 acres of prime Bourbon County real estate, Lynn and her five siblings romped around the barns from near-on the time they could walk. She paints an image of a raucous but joyous childhood, alongside her five siblings–sisters Hutchi, Alex, Kate, and Walker, and brother Arthur IV–and under the tutelage of dad Arthur and mom Staci as affectionate patriarch and matriarch. “I mean, I loved growing up at the farm. It was fun, crazy but fun, with all the siblings, and I've always loved the horses and the business,” Hancock recalled, joking that “we were kind of wild children and we would just run around in the yard. It was good; we would go out on the farm with Dad.”

Arthur Hancock III's own rich equine heritage informed the legacy he established for his family. He said, “But, you know, to be born and be on the farm like that, and be around famous horses, to be raised that way, I was very blessed and fortunate that I happened to [come] into the world that way. That's all I really ever knew and listened to every day and grew up in. It was wonderful. And Lynn and Arthur and Alex have more or less been the same, and as little kids, they'd ride around, sometimes look at the mares.”

The youngest of the Hancock brood, Lynn was born after Gato Del Sol (Cougar II)–co-bred by Stone Farm–captured the 1982 GI Kentucky Derby. Arthur Hancock recalled, “I try to pass on what I know and what I've learned. It's like with me–when Gato Del Sol won the Derby back in 1982, I dedicated it to my [late] father, who taught me everything I know and taught me how to get here.”

A toddler when Hancock-co-owned Sunday Silence (Halo) rocketed past Easy Goer (Alydar) to win two-thirds of the 1989 Triple Crown, Lynn admitted, “I was just one and a half when he won the Derby, so I don't remember, but my older sisters do remember.” She does look fondly on the Halo colt's accomplishments, however, saying, “As I've grown up, though, I've loved looking back on it and it's obviously something we're really proud of.” She mused, “My dad always says he really did stake the farm” on Sunday Silence, adding, “My dad tried to get rid of him many times. He accidentally bought him back for a client and then ended up with the horse, so he always says it was fate, and I think that's true.”

One Derby triumph Lynn was old enough to experience came in 2000. That year, Fusaichi Pegasus (Mr. Prospector), co-bred by Stone Farm and Robert and Janice McNair's Stonerside Ltd., took the Run for the Roses. Two years earlier, the Hancocks consigned the Mr. Prospector yearling to the Keeneland July sale.

Out of the Danzig mare Angel Fever, a full-sister to 1992 GI Preakness S. victor Pine Bluff whom Hancock and McNair had bought in 1994, Fusaichi Pegasus fetched $4 million from eventual owner Fusao Sekiguchi. “As a kid, you know, you think you can tell you have a nice horse, but I didn't know much about bloodstock at that point,” she said, adding proudly, “And then, of course, to have him go and succeed and win the Derby, that's the best of all.” Of watching Fusaichi Pegasus's Derby with her family, she said, “I remember it very well, the day, and we were very happy to have a Stone Farm-bred obviously cross the wire first.”

As much as she loves horses, Hancock wanted a change of scenery once she graduated from high school. She attended Sewanee: The University of the South, graduating in 2009 with a degree in art history, and then moved to New York City, working for interior design firm Cullman & Kravis. She lived in the Big Apple for three years, as well as in Los Angeles and Washington, D.C., but Kentucky was calling.

Hancock noted, “I did love doing that, but I knew I didn't want to live in New York [permanently] and I knew I wanted to get back involved with horses and this business and the family farm. Carrying on the legacy, it's important.” Supporting all of her father's hard work is her number one priority, she said: “Obviously, we're very proud of what he's gone out and done on his own. He's just worked so hard. He works every day, seven days a week.” She's also thrilled for the successes of her uncle Seth Hancock and cousins Walker and Allison at neighboring Claiborne Farm. The two nurseries do a lot of business together–the Stone Farm Hancocks own shares in several Claiborne stallions–and each roots for the other.

Hancock herself decided to enter the industry after a visit Down Under. While on a vacation to Australia with a maternal cousin, she decided to check out a Magic Millions sale while there. “I just loved it down there,” she said, “and I started working. I started working for Craig [“Boomer”] Rounsefell of Boomer Bloodstock.” For four months, she worked the sales under Rounsefell's tutelage. “It was my first real, kind of industry gig apart from the farm. I'm good friends with Boomer and he was great to work for, just really interesting to see it from the other side,” she said, adding, “Going around the sales with a buyer and looking at all the things that he looks at, looking at thousands and thousands of yearlings with him, kind of honing my own eye, it was a really valuable experience.”

Hancock worked the Australia sales season–between Magic Millions in January and the Easter sale–twice. She said, “I think going to Australia was really eye-opening for me in terms of the international side of the business. They do such a great job with hospitality, and going down to Magic Millions, it's so fun.” Armed with new connections and knowledge, Hancock returned to Kentucky, eager to help maintain her legacy. She mused, “Ultimately, I just wanted to come back and work for the farm and help keep it going. My dad's 75, and he kind of wants to take a step back, so Arthur and Alex and I are all doing whatever we can to help keep it going.” Enthused Arthur III, “The people who really love you in this world are your family, hopefully, and it means a lot. It's wonderful, that they could be out doing anything and I could be out here as a lonely old man.”

A typical day on the job for Hancock is anything but typical, her responsibilities remaining quite varied. “I'm really interested in the bloodstock side of things, sales, and the racing,” she said. Hancock runs Stone Agency, the farm's equine insurance agency, for their accounts and some clients, assuming the role from her mother, who did that for nearly a quarter of a decade. Sister Alex works in equine management, booking their mares and keeping tabs on vaccinations.

Recently, Lynn's focus has turned to the sales and racing arenas. “My day-to-day fluctuates a lot; it kind of depends on the time of year and whether we're busy foaling or whatnot,” she noted. “I love going out, looking at the weanlings–or yearlings, once they turn yearlings” and foals, she said. In between supervising equine insurance and checking out the next generation of runners, Hancock also manages employees' homes and the entire property. She checks in to make sure everyone's housing is up to snuff, now with some help.

The new year had brought the arrival of one of Arrogate's first foals, born Jan. 25. Out of graded-placed My Dear Venezuela (Wildcat Heir), the colt is “big” and “strong” already, according to Lynn. Arthur Hancock III noted, “He's quite a nice foal and he's got great bone. I said, 'I'm going to nickname him 'Bones' because, I swear, he's got more bone than any foal I ever saw.'”

The following day, Stone Farm-raised Bricks and Mortar (Giant's Causeway) won the inaugural GI Pegasus Turf Cup Invitational S. at Gulfstream Park. “Dad started the farm and has been really fortunate and lucky,” Lynn observed. “There's an element of wanting to keep that alive and keep that going and continue that success, and that can be kind of intimidating in a way, but it's also really exciting and we're fortunate he's built what he has [in] the farm.”