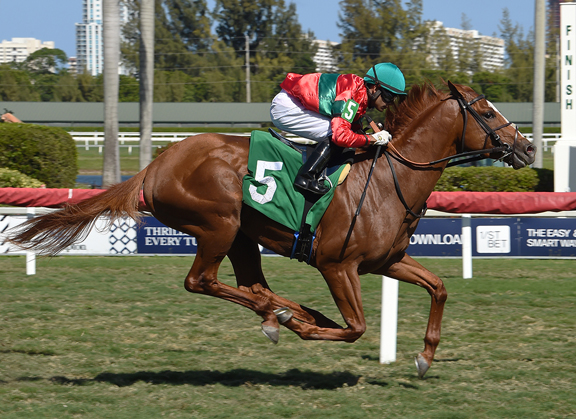 Unbeaten on grass and certainly bred to be any kind, the very promising Golden Tapit (Tapit) posted his second straight decision for trainer Brendan Walsh in impressive fashion over the Gulfstream lawn Saturday.

Off a beat slow–just like he was in his previous attempt while earning his diploma negotiating an additional furlong in Hallandale Feb. 8–the lightly raced 4-year-old son of Broodmare of the Year Fun House was on the move while riding the rail heading into the clubhouse turn in the one-mile allowance.

Under a snug hold by Luis Saez in seventh in a strung-out field of 12 as they flew through fractions of :22.33 and :45.62, Golden Tapit was guided to the outside down the backstretch and immediately caught the eye as he began to wind up while five wide on the far turn. The long-striding, blaze-faced chestnut continued to roll with an over-the-top rally while hanging on his left lead down the stretch and switched over late to win comfortably, earning a very strong 95 Beyer Speed Figure in the process.

“He ran like a horse that's turning into a decent prospect,” Walsh said of the Sumaya US Stables colorbearer. “They were a solid bunch of horses and he beat them pretty impressively. We're very pleased with the way he's gone. He really seemed to like that strong pace in front of him. We'll just see how he comes out of it and decide whether we go into an allowance or try stakes company next time.”

Beaten over 30 lengths while trailing home a field of five on debut for Christophe Clement in the Belmont mud last June, the $275,000 KEESEP yearling purchase joined Walsh's string at Palm Meadows in early November. He posted a 15-1 upset in his first start off the bench while making his grass debut for Walsh last month. The fifth-place finisher that day North Dakota (Medaglia d'Oro), a half-brother to leading sire War Front, returned with a facile maiden win across town at Tampa Bay Wednesday afternoon.

“His pedigree is fantastic and he's a good-looking horse, so you always hope that the likes of him are going to turn up with the talent,” Walsh said. “Once we started working him on the grass, he seemed to love it. We were lucky enough to get him. He's for a really good owner (Oussama Aboughazale), who deserves some luck. Maybe we can have some with this guy.”

With so many racing schedules either on hold or in question as the COVID-19 outbreak continues to turn everyday life completely upside down, Walsh is just taking things day by day at this point.

“We're all in a little bit of a wait-and-see pattern right now with everything, really,” said Walsh, who also campaigns unbeaten GI Kentucky Derby prospect Maxfield (Street Sense). “We need to get over this horrible thing that's going on at the moment and try to keep everybody healthy. I think that's the number one priority right now. Hopefully, things open up again in the not-too-distant future.”