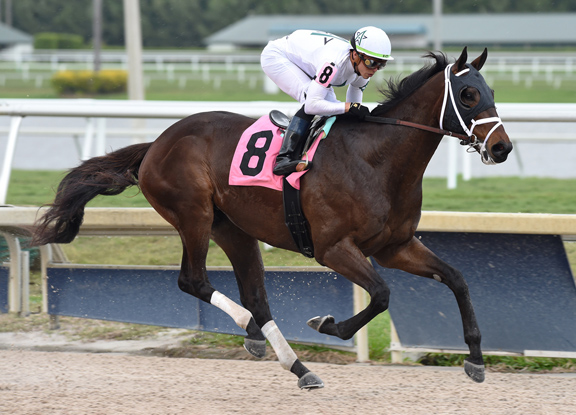 While the talented 'TDN Rising Star' Diversify (Bellamy Road) eventually changed hands as a racing prospect at the 2016 Keeneland November Sale prior to posting a pair of Grade I victories for Ralph and Lauren Evans, Kenny Troutt's operation was represented by the promising blowout allowance optional claiming winner Fearless (Ghostzapper) at Gulfstream Saturday.

The unbeaten 4-year-old gelding, campaigned in partnership with China Horse Club International, earned an eye-catching 99 Beyer Speed Figure while making his two-turn debut for trainer Todd Pletcher on the GIII Holy Bull S. undercard. He was previously a hard-fought maiden winner while making his belated debut sprinting in Hallandale Dec. 22.

“We were very pleased with his race–it's nice to see a horse run well that you've given a lot of time to and shown some patience with,” WinStar Farm's President/CEO & Racing Manager Elliott Walden said. “We're excited about his future.”

Fearless, a $725,000 KEESEP yearling graduate boasting a stallion's pedigree out of the multiple Grade I-placed Street Cry (Ire) mare And Why Not, was stopped and started on no fewer than four times, including three trips to the Pletcher barn before the decision was made to geld him.

“I don't have any regrets about gelding him now, even though it hurts a little bit, but we did it for the right reason,” Walden said.

“He wasn't impossible to train. It was a combination of him not really wanting to train and him being such a big, heavy kind of horse that it kept causing him problems that he just never was moving great. We just felt like he needed to be a gelding. We give our horses every chance to be colts.”

Walden didn't have any particular future targets in mind yet for Fearless, but the hopes are certainly high.

“He came out of the race good,” Walden concluded. “We'll pencil something in. It sure is exciting. Hopefully, it's a great story. We gelded Diversify and he went on to become a two-time Grade I winner. Hopefully, this horse will do the same.”

4th-Gulfstream, $45,400, Alw (NW1$X)/Opt. Clm ($25,000), 2-1, 4yo/up, 1 1/16m, 1:42.13, ft.
FEARLESS (g, 4, Ghostzapper–And Why Not {MGISP, $262,965}, by Street Cry {Ire}) won on debut going six panels over this strip Dec. 22 and was given a 3-1 chance for this stretch out in distance. Away alertly from the outside post in this eight-horse affair, the $725,000 KEESEP buy showed good early initiative, pressing from a head second through opening splits of :23.65 and :46.48. Still just loping along as he took control on the backstretch, the dark bay effortlessly sailed clear under a hand ride from Irad Ortiz and crossed the line with his ears pricked, finishing 8 1/2 lengths clear of Winking At Thedude (First Dude). His MGISP dam And Why Not, herself a $775,000 FTSAUG purchase, is also responsible for the GSP 5-year-old Just Whistle; an unraced sophomore filly named Choosy (Super Saver), who was purchased by Sallusto and Albina for $25,000 at the recent KEEJAN sale; a juvenile filly named Potion (Ghostzapper); and a yearling filly by Candy Ride (Arg). The half-sister to GSW Far From Over (Blame) was bred back to Blame. This is also the family of MGISW Aldiza (Storm Cat); MGSWs Timeline (Hard Spun) and Aurelia's Belle (Lemon Drop Kid); and GSWs Altesse (A.P. Indy) and Lone Sailor (Majestic Warrior). Sales history: $725,000 Ylg '17 KEESEP. Lifetime Record: 2-2-0-0, $50,400. Click for the Equibase.com chart or VIDEO, sponsored by Fasig-Tipton.
O-China Horse Club International Ltd. & WinStar Farm LLC; B-Helen K. Groves Revocable Trust (KY); T-Todd A. Pletcher.