In Sharper Focus: Eve of War 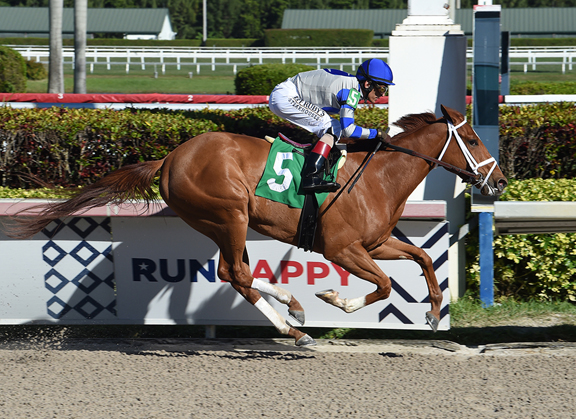 Eve of War (Declaration of War) announced her presence by dusting six rivals in front-running fashion on debut for trainer Todd Pletcher at Gulfstream Park Sunday. The Jeff Treadway homebred earned an eye-opening 88 Beyer Speed Figure in the six-furlong affair.

For comparison, Harvey's Lil Goil was awarded an 82 Beyer in Sunday's Busanda S. at Aqueduct while Taraz earned an 85 rating in Oaklawn's Martha Washington S. Saturday. Both of those races were contested around two turns.

“It was certainly visually impressive and she was very professional throughout,” Treadway said of Eve of War's unveiling. “It seemed like she stumbled a bit at the break and rushed up between horses and was able to dominate the race from there. She's always been a physical standout and had been working extremely well recently, but they don't always run the way you picture it the night before like that.”

As for future plans, Treadway continued, “I think two turns is definitely the goal. She's bred for it and, although there's a lot of power there, she's a really nice mover and she should be able to get more distance. There's obviously the [GII] Davona Dale [S. going a mile at Gulfstream Feb. 29]; or potentially a N1X going long down there if there's one early in the next book. The figure came back strong and seems to compare well with this crop of stakes fillies, but I'll leave that decision up to Todd.”

Eve of War was up to four furlongs at Saratoga late last summer, but didn't re-emerge on the worktab until posting a three-furlong breeze at Palm Beach Downs Dec. 10. She had eight listed works at Pletcher's South Florida base prior to her sparkling debut.

“She had some typical baby things and just needed some time,” Treadway said. “Being a big filly, I think she really benefitted from the time off.”

Eve of War's dam Special Thanks (Broken Vow), a daughter of four-time graded winner Bedanken (Geri), never made the races after bringing $115,000 as yearling from Treadway at the 2013 KEESEP Sale.

“Her dam Special Thanks is a big, beautiful Broken Vow mare that I bought as a yearling,” Treadway said. “She ultimately had an ankle issue that prevented her from racing. Special Thanks is out of the multiple graded stakes-winning turf mare Bedanken, so I definitely had grass in mind, but Eve of War has always gotten over the dirt extremely well. The Declaration of Wars seem to be doing everything these days–and well.”

6th-Gulfstream, $43,000, Msw, 2-2, 3yo, f, 6f, 1:11.01, ft.
EVE OF WAR (f, 3, Declaration of War–Special Thanks, by Broken Vow) was pounded down to even-money off a steady, if not overly quick series of drills at Palm Beach Downs (click for XBTV video), but she showed plenty of zip in the afternoon to run up the score Sunday. Slicing through foes soon after the start to take over, she sped away by several lengths heading to the turn and always appeared in a race of her own from that point forward. Ridden out with hands and heels after posting a :46.11 half, she cruised to the line 7 1/2 lengths to the good of firster and $400,000 KEESEP yearling Skinny Dip (Into Mischief). The winner's dam is the first foal out of an unraced daughter of MGSW Bedanken (Geri), who cost $115,000 as a yearling. Her Street Sense filly cost just $22,000 at the 2019 Keeneland September sale. After producing an Air Force Blue filly last season she was bred back to Hard Spun. Lifetime Record: 1-1-0-0, $25,800. Click for the Equibase.com chart or VIDEO, sponsored by Fasig-Tipton.
O-Treadway Racing Stable; B-Jeff Treadway (KY); T-Todd A. Pletcher.