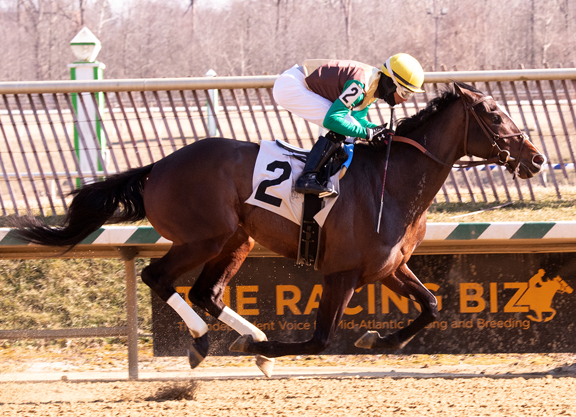 When Gregory and Caroline Bentley acquired Alwaysmining (Stay Thirsty) privately after a maiden win at Laurel last June, the couple hoped they had added a nice Maryland-bred to their racing stable. Eight months and three stakes wins later, the sophomore gelding is clearly exceeding expectations, putting himself on the early stages of the Triple Crown trail with a 4 1/2-length victory in Saturday's Miracle Wood S. at Laurel Park.

“To say he has exceeded our expectations is an understatement, I think,” admitted the Bentleys' racing manager Joe Cassidy. “He has just been amazing. [Trainer] Kelly Rubley has done a fabulous job, beyond anything that we could have imagined. All the credit goes to her.”

Jim McIngvale purchased Alwaysmining for $130,000 at the 2017 Keeneland September Yearling Sale. The dark bay made his first three starts in Kentucky before returning to Maryland to break his maiden at Laurel last summer.

“I always follow the maiden races and allowance races, especially for young horses because we have been looking for dirt 2-year-olds, fillies or colts,” Cassidy said. “I saw that Alwaysmining was coming out of Kentucky, the people racing him were running in Kentucky and they were shipping him to Maryland because he's a Maryland-bred. We figured that maybe they wanted to sell him, so we called them up. It was pretty simple and he looked like a nice enough horse.”

With a Pennsylvania-based broodmare band of some 15 head, Cassidy agreed Alwaysmining status as a Maryland-bred was a major attraction.

“We run in Maryland and PA, we like all the state programs–it helps a lot,” he said.

Alwaysmining was off the board in his first two outings for the Bentleys' Runnymede Racing, including a seventh-place effort over the turf in the Laurel Futurity in September. But he romped home a front-running 10-length winner of a one-mile optional claimer Oct. 27 before scoring a stakes win versus fellow Maryland-breds in the Dec. 8 Maryland Juvenile Futurity. He ended his juvenile campaign with a 1 1/2-length win in the Dec. 29 Heft S.

Cassidy and the Bentleys were so impressed with Alwaysmining's accomplishments, they purchased the gelding's yearling half-sister by Fast Anna for $100,000 at last month's Keeneland January sale.

“We paid a little more than we thought we'd have to, but good horses cost money,” Cassidy said. “I had a friend in Kentucky who looked at her for us and he said he loved her. We were expecting to give a little less, but with what we thought the upside of Alwaysmining was, we figured we really wanted her. And she's a lovely filly. The plan is to race her and then put her in the broodmare band.”

Involved in horse racing since the mid-1990s when Gregory was looking for a hobby away from his family's software company, the Bentleys purchased the 550-acre Runnymede Farm in Chester County in 2013. Their success to date has mostly been with turf horses. They were co-owners of 2014 GI Arlington Million winner Hardest Core (Hard Spun) and Postulation (Harlan's Holiday) carried their colors to victory in the 2017 GIII American St. Leger S. winner.

The operation is now focused on increasing its options for dirt racing, according to Cassidy.

“Mr. and Mrs. Bentley are breeding, we have a bunch of mares in foal–I think we are dropping eight babies this year,” Cassidy said. “And most of them are leaning towards dirt pedigrees. We do have a few that are turf, but they want, if they are turf horses, to be able to stay in the race when it comes off the turf. In the last couple of years, it's been tough with all the rain and a lot of races were washed off. It was discouraging to them. So, they were looking for more options.”

The Bentleys added a few broodmares to the band at the Keeneland sales this winter and the plan is primarily to breed to race, while still keeping all options on the table.

“I'm not saying you won't see any in the sales because it gets to be a lot of horses and it gets to be expensive,” Cassidy said. “They are breeding to very nice horses, so there is a chance they will want to recoup money. But it's so new. It's a project that is just getting off the ground. We are open to anything and things are very fluid in that respect.”

Runnymede Racing currently has six horses in training, but it is Alwaysmining who is carrying the team at the moment.

“Most are coming off a layoff or some little nagging problems, so the only one that is running currently is Alwaysmining,” Cassidy said of the racing stable. “But what a luxury and a treat to have him. He's just a cool horse. When the race is over, he's back to being Mr. Cool. But he is competitive, isn't he?”

The water will only get deeper for Alwaysmining, both in terms of distance and competition. His likely next start will be the 1 1/16-mile Private Terms S. Mar. 16.

“It's only the first day after he ran, but originally when I sat down with Kelly and the Bentleys after the Heft S., we kind of looked at the Maryland program for getting him to wherever he was going to go. It was this race and then the Private Terms. We have him nominated for a bunch of stakes, but the Private Terms would probably be the closest that we have talked the most about. We do want to get him two turns, we haven't seen if he can do two turns yet. And we're going to have to take on tougher competition. The competition gets a little tougher each time.”