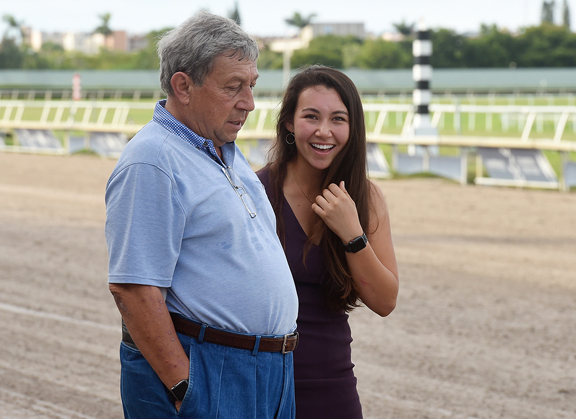 While it seems that some trainers cannot have enough time off between races, Patrick Biancone will go against conventional wisdom Wednesday at Gulfstream. He has entered Sole Volante (Karakontie {Jpn}) in a $55,000 allowance race he will use as a prep for the GI Belmont S. run just 10 days later.

“What, you never heard of Woody Stephens?” Biancone joked.

Stephens was never shy about running horses back on short rest and in 1982 won the GI Metropolitan H. with Conquistador Cielo on a Monday and then the Belmont five days later. But, 38 years later, it's almost unheard of for a trainer to schedule two races just 10 days apart. But Biancone isn't afraid to go against conventional wisdom, not when he thinks it will give him the best chance of winning the Belmont.

“I'm not trying to prove anything,” said Biancone, who has also entered Ete Indien (Summer Front) in the one-mile race. “I am trying to do the best I can for my horses and clients. I will be right or wrong. We'll see what he does in the big race. That will prove me right or wrong.”

Sole Volante has not run since finishing second in the GII Tampa Bay Derby Mar. 7. Biancone said he has had to adjust his work schedule because of wet weather in South Florida.

“He was supposed to have a very strong work last Wednesday, but there was a lot of rain and the track was no good,” he said. “I was fortunate enough that Gulfstream wrote this race. He has not run in more than 90 days and he missed a workout. That's a lot to ask to go across the country and run in a Group I.”

The plan Wednesday will be to give Sole Volante a tightener that will have him at his best in the June 20 Belmont.

“I need a race and I'm not going to go across the country with my two nice horses (Sole Volante and Ete Indien) without being sure they can perform perfectly,” the trainer said. “The plan is to give them a good race, see how they come out of it and if everything goes as planned Sole Volante will run in the Belmont. I'm just trying to do what I think is best for the horse.”

While Biancone is not content to go into the Belmont off a 3 1/2-month layoff, other trainers don't appear to be concerned that their horses have not raced recently. Tiz the Law (Constitution), the likely favorite in the race, will be coming in off a 12-week layoff. Max Player (Honor Code) will be making his first start since winning the Feb. 1 GIII Withers at Aqueduct.

It would be hard to find a tougher allowance race than the one set to go Wednesday at Gulfstream. Five of the seven starters are stakes winners. Ete Indien won the GII Fountain of Youth S. and Shivaree (Awesome of Course) was second in the GI Florida Derby. The race is restricted to 3 year olds.

Biancone is pointing Ete Indien to the GI Haskell July 18 at Monmouth. He has not started since finishing third in the Florida Derby Mar. 28.

“My horses need a race and Gulfstream was nice enough to write a race for us in case we needed it, and we need it,” Biancone said.

Trainer Ralph Nicks said there is a possibility that Shivaree will also come back for the Belmont. In November, Shivaree won the Buffalo Man S. at Gulfstream off a seven-day layoff.

“I'd say it's doubtful that we will come back for the Belmont, but I wouldn't rule it out,” Nicks said. “We raced him back one time in seven days and he won a stakes, so we know he can do it. The problem would be the shipping. If he doesn't run in the Belmont we will look at the Haskell of the (GII) Blue Grass.”